Gigs you can do by bike

You don't need a car to make some extra cash

When people think of the gig economy, Uber and Lyft normally pop into mind first, and often exclusively. What many people don’t realize is that there are literally thousands of companies humming away in the gig economy right now, companies ranging from food delivery to doctors on call.

We’re all familiar with Uber and Lyft, where the work requires a car, minivan or SUV. We know about Amazon’s package delivery service, called Flex, which also requires some type of motorized vehicle. But, what you may not know is there are even gigs you can do with a bicycle!

Most bike-based gigs are going to be found in densely-populated urban areas. That’s because a bike gig won’t work very well in the suburbs where the distances are too great for bikes to handle in a short period of time. But in downtown metropolitan areas of large cities, bike gigs are a natural.

San Francisco, Chicago, Dallas, Atlanta and of course New York City have such areas. If you can hop on a bike, pick up a small package, throw it over your shoulder and bike over to the customer’s location within about 15 minutes, you’re good to go with one of the food delivery or errand services.

The biggest companies in the food delivery market are DoorDash, Postmates and Uber Eats.

Each service has its own rules on a city-by-city basis. They may allow bike deliveries in some cities but not others, so you’ll have to check with each service to see what their rules are in the city where you want to work.

There are many task and errand companies, the best-known of which is TaskRabbit. But there is also Thumbtack, Handy, Angie’s List and Handyman, among others. Depending on the distance between you and your customers, you could possibly use a bike with some of these gigs. That’s because you won’t necessarily need a car to transport anything around at the customer’s request.

Most of these gigs are ones where you show up at the customer’s location and perform some task for them. You might need a car for some of these tasks, however, if you need to bring tools along.

If these customers require a car, they’ll let you know in their requests, and you as a “tasker” would also be able to say in your description that you don’t have a car.

With TaskRabbit, as well as some of the other “task” companies, your bike would be used simply as your way of getting to the customer’s location. TaskRabbit has many jobs where you show up at the person’s home or office and complete the task on location using tools provided by the customer. As long as you have let TaskRabbit and the other companies know what areas you’re available to work in and that you’re going to be using a bike rather than a car, they’ll match you up only with jobs that are compatible with those requirements.

Handy and Handyman are pretty much what the names imply. They provide jobs to workers who will show up at the customer’s location and usually fix something like a broken toilet or an electrical outlet that has gone bad. It’s possible you might need a car or truck for your tools, but that would be at your discretion. You could make a decision on a job-by-job basis.

Thumbtack and Angie’s List are other handyman-type services. They work with plumbers, electricians and various kinds of contractors that normally do home improvement and home repair work. 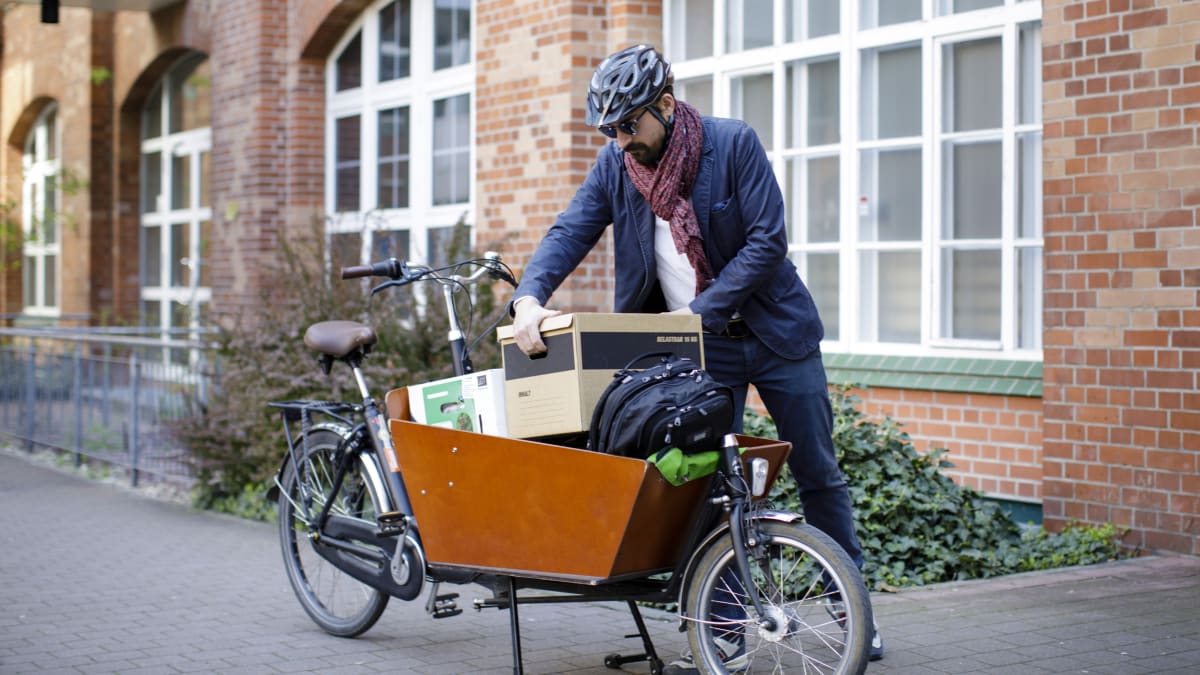 If you really want to get creative with the bike thing and are determined to do gig work with a bike, how about using a cargo bike to charge scooters? Scooter companies like Bird, Lime and Jump use gig workers to charge the scooter batteries every night.

This entails picking up as many scooters as you can (hence the need for a cargo bike), taking them back to your place and charging them for five to six hours. Once they’re all charged, you’ll take them back out and leave them in designated areas. But they have to be back out first thing in the morning, like by 4:00 a.m.

The companies pay a fee for each scooter you charge. The fees vary based on a number of factors, including how hard their algorithm estimates the scooter will be to find, or how far off the beaten track it is.

Another scooter-related job is as a scooter “minder” or “watcher.” In this job, you would look for scooters that are poorly parked or not in a good location and move them to a location designated by the company as a preferred parking area. This job doesn’t involve carrying the scooters back to your home or charging them overnight or returning them very early the next morning, but it does involve carrying them from one place to another. So a cargo bike would be needed here too – if you really must do it by bike.

For charging, companies like Bird pay from $5 to $20 per scooter, although the $20 gigs are obviously rarer than the $5 ones. They do come up from time to time, but you are much more likely to earn on the lower end of the scale.

Some scooter chargers have claimed that they’re able to charge up to 40 scooters a night, earning around $200. However, our man on the street says that it’s very hard to believe anyone does that with any consistency. It’s possible to do it every now and then, but very difficult to do it night in and night out.

You should be able to rack up about 10 scooters on a cargo bike. If you’re going to do 40 a night, that’s 4 round trips – which is probably nearly impossible. But you could do maybe 20, which wouldn’t be too bad.

Working as a courier is probably the most obvious gig job you can do with a bike. Bicycle couriers have long existed in urban areas and are thriving in the gig economy as well. Uber has flirted with offering a courier service through its app. They gave it a try in Manhattan for a couple of years, under the name of UberRush, but gave up on it after a while.

Postmates, though, is sticking with it. You may think of Postmates primarily as a food delivery service, but their focus is really on delivering anything. Their slogan says it all: “Anything, anytime, anywhere. Postmate it.”

If you really must find a gig opportunity that only requires a bike, you can do so with a little creativity. We’ve given you some ideas here, but there are always new companies and new opportunities opening up. So, keep your eyes open, think out of the box, be creative, and you should be able to put that bike to good use soon.