Now that is definitely not stock 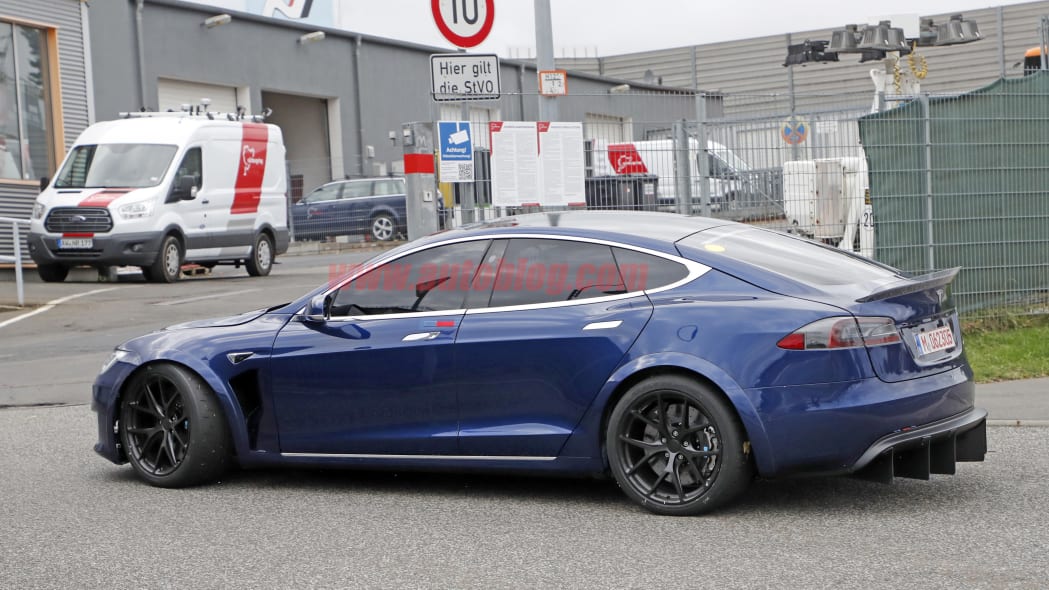 Tesla is back at the Nürburgring. After the automaker took a brief break in testing for an attempt at a new Ring EV production-car record lap, our spy shooters caught a couple of new test cars running around the German racetrack. This time the cars look even more like race cars, with one sporting a diffuser the size of a bus. Seriously, the blue Model S pictured here has a diffuser of massive proportions that’d look more at home on a race car than this application.

The air outlets in the front fenders look wide enough to throw a cat (or two) through. That’s something we didn’t see before, suggesting Tesla is trying to aid cooling to the massive brakes we can see inside the wheels. Huge calipers and drilled rotors also appear to be along for the ride this time. We can’t make out what tire Tesla is running, but they look like high performance summer tires with next to no tread — see the close-up shot of the front tire turned, showing the tread pattern to us. Just like in our previous set of spy shots, this car is also sporting fender extensions to fit the wider tires underneath.

And similar to the last blue Model S we spied on the Nürburgring, this one has an extra tall rear spoiler. Tesla uses a clear extension on the spoiler itself to make the duckbill stick out just that tiniest bit further. As for the front of the car, Tesla didn’t do much besides open up the front side air intakes a bit further by eliminating some cross bars that used to be there. Sure, the car as a whole looks a bit unfinished, but it’s also sort of badass in a weird way. All the visible modifications are there to increase cooling and suck it to the ground, and this latest iteration takes a big step beyond what we saw before. The red Model S in the gallery above eschews the rear diffuser for a more street-friendly rear end, but it’s still a rather racy looking Model S.

It’s neat to see Tesla bringing the fight to Porsche with such dedication like this, but we’ll reserve final judgement until a Model S like this hits the streets in production form. Until then, they’re prototypes with a story that we’ll eagerly follow.