Lots of LEDs, lots of range for this S-Class EV 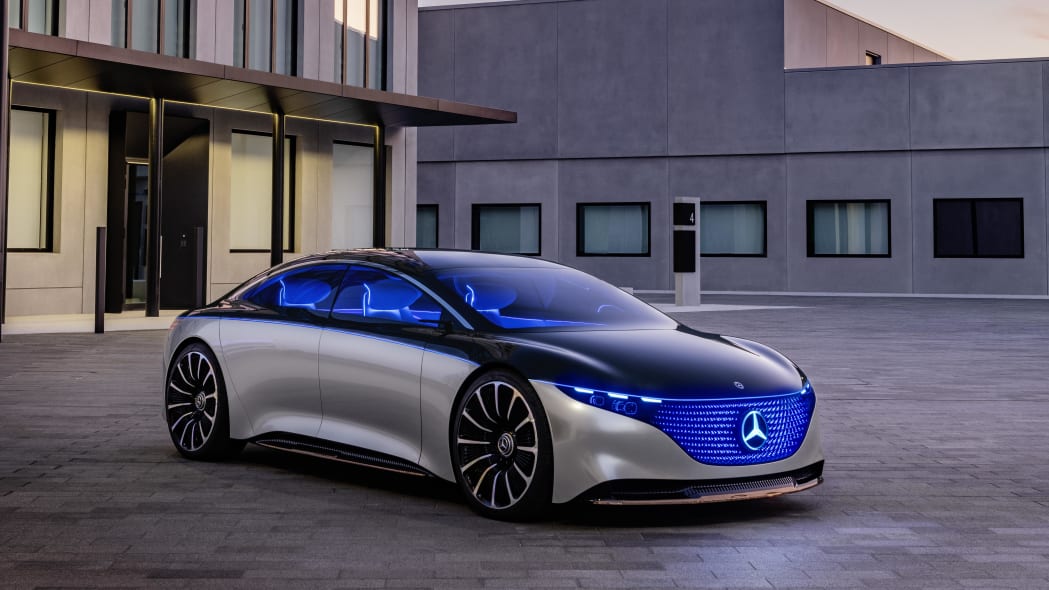 The Mercedes-Benz Vision EQS is officially out, and it’s quite the light show. Literally. This car is lit. Alright, we’ll stop, and we apologize. This car is a concept for a vehicle we fully expect to see on the road one day with the EQS name and badge. We’ve even seen spy shots of the production EQS out testing, so we know something resembling this car is on its way.

Starting with the specs, they are impressive. Mercedes says energy comes via a 100 kWh (approximately) battery pack, giving the concept a 435-mile range on a full charge. That figure is what Mercedes says it’s capable of on WLTP standards. The dual electric motors (one on the front axle and the other on the rear) make a combined 469 horsepower and 560 pound-feet of torque. This propels the Vision EQS to 60 mph in “under 4.5 seconds” with a top speed somewhere just north of 124 mph. Mercedes doesn’t say how or when it’ll be capable of this, but the car is apparently also capable of fast charging at 350 kW. That allows for a 0-80 percent charge in under 20 minutes. Impressive stuff, if Mercedes can make it happen.

It’s safe to say that the specs are there, but then we get to the looks. Mercedes created a striking design. From the side, it’s actually a palindrome of a car. We’re using this metaphor to say it looks the same front and back in profile. You can easily tell which way is forward from the slightly longer hood, but it’s rather symmetrical when split at the doors.

Back to the lights, though. Mercedes says the car has an absolutely absurd 940 individual LEDs on the black panel grille. Then there are 229 individual LED stars on the rear and a “lightbelt” that joins the front lights to the rear. Yes, it wraps all the way around the car. The coolest lighting trick of them all are the Digital Light headlights, though. Each unit has four holographic lens modules that rotate at over 2,000 rpm. This quick rotation makes the human eye perceive a static image. The trick here is that those holographic modules are able to produce images of things that appear to float in space. The possibilities are limitless here, as the light modules can be used to communicate to other drivers on the road with light using any image one can think of. Count on U.S. regulating agencies to approve this headlight technology in a century or two.

We got to see the interior a few days ago, but it’s worth revisiting with the official reveal. Before you ask, there are obviously more lights in here, but we’ll focus on the design. In a word, we’d describe it as stunning. Mercedes says Level 3 autonomy is baked in, but there’s still a clear emphasis on the driver being in control. The three-pointed-star wanted to be clear that it’s still focusing on making cars desirable and fun to drive, even if you’re going to be ensconced in something like this. When it comes to the screens and infotainment system, Mercedes says this car is a glimpse into the future of MBUX. Just like the next-gen C-Class and S-Class sedans we’ve spied, this one is all touchscreen controlled.

It’s not exactly clear when the production version of the concept is coming, but it sure does remind us of the original CLS-Class with the long, drooping coupe-like shape. Mercedes continues to surprise us with new lighting technologies, too. We can’t wait to see what the Germans come up with next.