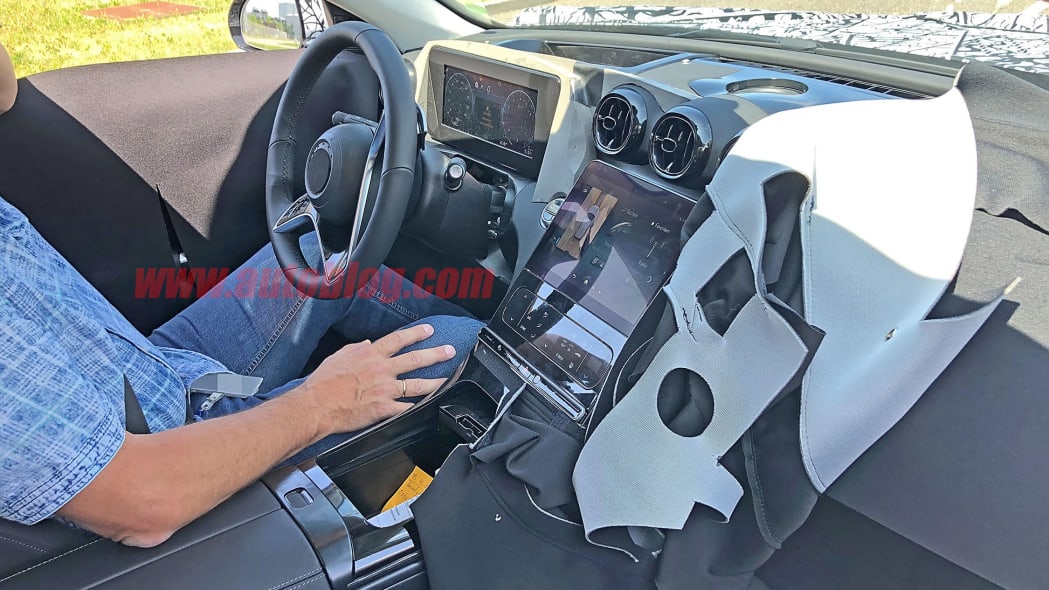 Here’s your first glimpse inside the next-gen Mercedes-Benz C-Class. If you recall the S-Class spy shots we’ve seen, this interior appears to be going in the same direction. The S-Class had a much larger center screen, but this setup just looks like a scaled-down version of the larger sedan.

Mercedes’ fancy MBUX infotainment system looks like it’s transitioning to a new iteration, and this version will clearly support touchscreen functionality. Any pretense of a dial or touchpad has been removed — it’s interesting to see Mercedes head in this direction as a company like Mazda does the opposite, saying touchscreens are distracting. All the German luxury brands are going all-in on touch controls, Porsche included.

Below the main touchscreen is a dedicated climate control area. These also don’t look like physical buttons. Instead, we think they’re probably touch sensitive, providing haptic feedback as confirmation of a “press.” Below this section are a few more buttons, with one of them looking like a drive mode selector. Keeping this button/not-a-button talk going, that’s an absolute unit of a push-button start off to the left of the touchscreen. It protrudes from the dash, is much larger than the current Mercedes start/stop buttons and is also a big departure in design.

Other interior touches we’ll note are the two prominent air vents sitting just above the touchscreen and the completely digital instrument cluster. The C-Class has an all-digital cluster available now, but this screen looks updated to new software with the new MBUX infotainment that’s clearly onboard.

As for the exterior design, there isn’t much new to see here beyond what our last C-Class spy shots post showed. It looks just how we’d expect a C-Class to appear, and that’s perfectly fine. New design elements will appear as the car gets closer to production.