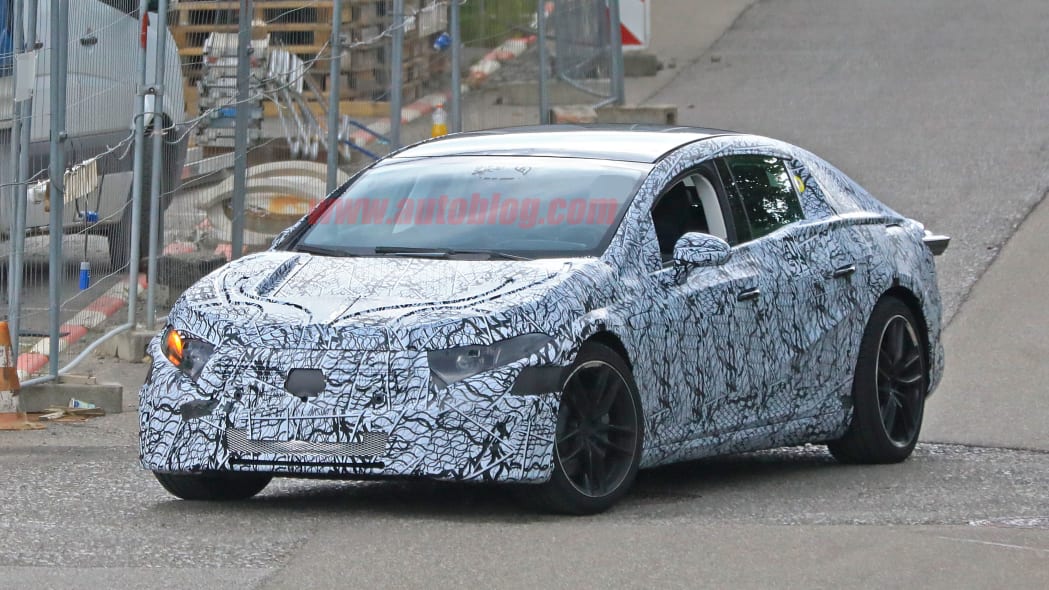 There will be a couple of Mercedes flagship luxury cars in the three-pointed star’s lineup eventually. One will be the traditional S-Class, and the other is the prototype you’re looking at now. It’s the Mercedes EQS, and it’s going to be all-electric. We’re looking at the first spy photos showing a production body, so take it all in. This is what Mercedes will be putting forth to take on cars like the Tesla Model S, Porsche Taycan and Audi E-Tron GT (whenever the latter two come out).

It may be in heavy camouflage, but we can get a general idea of the body style and shape Mercedes is going with. If we had to guess at the car’s size, we’d say it’s a tad shorter than the long S-Class is today. The car is rumored to use Mercedes’ modular electric platform, so we expect space to be efficiently used, similar to other electric cars with totally flat floors housing the battery pack. One bit that looks slightly concerning to us is the photo of the EQS with its hood up. There’s a ton of equipment where you would expect an engine to be, and that’s the worrisome part. Many electric cars use a front trunk for more space, and we’d love for the big Mercedes EV to do the same. Perhaps it’s just full of equipment that will come out when Mercedes transitions to more production-ready prototypes. It seems highly unlikely that Mercedes would design an entirely new electric platform and not find room for a frunk, but we’ll just have to wait and see.

What we are excited about is the obvious hatchback. That means more space for our stuff, and we just love the shape of a sportback body design in general. Another photo shows off the frameless doors on the EQS, which is always a wonderful look on any car. We’re also fans of what appears to be a super-low hood design. Without an engine under there, Mercedes looks like it’s trying to maximize forward visibility. It’ll probably be slightly more difficult to see out the severely raked rear window, but this car is bound to have cameras aplenty.

We wish we knew when this electric car was coming out, but Mercedes hasn’t given an exact timeframe yet. When it does, it no doubt will offer up the absolute peak of what Mercedes luxury is capable of producing. Expect a couple of electric motors providing all-wheel drive and big power. And a floor lined with batteries should provide for some of the most adept handling by any big Benz ever.

For the time being, Tesla is safe, but you’re looking at just one of its foes slowly approaching in its rearview mirror.