Volkswagen ID.3 electric hatch revealed with up to 342 miles of range

It's about the size of a Golf

Three years after the very first Volkswagen I.D. Concept was revealed in Paris, the production-ready VW ID.3 has been revealed in Frankfurt. From the outside, it looks very much like the concept save for more conventional grille inlets in the front bumper. It looks a little like a cross between a VW Golf and a Chevy Bolt EV. Size-wise, the ID.3 is nearly identical to the current Golf except for the wheelbase, which is five inches longer.

There are a couple of key exterior design highlights, including LED headlight units that feature a nifty light bar across the middle. Being matrix LED headlights, they adapt to reduce glare for oncoming traffic, but VW also uses the LEDs to create a "fluttering of the eyelids" when the driver approaches. Around at the back, the ID.3 features a unique glass hatch, something we haven't seen in America since the Volvo C30 hatchback. 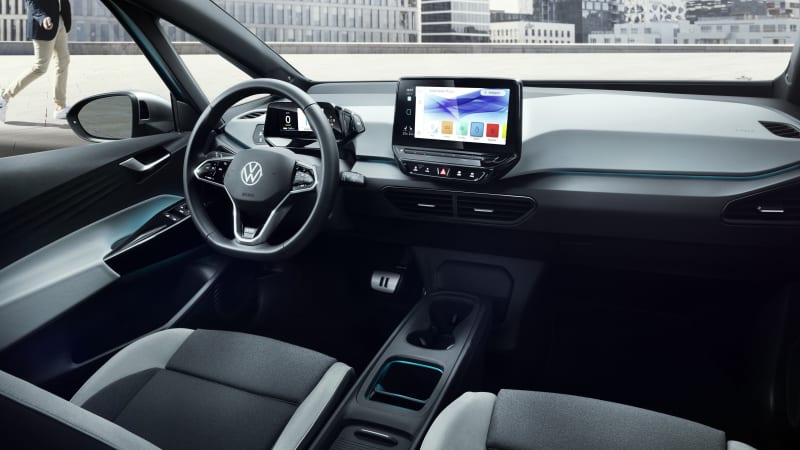 The interior is spare and modern. The instrument cluster uses a thin screen and the shifter hangs off it. In the center stack is a large 10-inch touchscreen. Higher-trim versions of the ID.3 will be available with a heads-up display that features augmented reality navigation information. This information will be projected so that it looks like it's placed about 9 to 30 feet ahead of the car. All of the buttons and switches in the cabin are touch sensitive except for the hazard light and window switches. There is voice control as well. There's seating for 5 and behind the rear seats is 13.6 cubic feet of cargo space by European measurements.

But the vital stats of any EV are the motor and battery pack. All ID.3s will get a permanent-magnet motor mounted in the rear with a single-speed transmission. It makes 201 horsepower and 229 pound-feet of torque and will be able to power the ID.3 to a top speed of 99 mph.

The ID.3 will initially be offered with only a 58-kWh battery that provides an estimated range of 261 miles on European testing. The Bolt EV and Hyundai Kona Electric deliver similar numbers in U.S. testing with 60-kWh and 64-kWh batteries, respectively. Two other battery pack capacities will be available later on the ID.3, though: a cheaper 45-kWh version with 205 miles of range and a more expensive 77-kWh version with a whopping range of 342 miles. 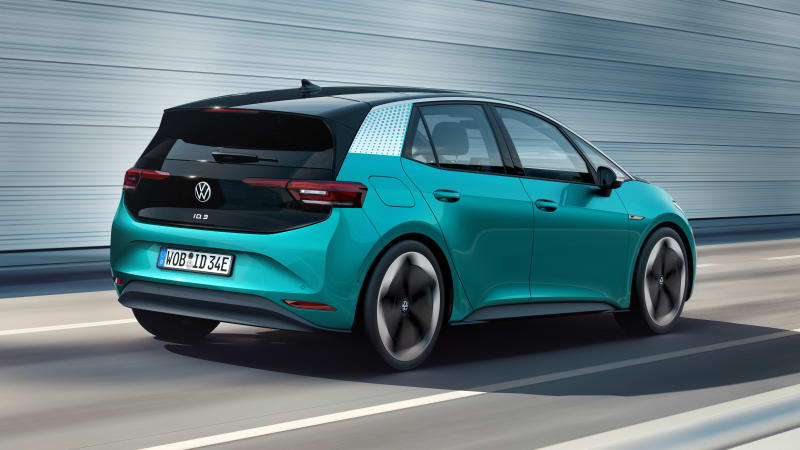 The ID.3 will offer a DC fast charging option for models with batteries up to the 58-kWh capacity that can use 100 kW charging rates. VW says this will let the ID.3 regain 180 miles of range in about 30 minutes. The 77-kWh model will be available with 125-kW fast charging compatibility.

Volkswagen hasn't announced any plans for selling the ID.3 in the U.S. Instead, our first ID model will be a production version of the ID.Crozz, followed by the ID.Buzz minivan. In Germany, the ID.3 will go on sale in mid-2020. It will have a base price under 30,000 Euros, which would be less than about $33,000. That price is before any tax incentives or subsidies.