Porsche 911 rally car outraced them all, is headed to Bonhams' Goodwood auction

Has done more competitive miles than any other Porsche 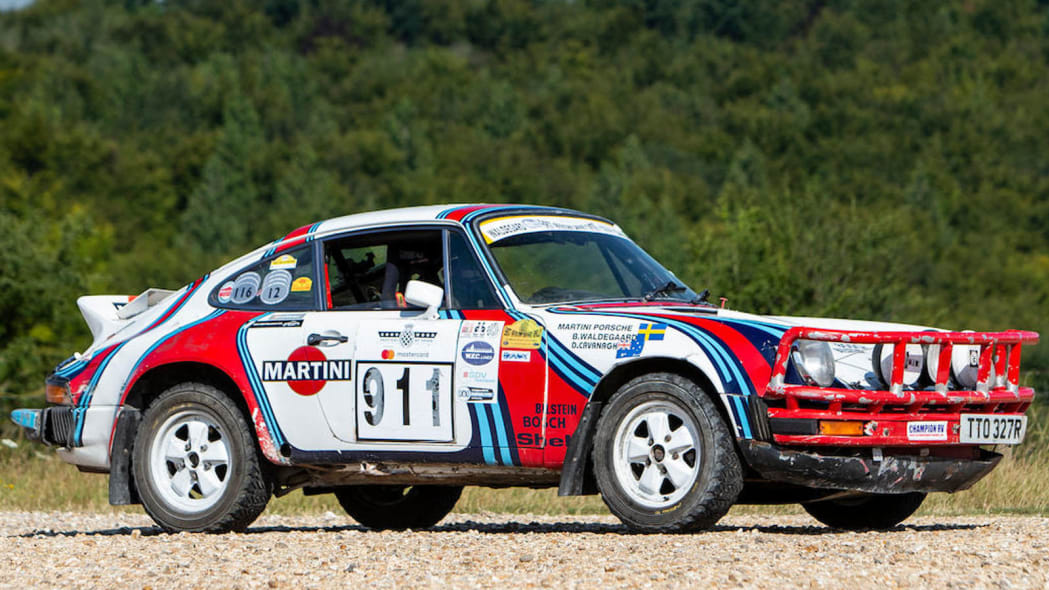 Bonhams says this 1976 Porsche 911 rally car has done "more competitive kilometers than any other Porsche," and the auction house has documentation to prove it. The globetrotting, high-rise 911 with a 3.0-liter flat-six was delivered to Polish rally driver Sobislav Zasada, and he and co-driver Wojciecj Schramm entered it in the 1977 London-Sydney Marathon. That single event put more than 18,500 racing miles on the chassis, with Zasada and Schramm leading all the way into Australia before bogging down in deep sand Down Under.

Porsche Australia bought the car at the rally's end and converted it to right-hand drive for Aussie Dean Rainsford to contest the 1978 Australian Rally Championship. Rainsford entered the coupe in the Repco Reliability Trial in 1979, an 11,600-mile race around the continent. Michael Stilwell bought the car after that tilt, and over the next six years put another 36,700 racing miles on the 911. Porsche Australia rebuilt the car again before it competed in the 1985 Wynn's Safari Rally, and again after the rally but with Porsche Works 953-series 911 Dakar components, then entered the Safari Rally once more in 1988.

By 1994, the 911 was doing historic races, taking on the Targa Tasmania before going on display for four years at the Sydney Motor Museum. In 2000, the car was shipped to the UK, upgraded to FIA spec, and had its original engine replaced by a period-correct flat-six. Come 2002, it was back to the grind in the Circuit of Ireland Rally. Two years later, the 28-year-old coupe returned to the scene of its first crime, running the London-Sydney Marathon in 2004 and winning its class.

A round-the-world trip to Perth, Australia, for yet another rebuild led to more demo runs back in the UK, then the 2005 East African Classic Safari Rally, then another rebuild. According to the Bonhams description, it sounds like life's been easier since, with historic outings, a road trip to Poland to meet co-driver Schramm, a stroll through Austria with Porsche family scion Ernst Piëch, and plenty of Goodwood appearances.

After having done enough race miles to circle Earth three times, the 911 Rally goes up for auction at Bonhams' Collector's Motor Cars and Automobilia event at the Goodwood Revival on Saturday, Sept. 14. The auction house has all of the factory Porsche paperwork, race documentation and correspondence as well as a 100-page illustrated history written by Porsche ex-factory driver Jürgen Barth. The pre-sale estimate is £400,000-£500,000 ($490,000-$620,000 U.S.). Figuring a three-fold drive around the Earth at an even 75,000 miles, that's at least $6.53 per mile. On that basis — only — it could be considered a steal.