Named for the Greek goddess, it has only ire for Harley-Davidson 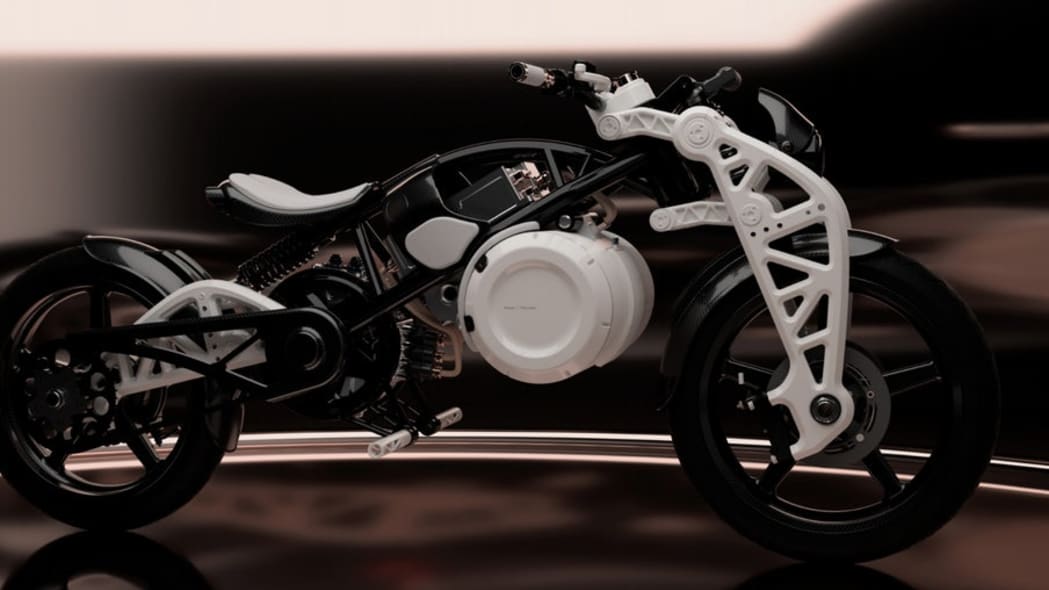 Confederate Motorcycles retired its name and big-bore gas-powered bikes to rebrand as Curtiss Motorcycles and turn its focus to electric two-wheelers. The company's spent the past year or so revealing new designs for future lineups, starting with the Judge-Dredd-approved Zeus concept, followed by a Zeus production concept with its unorthodox battery arrangement, and the cyborg-canine-in-heat Hades. Here we have the third in the range thanks to New Atlas, the Psyche. Named for the Greek god of the soul, the motorcycle is presented by Curtiss' CEO Matt Chambers as a weapon to put Harley-Davidson out of the electric bike business.

First, the details. The Psyche, spare as it is, goes furthest in carving out signature forms we could see defining an EV bike lineup. Of course there's the latest take on the brand's girder fork, seconded in the banana swingarms. Between them, a single gloss black truss holds Psyche's electric organs aloft and visible for autopsy. The cylindrical battery extends laterally like BMW's boxer-engine case, the power electronics ride up high where a tank would usually sit, pegs jut from scaffolding encasing the electric motor, hung at the bike's pivot. The traditional Curtiss seat seems to hang in mid-air, ahead of two red eyes that cover Psyche's six. No one can be a bystander when taking in the design, and Curtiss likely wouldn't have it any other way. But to draw a wider range of admirers, the company's designer did write in response to a commenter, "We are actually working on an additional structural solution that will provide more coverage for a more traditionally beautiful look, giving the rider several options!"

The prospective specs claim a 61-inch wheelbase, an overall height of 37 inches, a whopping 9 inches of ground clearance, and a weight of approximately 375 pounds. A choice of electric motors provides either 48 or 96 horsepower, the battery good for a combined range of roughly 160 miles. The bike Curtiss wants you to compare the Psyche to is the Harley-Davidson LiveWire. While the Psyche takes a step down from the Harley's 105 hp, the Curtiss offering weighs almost 175 pounds less and goes about 70 miles further on a charge. The Harley's priced at $29,799, and the Psyche has just become Curtiss' least expensive model by far, priced at $30,000.

That's where things stand on paper, at least. The Psyche won't be out for at least another two years, whereas the LiveWire can be ordered right now, deliveries scheduled for the next quarter.

And it's possible Chambers will take the fight to Harley-Davidson on paper, in words, for the next two years while he prepares his charge. The former trial lawyer sent New Atlas an e-mail outlining exactly what he thinks of the LiveWire, and that e-mail shot sparks. "I've got something I've always dreamed of: a clean shot at Harley, exposing the hollow seemingly cynical nature of their EV effort, their own CEO referring to their rather commodity looking Livewire example as a catalyst for their petrol line. How uninspiring. He goes on to say he will lead the BE motorcycle field. No! Curtiss is the precise hard knock out punch he didn't see coming. He is way too big and spread way too thin. The volumes will be too low for the next five years. We have out planned them, out designed them, out engineered them, out branded them and out promoted them. The market is very small, ideally suited to our core competencies, skillsets and bandwidth. We have the experience and collaborative relationships to ideally grow with this market. Harley does not."

There's more of the same in a post titled "Rocky II" on Curtiss' WeFunder page, where Chambers aims invective at Harley as if he'd suffered worse treatment by Harley than Erik Buell did.

WeFunder, in case you didn't know, is "Kickstarter for investing," where crowdfunders don't buy a product but invest in early-stage start-ups. Curtiss is there to raise money for its e-bike plans, which include building a bike production and sales operation in Northern California since that's where both the overall motorcycle market and the EV motorcycle market are strong. The goal is to list on NASDAQ by 2021.

Before then, we're expecting the Zeus and the Hades, each costing $75,000, to bow sometime in 2020. Let the EV bike wars commence.