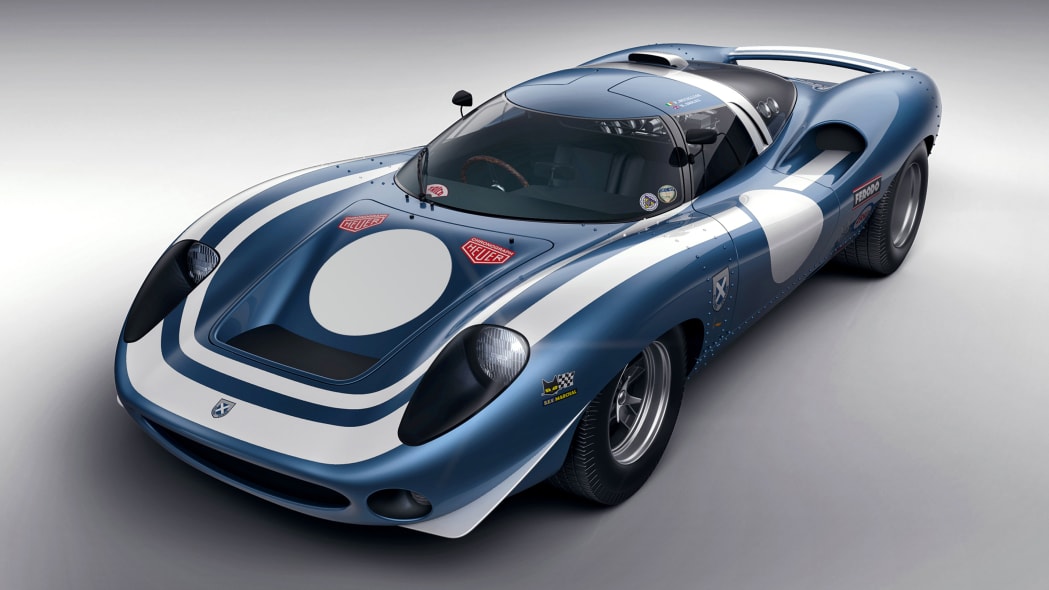 Jaguar race cars won the 24 Hours of Le Mans five times in the 1950s. When the carmaker decided to go back to Le Mans with a factory effort in 1966, it designed the ridiculously slinky XJ13 for the job. A mid-mounted, quad-cam, 5.0-liter V12 powered the open-top racer, making the XJ13 Jaguar's first mid-engined vehicle with the company's first V12. The problem was that by the time the XJ13 was ready to fight, its was already too far behind the competition. The modern-day Scottish race team Ecurie Ecosse decided to answer the question, "What would the XJ13 have become if it had competed at Le Mans in 1969?" The answer the team came up with is the LM69, a bespoke vintage race car.

A bit more history first: The original Ecurie Ecosse team won Le Mans in 1956 and 1957 driving Jaguar D-Types. The team foundered in the 1960s, around the same time Jaguar was shutting down the XJ13 program and putting the race car in storage. Ecurie Ecosse was reborn in the 1980s by Scottish racing driver Hugh McCaig, and fielded a team in the Le Mans Cup last year. Hugh's son Alasdair McCaig now runs the outfit. Working with automotive consultancy Design Q and XJ13 replica company Building the Legend, McCaig and crew asked what would have happened if the original Scots had discovered the XJ13 in mothballs in Jaguar's Browns Lane factory in 1967 — how would they have re-developed the car to compete with the Fords, Ferraris and Porsches in 1969?

Hence, their answer, the LM69, is built to the technical regulations in force in 1969 and limits itself to motorsports technology from early that year. A composite body makes the LM69 lighter than its aluminum-bodied inspiration, although this one has a closed cockpit. A "much-improved," mid-mounted, quad-cam, 5.0-liter V12 built on the basic architecture of the Jaguar unit sits behind the cabin, shifting through a five-speed manual transmission. The motor is fitted with vintage distributors and mechanical injection, but programmable injection will be an option. Buyers will also get the choice of a 7.0-liter V12, which is a bored and stroked version of the 5.0-liter. Either one would fit the period, even though the as-yet-untamed Porsche 917 used a 4.5-liter flat-12 and the winning Ford GT40 MkII ran a 4.9-liter V8.

The V12 in the XJ13 produced 502 horsepower and 386 pound-feet of torque to move a car weighing 2,478 pounds, and could get beyond 170 miles per hour with the right gearing. We haven't been given final specs, but the lighter LM69 should be even more potent. The LM69 adopts a wing and "experimental aerodynamic devices" to help control that power, and wider wheels and tires.

FIA regulations at the time demanded 25 cars be produced for homologation purposes, that being the number of LM69s Ecurie Ecosse will hand-build in their facility in England's West Midlands. The company says they're designed for track use yet are still road legal, however, though that latter concession might only apply in the UK. The price is said to be from $999,000 to $1.45 million, and it would be absurd to buy one in any color other than Flag Blue Metallic. The first one built will be on display at the International Concours of Elegance at Hampton Court Palace, London from September 6-8.