It matches its non-hybrid twin The IIHS has finally evaluated the 2019 Subaru Crosstrek Hybrid, the plug-in version of the subcompact crossover, and it performs just as well as its fully gas-powered twin. Its high marks earned it the organization's highest award of Top Safety Pick +.

In every crash test, the Crosstrek earned the highest "Good" rating for protection, including both driver and passenger small overlap collisions. Forward collision prevention also earned top marks, stopping the vehicle before a crash at speeds up to 25 mph. This is one area where the Hybrid improves on the standard model, not for better results, but for the fact that the forward collision prevention system is standard on all Hybrid variants. It's an option on base and Premium non-hybrid Crosstreks.

The headlights are a similar situation. The Hybrid's standard headlights also received the "Good" rating like top-trim Crosstreks. Where the non-hybrid Crosstreks trip up is that the base and Premium trims have headlights that have the worst "Poor" rating. Parity resumes with LATCH child seat anchor accessibility, which gets a "Good+" rating for having easily reachable anchors and having extras for seating flexibility. 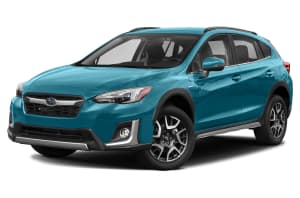