We've only been on the road a few minutes and Bob Kruse is eager for us to try Launch Mode. "Pull over here on the shoulder," says Karma's Chief Technology Officer. We're on a sleepy section of toll road not far from Karma's offices in Irvine, California, and it's a good spot for some shenanigans. I park the 2020 Karma Revero GT and await further instructions.

Using Launch Mode, Kruse says a Revero GT with our test car's lighter, optional 22-inch carbon fiber wheels will hit 60 mph in 4.4 seconds. We engage Sport Mode with the steering wheel's left paddle shifter and floor both pedals at the same time. A countdown of sorts appears on the gauge cluster, giving the engine time to spin up the generator and deliver max power and acceleration at the hit. After a second or two the car is ready.

Off the brake and there's a touch of wheelspin as the 285/35R22 Goodyear Eagle F1s out back fight for traction on the freeway's dusty shoulder. (The fronts are 255/35R22.) They hook up quickly, however, and the pull pushes us back in the seat as the Karma surges down the road with all 550 pound-feet of torque its complex powertrain has to offer. The BMW sourced 1.5-liter three-cylinder engine-generator begins to roar at a steady 6,000 rpm, dumping its exhaust behind each of the sedan's front tires.

There's a stopwatch on the digital gauge cluster timing the run. At 60 mph it stops. 4.9 seconds. The performance isn't in the same league as an all-wheel-drive Tesla Model S in Ludicrous Mode, but there's three of us in the car and the launch was sloppy. Later, off on our own and with a better launch, we record a 4.6 second run. Porsche claims 4.4 seconds for the all-wheel-drive Panamera 4 E-Hybrid, which was Karma's dynamic benchmark for the Revero GT. 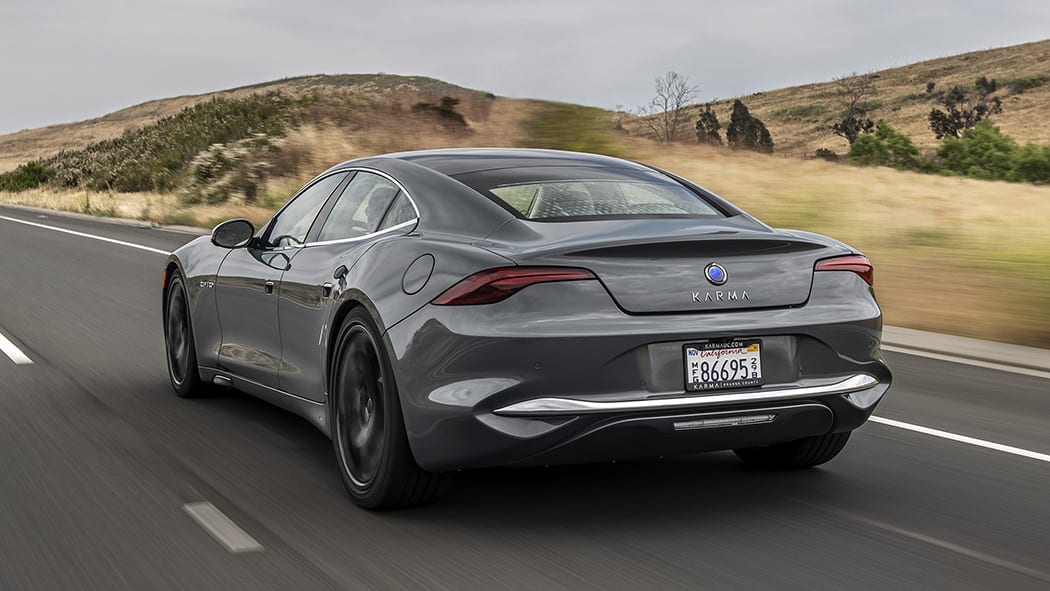 "A couple of years ago we built an all-wheel-drive Revero," says Kruse. "We put motors on each front hub, but we couldn't turn the wheels. For production we would have had to completely redesign the front suspension."

Kruse has been with Karma for nearly three years. Before that he led GM's Performance Division and did the second-generation Cadillac CTS-V. Yes, the good one. He then led the team that created the first Chevy Volt. "It was Bob Lutz's idea, but we had to make it real," he told us earlier that morning.

The original Karma was Henrik Fisker's idea. Wanxiang Group Corporation, one of China's largest auto suppliers, bought the remains of Fisker Automotive back in 2014. It renamed the company Karma Automotive and its radically styled plug-in hybrid sedan the Karma Revero. It's been working to improve the machine ever since.

All of the Karma's body panels have also been replaced, including its doors. Surprisingly, steel is used throughout, even for its hood and decklid. Its design roots are still recognizable from the Fisker days, but the new look is far more modern and the proportions have been cleaned up. Fisker's "mustache" grille is gone and the new hood is longer and extends to the leading edge of the car. There's more shape in the sides and the C-pillars have been extended into the decklid, which visually accentuates the sedan's fastback silhouette, broadening its shoulders. 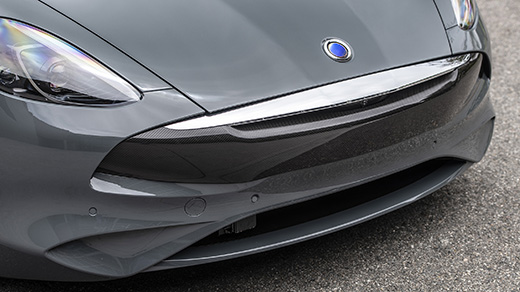 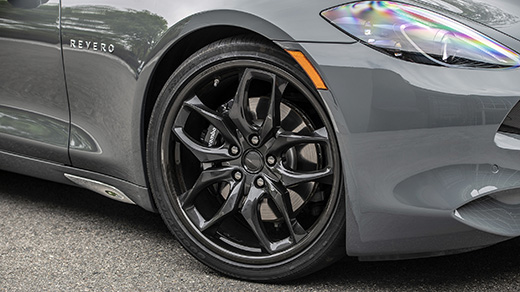 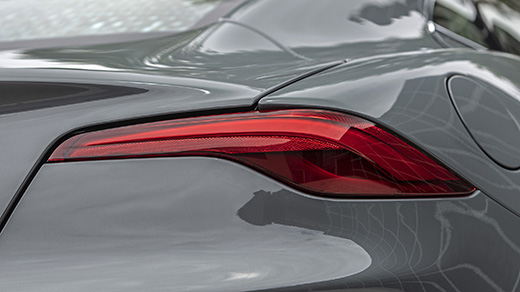 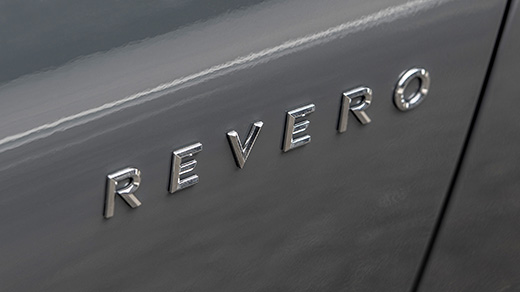 Overall they've carved about 400 pounds from the car, which now weighs about 5,050 pounds, or about 300 pounds more than the similarly sized Panamera. The optional carbon fiber wheels, with aluminum centers, save 55 pounds over the stock 21-inch forged wheels, and are worth a tenths of a second to 60 mph, says Kruse.

Inside nearly everything the driver sees or touches is new, including the seats, center console and infotainment system. There's a small dose of real wood and most everything is covered in soft leather, while the headliner and visors wear Alcantara. The chrome visor hardware is a nice touch. The Revero's thick, leather-wrapped steering wheel is new but unfinished in this early production car. The airbag cover and spokes of the production unit will wear a mix of black trim and matching wood. Some bits are borrowed, such as the steering column and stalks from a Corvette. But the push button shifter and the new infotainment system are bespoke. The latter has a large touchscreen, Apple CarPlay and 3D sensitive steering wheel controls with haptic feedback. The Karma's air conditioning is ice cold.

You sit low in the Revero GT, in seats as comfortable and supportive as anything Porsche is doing, and look out over its curvaceous fenders and long hood. In front of you is a gauge cluster that's an evolution of the old setup, and although the digital cluster is a bit busy ,the speedometer is in the center where it should be. The instrumentation alongside can be chosen from dozens of options including yaw rate, torque and a simple analog-style tachometer. The interface with the steering wheel controls still needs a little work, but the touchscreen's menus are intuitive.

Two steering-wheel-mounted paddles allow you to dial in the powertrain. The left is used to choose between Stealth, Sustain and Sport modes, while the right offers three levels of regenerative braking. Throttle mapping is perfect across the board, and the response is quickened in Sport mode, which also adds a bit of weight to the steering. 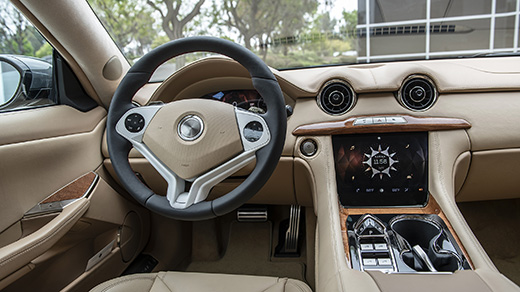 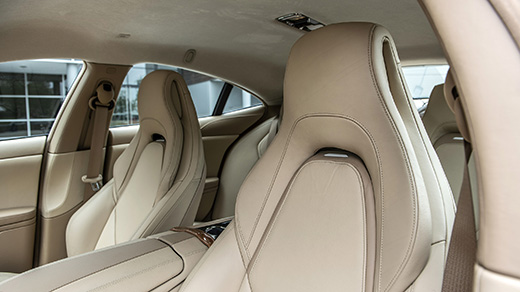 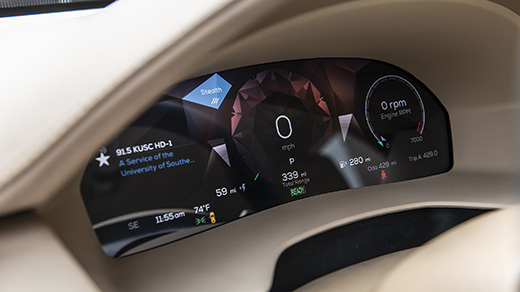 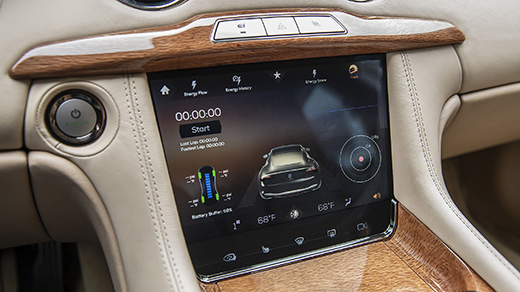 Fit and finish aren't up to Porsche Panamera standards, but they're light years ahead of the company's previous products, and they're in the same neighborhood as a Corvette or an Aston Martin Rapide. Like the Aston, the Revero GT seats four and the rear seat is tight.

Internally the Revero GT is referred to as 2.0. Although it's based on the Karma Revero, which was based on the Fisker Karma (1.0), Kruse and his team of engineers spent two years reengineering much of the car, replacing its entire front structure and most of its powertrain. New components include two electric motors, which can vector power from side to side, the three-cylinder engine from a BMW i8, and a lighter, 28-kWh nickel-manganese-cobalt lithium-ion battery pack with considerably more energy density. Total output has jumped from 403 horsepower to 536 horsepower, and its EV range is up to 80 miles. Perhaps more importantly, the sedan's refinement, and ride and handling dynamics, are significantly improved.

As before the battery pack runs down the spine of the car, so the center of gravity is low, but it takes up quite a bit of interior space. The two electric motors are mounted in the back and power the rear axle through a single speed gearbox putting 53 percent of the cars weight over its rear tires. In a few tight corners there's impressive grip and the four-wheel independent suspension stays flat.

On the smooth two-lanes of California's Orange County, the Revero's chassis feels tight and the car has a dense and solid feeling on the road. There are no squeaks or rattles, and the controls have a satisfying refinement we didn't expect. You can feel the surface of the asphalt in the steering and through the seat, but not crudely. Even large impacts into the Revero's huge front tires don't send a shudder through its structure. 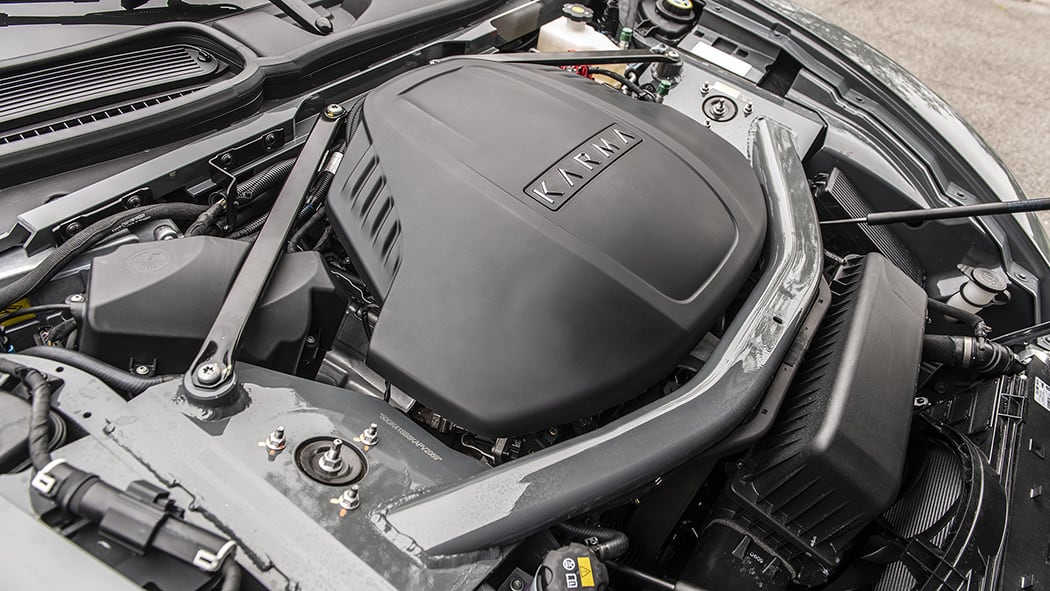 Considering its minuscule tire sidewalls and scant 3.5 inches of rear suspension travel, the Karma's chassis tuning is a revelation. New shocks from Sachs provide a very smooth ride and impressive body control. The Revero never bottoms out on its stops, even over highway expansion joints. Over one particular section of unusually rippled road, the rear suspension is slightly underdamped and could settle down a bit quicker, but it doesn't compromise stability. Its brakes, which are supplied by Brembo, are powerful and easy to modulate, if a bit numb at the pedal.

In Stealth mode it's an EV. Sustain mode includes the three-cylinder at 25 mph, but the engine's operation is so smooth you can't hear it or feel it turn on or off. Without the tachometer you'd never know when it's running. This is in stark contrast to the Fisker Karma, which used a rather rough four-cylinder from GM that turned itself on as soon as the car started moving. "It sounded like a tractor," says Kruse.

In the Revero GT, the engine's speed is never controlled by the throttle and it never powers the car's wheels directly. It's usually running at just 1,500-1,800 rpm, turning the generator which powers up the batteries. In Sustain mode the Karma has a total range of 360 miles (280 miles on gasoline) and EPA ratings of 70 MPGe and 23 combined MPG. 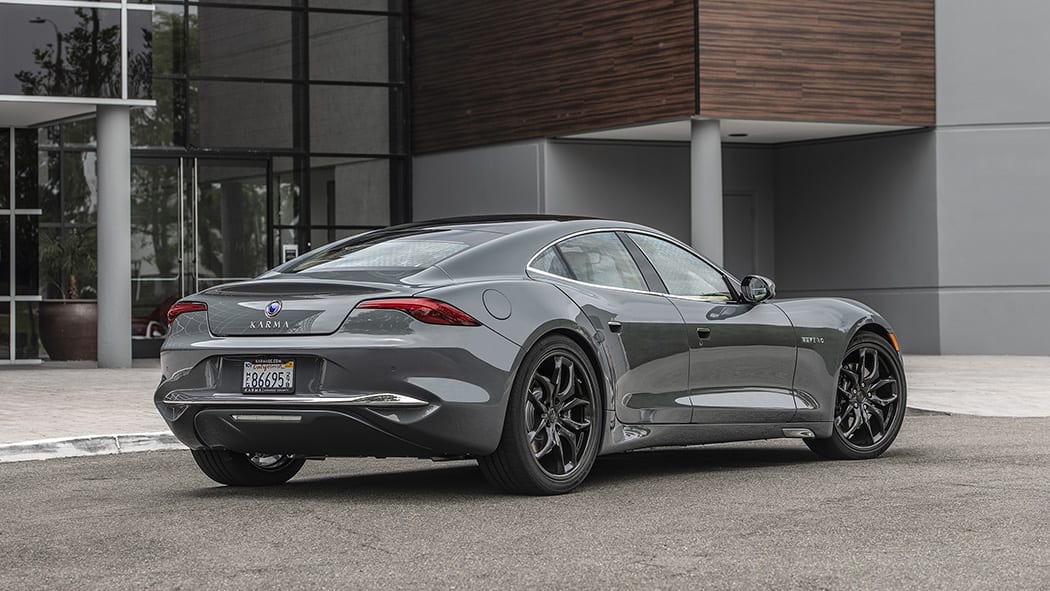 Floor the throttle in Sport mode and the powertrain responds like it does in Launch mode. There's an impressive surge of power and a guttural moan from the BMW three-cylinder as it cranks itself up to 6,000 rpm. At 100 mph the Revero GT feels locked in and its interior is impressively quiet. Top speed is 125 mph because the electric motors just can't turn any faster. At that point they're spinning at 12,300 rpm, and they max out at 13,000.

If we owned the car, we would probably drive it around in Sustain mode most of the time, with its brakes set in Regen 2. It's a pleasant compromise with a high level of refinement, an ease of driving and spirited performance. And we wouldn't hesitate to drive the Revero GT from L.A. to Vegas, but there would be a gas stop along the way.

Earlier this year, the Revero GT was unveiled at the Shanghai Auto Show alongside two sexy futuristic concepts. It'll be built at Karma Automotive's new assembly plant in Riverside, California and the company hopes to sell 500 a year at about $135,000 each. The car proves Karma can build a dynamically desirable machine, but it's really just a stopgap until the company's full EV future is realized. The plan is to introduce a BEV sedan by 2021 with an all-new chassis and a Tesla-like flat battery pack. Internally they call it 3.0.