It joins the game with Tesla, Audi, Jaguar

The days when Tesla occupied the premium electric segment all on its own are well and truly over: Jaguar has the I-Pace, Audi the E-Tron, and now Mercedes-Benz is launching the EQC, a premium battery-electric SUV. The car was presented in Norway, an oil-rich country that can afford generous subsidies for electric cars. Think of it as secular atonement.

In Europe, the EQC is priced significantly below the Jaguar and the Audi, but still within the general price bracket — roughly $70,000 to $90,000, depending on options. That said, the name — EQC 400 — suggests that a lower-power, entry-level version may come later.

In this company, the EQC has nothing to hide. The first impression is favorable: It rather successfully conceals the fact that it is based on the GLC. The front air intakes and the continuous light bands up front and in the rear look futuristic, the flanks are extremely smooth, the roofline is "faster" and lower than the GLC's. The proportions remain conventional, like the Audi and Tesla, but the overall look is unique. Its futuristic, ultra-clean lines look very different from the aggressively, chiseled Audi E-Tron. There is even an AMG package, which is purely cosmetic. We like it a lot: It cleans up the front end further, and it adds structure to the rear end. Plus, you can get it with 21-inch wheels; in the standard trim, you get 19- or 20-inch wheels. 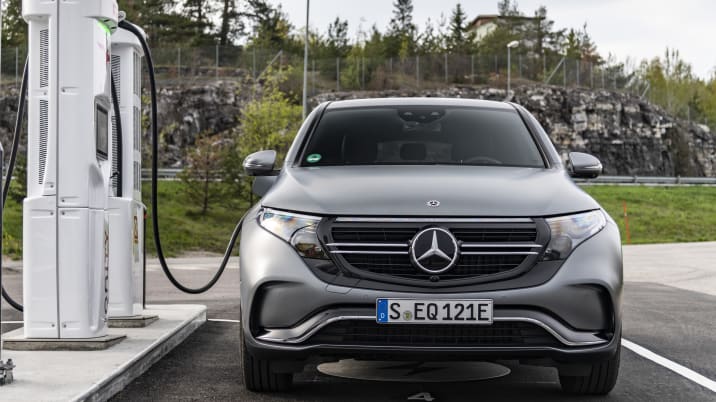 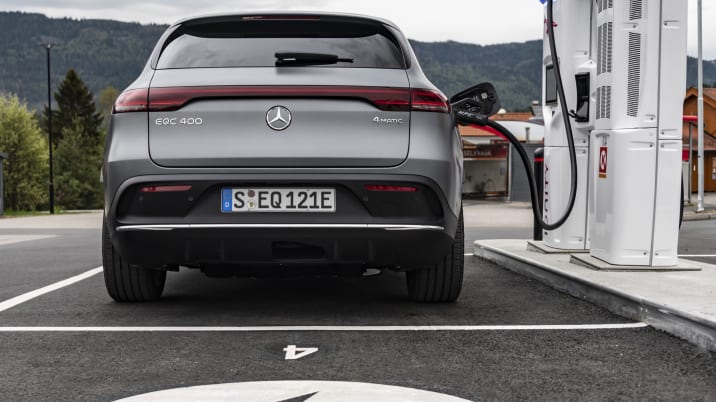 The interior is rather modern as well. Although the EQC engineers have generously helped themselves from the corporate parts bin, the combination of GLC center console and doors with the modern MBUX user interface works quite well. The futuristic fabrics and colors are exclusive to the EQC. For an interesting detail, the side windows are relatively low, but from the inside, their lower part is blocked off by the door panels. We suppose that today, customers prefer a protected cabin to an airy one.

The two asynchronous motors, one up front and one abaft, make a combined 402 horsepower and 561 pound-feet of torque. The front motor is designed for superior efficiency at low- and midlevel loads, while the rear motor provides elevated performance. Thus powered, the hefty EQC reached 62 mph in a mere 5.1 seconds, 0.6 seconds quicker than the Audi E-Tron. On the other hand, it tops out at 112 mph, lower than the Audi's 125 mph.

But going into triple-digits isn't much fun in these electrics anyway as the acceleration curve flattens beyond 90 mph or so. What's fun is charging ahead from a stoplight, and the EQC manages to do so with virtually no wheelspin. That's testament to the ultra-quick and precise torque management system, which we expect to save the owner considerable investment in rubber. The other advantage is the instantaneous acceleration at highway speeds. Passing is lightning-quick — this is where electrics are fun.

Cornering is another topic, however. There is just no hiding that at almost two and a half tons, this is a heavy vehicle, and while the larger wheel/tire combinations improve turn-in, there is still too much body roll for such a relatively compact crossover. And with a ground clearance of 5.1 inches, the EQC isn't great off the road. Towing capacity, for Europe, is lower than the GLC models, even the entry-level ones.

It's better to take it easy and enjoy the comfy ride. And the superior sound isolation, which beats both Tesla's and Audi's. Choosing a leisurely pace is also beneficial to the range, rated somewhere between 230 and 260 miles on the European cycle. We'll have to wait for official EPA numbers for U.S.-spec models. 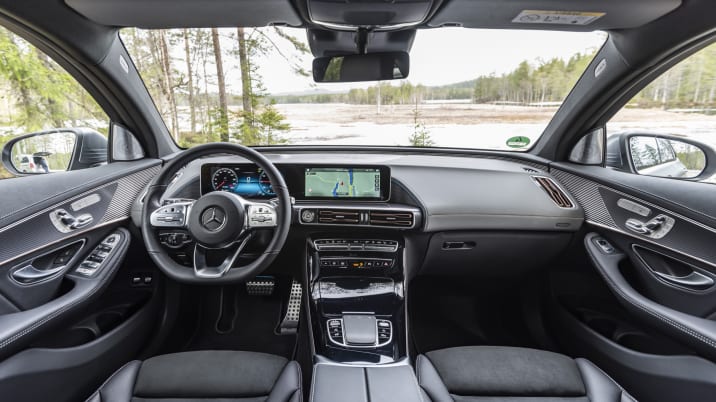 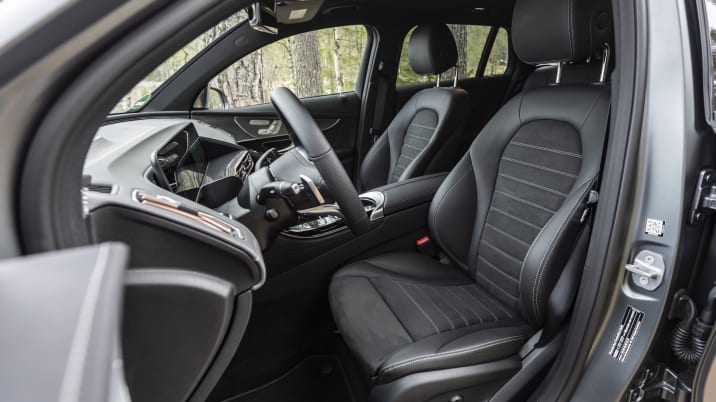 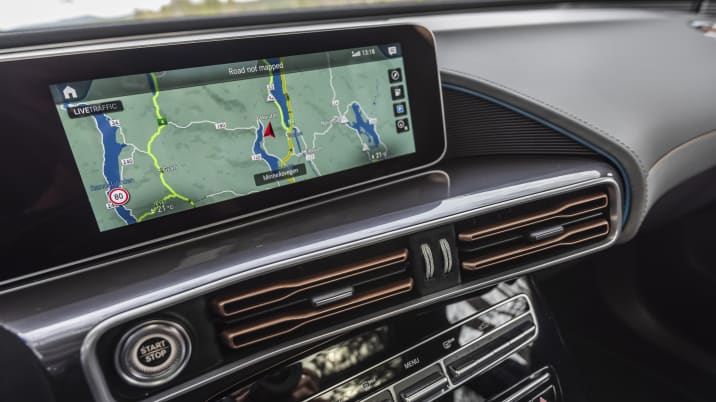 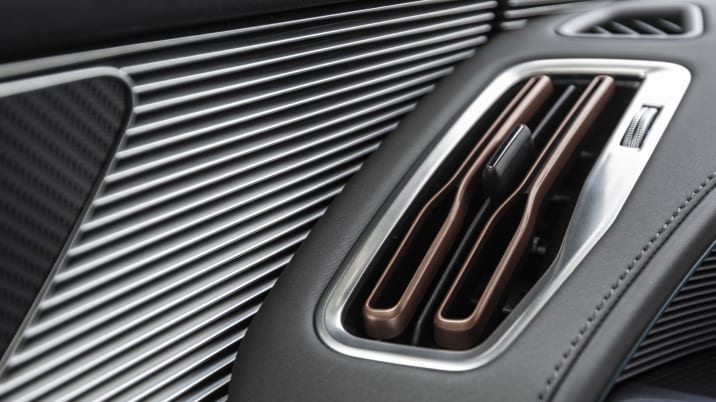 Regenerative braking can be set in four stages using paddles on the steering wheel. Drivers can let the car coast almost endlessly or pre-select a relatively fierce deceleration mode that allows for almost pure one-pedal driving. In between, there are two more levels. And there is an automatic mode that adjusts brake regen precisely to the topography ahead based on the EQC's navigation. It works remarkably well, but we prefer when we can predict how the EQC will behave.

We liked the electronics and infotainment: As mentioned, the EQC comes with the MBUX user interface, complete with two wide screens similar to other Mercedes-Benz models. Voice controls, the touch-sensitive center screen and the steering wheel buttons all work well. The gesture control system, by contrast, is dispensable, and the same goes for the good-looking but confused touch pad on the center console. We sure wish Daimler would have kept the precise and well-proven push-and-turn knob. But alas, the touch pad is coming to more Mercedes products in the near future.

Minor nitpicking: It's a shame that the instrumentation isn't as varied as models like the G-Class. And a frameless rearview mirror would be appropriate in an SUV of this price.

The functionality of the infotainment system, by the way, varies by market. Depending on the region, it can go as far as providing a countdown to when that traffic light ahead of you will turn green using V2X technology.

Trunk volume, rated at 17.6 cubic ft, is competitive with conventionally powered SUVs. There is no front trunk; we are told that such a space would have been relatively tiny, and while it could have held the charging cords, Daimler preferred to have them located in the hatch near the charging ports at the EQC's rear.

As with every electric vehicle, buyers of a Mercedes-Benz EQC needs to realize what they are getting into with regards to range and charging time. It will take some adjustment if you're moving from a traditional internal-combustion car to an EV. The technology race is open and new competition is cropping up all the time. The EQC is a strong EV with a quiet, comfortable ride and all the benefits of Mercedes ownership.