Having underwhelmed in Australia, can it prove itself worthy of the Raptor name? ESSAOUIRA, Morocco — It took a decade, but finally America is letting the rest of the world taste the Raptor magic. In terms of heritage, style and capability, the F-150 Raptor still rules supreme. The rest of the world wanted a piece and, finally, Ford is spreading the love.

Enter the Ranger Raptor, created by Ford Australia and packaged for the world. But is it a Raptor in name only, or the real deal? Our first drive in Australia revealed an underwhelming four-cylinder diesel engine and fears that Ford Performance may have sold customers short.

Second chance for the Ranger Raptor to prove itself comes on Morocco's Atlantic coast. And we're promised this will be a real opportunity to see if the Baja spirit endures, remixed for a global audience.

But not before confronting Chief Program Engineer Damien Ross about that engine. As the Ranger Raptor progressed from long-held dream to reality, he boasts of trips to America to sample F-150s at Ocotillo Wells and meetings with U.S. colleagues to concoct the ingredients list for creating a true Raptor. You can hazard "a four-cylinder diesel will be enough" wasn't on that list. 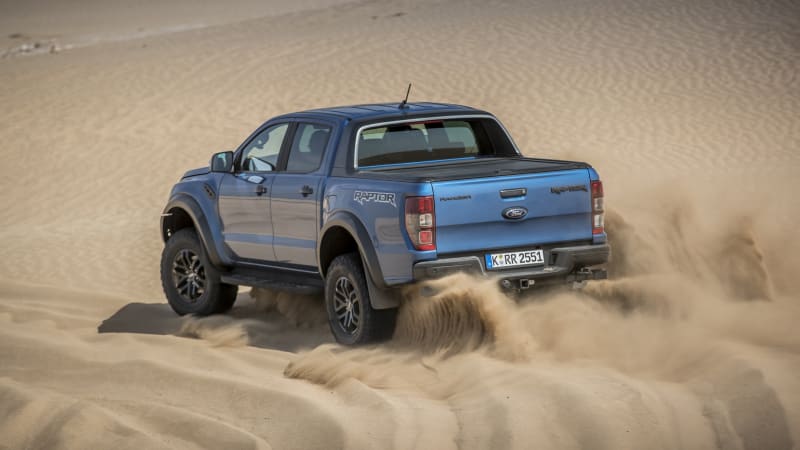 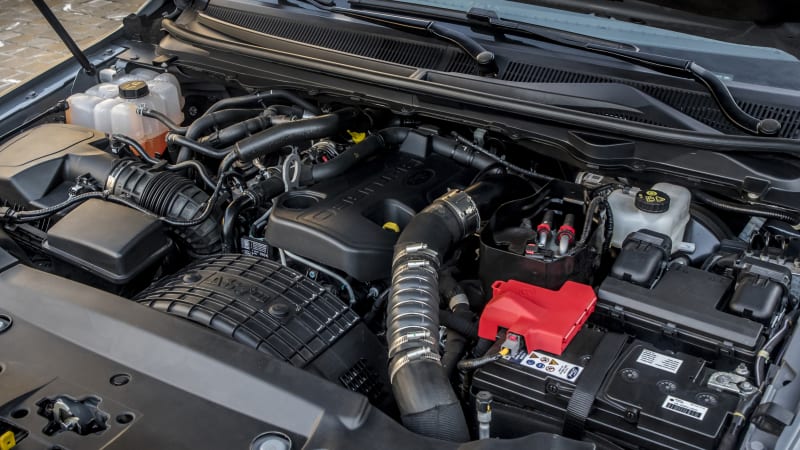 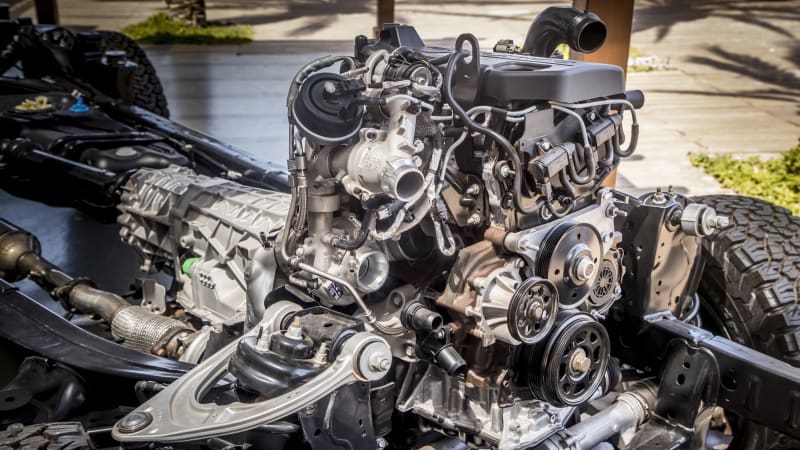 Yet that's what it's got, the sophisticated sequential turbo 2.0-liter EcoBlue punching above its weight with 210 horsepower and 368 lb-ft of torque. It's the latter figure Ross insists ruled out a gasoline motor, despite the existence of a 270 horsepower, 310 lb-ft, 2.3-liter EcoBoost option in the American market Ranger. With 310 horsepower in the EcoBoost Mustang and, in evolved form, tuned to an officially-sanctioned 375 horsepower in the Mountune Ford Focus RS, there's clearly headroom in that engine. Surely a Ford Performance product needs a powerplant worthy of the name, and wouldn't Raptor buyers trade a little payload or towing capacity for some fireworks under the hood? Ross offers an apologetic shrug and "we're listening" to a question he's probably been asked once or twice already.

Keen to talk positives, he cites the switch to coil springs and a Watt's linkage on the rear axle as "a big engineering decision" with significant cost implications. "Our dynamics team said we had to have it," says Ross, "and it's what makes the Ranger Raptor special and gives it genuinely different characteristics to the F-150. I consider that car has a raw character, but ours is a little more sophisticated and therefore better suited to the roads in markets we'll be selling in."

It's all relative, of course. We're still talking a ladder-framed truck with fat tires and Fox suspension. Designer Dave Dewitt shows clear delight at how it's turned out, even when being tossed around in the back seats on a rock crawl to a coffee stop in the dunes. "Opportunities like this really are once in a lifetime," he grins. "We'd been sketching Raptor versions of the Ranger for a long time, and then we got the green light. Engineering came to us and said, 'We can give you 5.9 inches of extra track — how much do you need?' and we said, 'All of it!'" 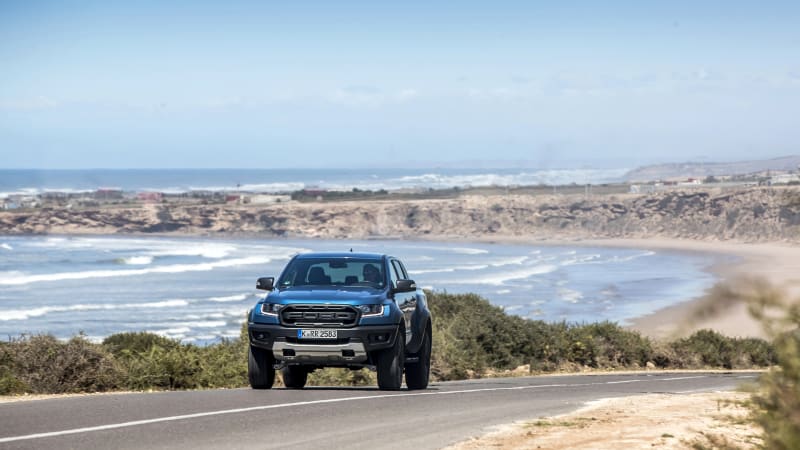 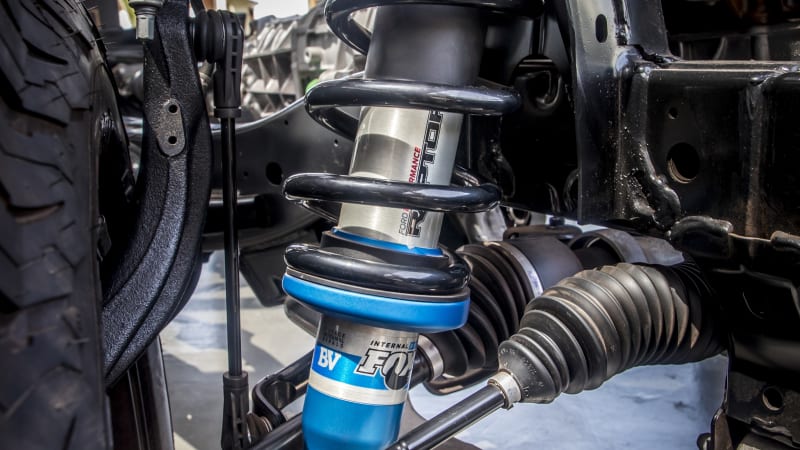 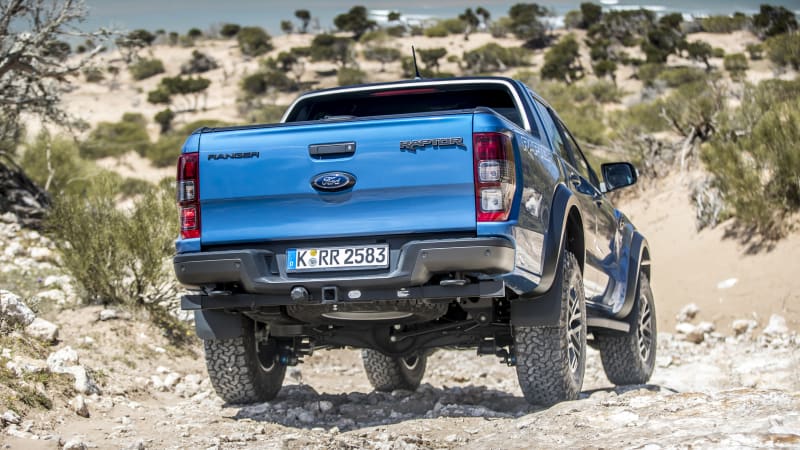 It's still 6.5 inches narrower than its big brother, looking lean but no less mean when parked alongside for direct comparison. Fit, materials and finish are also considerably more premium than the F-150, the Ranger aiming to win new customers from regular SUVs and crossovers with quality and user friendliness to match the attitude.

The route has certainly thrown its challenges at the Ranger Raptor already. Moroccan roads are a mix of surfaces, often requiring swerves into the rocks and dust that border them to avoid meandering trucks, battered Mercedes taxis and various four-legged road users. Kicking up a roostertail of stones and dust as you do so is obviously fun but also reveals the duality in those trick Fox shocks.

With inside wheels in the dirt, the ones still on the tarmac are held securely in their shocks' mid-stroke by the Position Sensitive Damping that so successfully avoids pitch and wallow on the road. But at the same time, the curbside wheels are swallowing up all manner of rocky mayhem as the bypass valves unleash the full bump-gobbling travel. That the Ranger Raptor floats serenely even on split surfaces of such extremes is testament to the quality of the damping, the dust trail in your wake the only clue you're still half in the dirt. Ford needs to prove the baby Raptor is about more than fender flares and Fox shocks, though. A Baja-inspired test loop in the dunes gives it opportunity to slip the leash.

Chassis modifications include reinforcement to the front chassis rail sections, thicker skid plates, and a raised tow bar to improve clearance. You're glad of all this the first time the Ranger Raptor heaves on its dampers and then belly flops hard down onto the sand, our test loop including rock gardens, tire-swallowing washboard ruts and axle-deep sand among its challenges. Like the F-150, there's a Baja mode you can run in two- or four-wheel drive, the dedicated traction control in this setting letting you spin up the wheels to steer on the throttle. Baja mode it is, then. 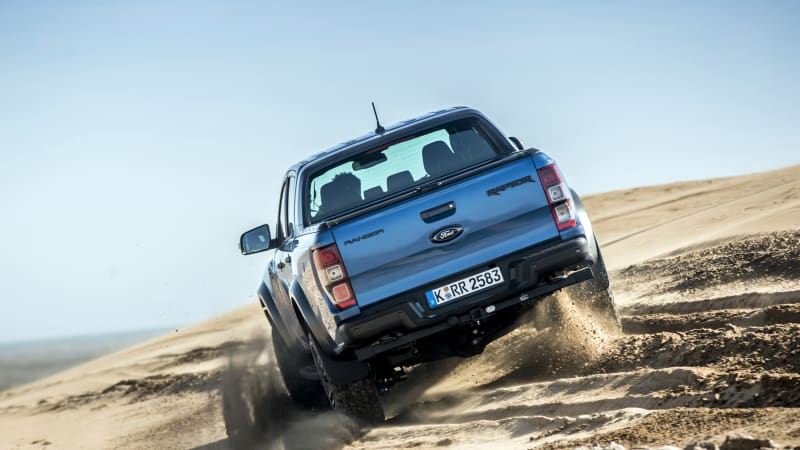 The 33-inch BFGoodrich tires claw at the sand as the ruts left by preceding trucks threaten to suck us in. But where the F-150 would be squatting under its 510 horsepower and planing like a speedboat, the Ranger falters, the lack of grunt and the narrow diesel powerband really telling. Shifting gears via the paddles changes the tone but doesn't make much difference in forward progress. And it's only when the surface firms up and the Raptor can haul its chassis rails out of the sand that it springs forward with a taste of the agility you feel on the road. Credit to Ford, though: At least half the route thus far has been off-road and demonstrates some considerable faith in the product's ability to soak up a real beating, even proving itself capable of hauling itself out of a beaching with low-range and diff lock to avoid the indignity of a tow from the attendant F-150.

Hands up, the Ranger Raptor exceeds expectations in a test of this nature. Those fearing Ford would palm the rest of the world off with a trim level can stand easy. This truck is a more powerful engine away from a slam dunk, but the Ford Performance team has successfully remixed an all-American dish for global consumption with some style. Spice it up just a tad more, and it'll truly be a taste of Raptor insanity the whole world can enjoy.