2019 Ford Ranger Raptor First Drive | Hold on to your butts

Christopher McGraw
Editors' Pick
View All Specs
1 Review
CRACKENBACK, Australia – This isn't the story I wanted to write. I was sitting on the shores of Lake Jindabyne in the Snowy Mountain region of Southeast Australia, having just finished the first of what would be many off-road runs in a 2019 Ford Ranger Raptor, one of the most anticipated vehicles in the world. This is about as close to an automotive dream come true as I've had, but this story isn't about a truck that is heading to our shores. Rather, it's about a truck that isn't.

I had an inkling before making the trip down under, but now I was certain: This is the truck Ford should've led with. This is the truck that America needs right now. And it's the one that Ford confirmed we won't get anytime soon.

Last year I drove a Ranger down in New Zealand – a Wildtrak model with a 3.2-liter diesel. It was a great truck to drive, but didn't have the legit off-road capabilities I was hoping for. Like the Chevy Colorado ZR2 I drove at our Tech of the Year awards, or the Toyota Tacoma TRD Pro I drove all around the Pacific Northwest. Those trucks showed me what the Ranger could be. And the Ford F-150 Raptor has proven over and over that Ford knows how to do an off-road truck right. Why couldn't the Ranger become the mid-sized, off-road truck of my dreams?

And then it seemed like my dreams had been answered. Ford announced it was developing a Ranger Raptor. The fast, capable little brother to the F-150 Raptor that could go places the larger truck couldn't, looking completely badass while doing so. Finding out that it would not be coming to America was disappointing, but instead of sulking, I flew down to Australia to drive the truck we wouldn't be getting. 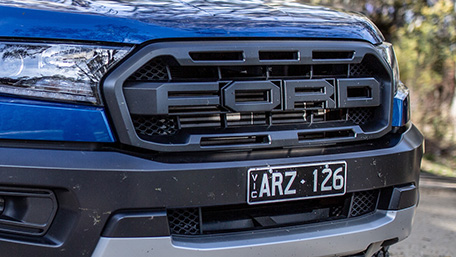 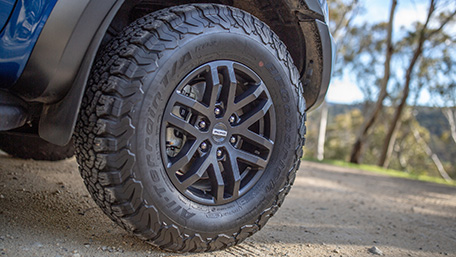 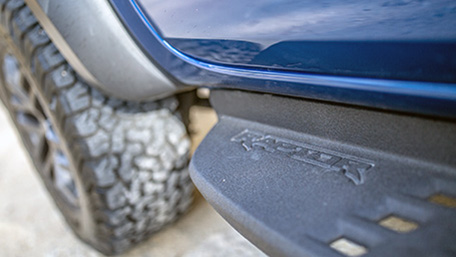 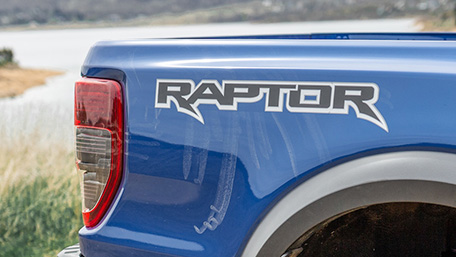 My first experience behind the wheel was a couple of hours into our five-hour drive from Canberra to Crackenback. It's a lonely stretch of road, but it let the Ranger Raptor attempt its first test: passing a slow-moving semi on an otherwise straight and open road. I turned on my blinker, pushed the accelerator to the floor and... nothing. Well, not nothing, but it felt that way for five agonizing seconds, until we had gained enough speed to pass the semi in front of us.

The 2.0 liter four-cylinder twin-turbo diesel, which puts out only 210 horsepower but an impressive 369 pound-feet of torque, feels good at lower speeds but lethargic on the highway, especially in the Normal driving mode. Switch the driving mode from Normal to Sport however, and some of that changes. The ten-speed automatic transmission, shared with the F-150 Raptor, holds onto gears and aggressively downshifts, giving the illusion of more power. Illusion or not, it works. It helps tighten up the steering, too, which feels floaty and disconnected in Normal. Sport makes the steering feel tighter and more accurate.

We eventually left the flat roads of the plains behind, winding up Kosciuszko National Park, home to Australia's highest mountain range. Another test for the Ranger Raptor, and this time it fared better. The 10-speed automatic felt right at home on the narrow switchback roads. It was here that the brakes got their first real test as well, thanks to the kangaroos haphazardly hopping about roadside.

The switchbacks revealed a significant downside. Most owners of this truck will never have to deal with pulling u-turns on a narrow one-lane mountain road in order to get the perfect passing shot, but today, that's what my producer demanded. The Ranger's turning radius, coupled with the shoulderless pavement, turned what would normally be a quick about-face into a three, sometimes five-point turn, a limitation I could see being problematic in a tight-trail off-roading situation. 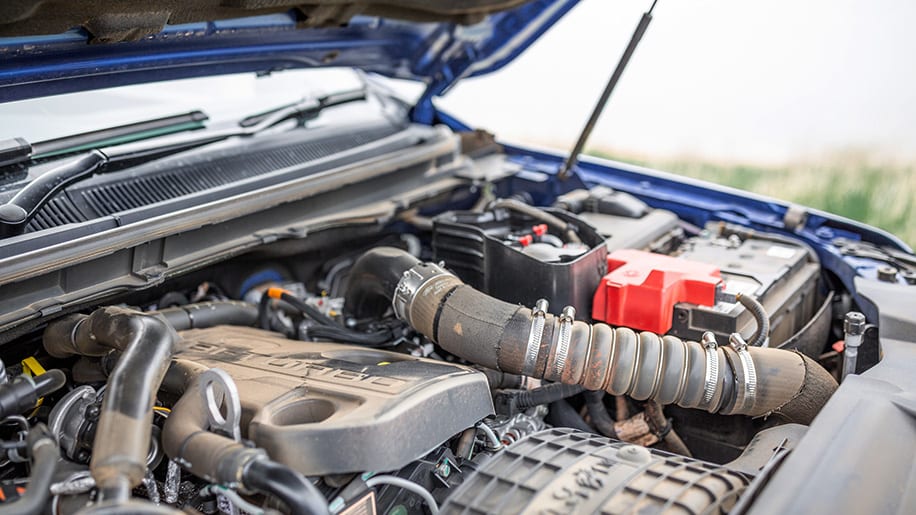 Even in Sport Mode, the ride was incredibly comfortable, thanks in part to the Fox Racing shocks and their internal bypass technology, which allows the hydraulic fluid in the shocks to bypass the piston when driving on smooth terrain. The interior, similar to the standard Ranger with some Raptor badging added, was pleasant. The seats were supportive but not too stiff, and the road noise from the BF Goodrich KO2s was less than expected. The Sync 3 infotainment system was displayed on a crisp 8-inch touchscreen, and was complete with Apple CarPlay, which we used extensively.

Completely unique to the Ranger Raptor is the leather wrapped Ford Performance steering wheel which feels solid in hand. The magnesium paddle shifters, while fairly close to both the turn signal and windshield wiper controls, are solid and easy to use. Completing the ensemble is a red leather 12 o'clock indicator strip, allowing the driver to quickly see which way the wheels are pointed.

The next morning came early, as jet-lag had both myself and my producer awake long before dawn. On our way back from our mountain driving the day before we had spotted a lakeside off-roading area that looked promising, and by the time the sun had first peeked over the surrounding hills we had driven past the kangaroos, emus, and wombats, and were already kicking up dirt.

Off-road is where this truck belongs, among the boulders and mud. The KO2s, which on-road were noisy and underutilized, stand out off-road by gripping every type of surface thrown at them. The 11.1-inch ground clearance nearly matches the 11.5-inch clearance of the F-150 Raptor, while the 32.5 degree approach and 24 degree departure and breakover angles are all more impressive than those of its big brother. 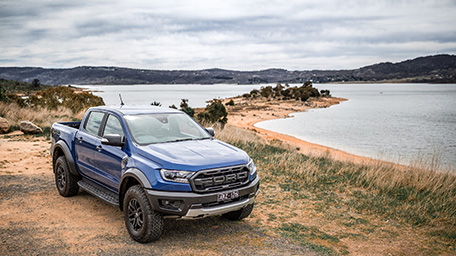 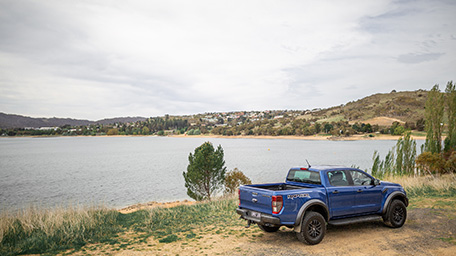 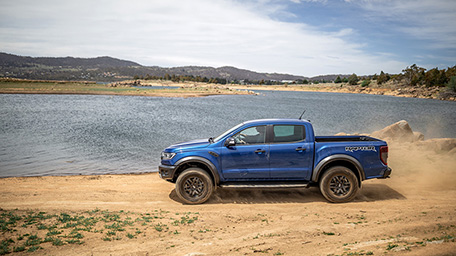 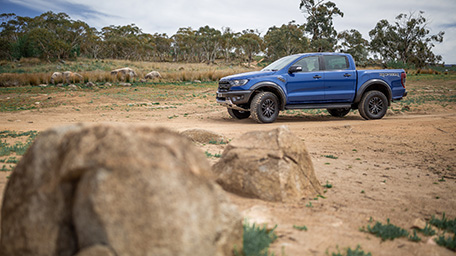 The shocks that made the on-road driving comfortable are the real treat here. Ford went through over 100 prototypes between the front and rear to arrive at the production 46.6mm pistons developed by Fox Racing Shox, and it shows. They allow for 30-percent more travel than the standard Ranger, which means that even with a cab full of camera gear, the ride is less bumpy, allowing for a quicker, more spirited off-road experience.

The Ranger Raptor features four off-road modes, Grass/Gravel/Snow for slippery conditions; Mud/Sand for extra traction on soft surfaces; Rock for slow rock crawling; and Baja mode, which reduces traction control for high-speed, off-road, Baja-style driving. Each of these, with the exception of Rock, requires the truck to be in high-range, while Rock requires low-range.

While the lakeside of Jindabyne offered plenty of rock-crawling and trail-riding, no test of anything named Raptor would be complete without playing around in the sand, so a few days later we found ourselves on the shores of the Southern Pacific. Stockton Beach, a two-hour drive north of Sydney, is home to the southern hemisphere's largest moving sand dunes, and up until a few years ago, you could drive on any part you wanted. Some large storms in the earlier part of the decade put an end to that, so instead we were driving along the shore from Williamtown to Anna Bay, roughly a 10-mile trip. The truck handled the drive with ease, even when the ground softened and the tires were at a higher than ideal pressure for beach driving.

From the sand of Stockton Beach we transitioned to the asphalt of the city. On the narrow streets of Sydney the truck feels huge – and it is, nearly six inches wider than the standard Ranger – but in the States it would feel right at home amongst its larger, full-size siblings. And while the 369 lb-ft of torque is fantastic, the 210 horsepower the diesel puts out is not enough for an American market that loves all things horsepower and is used to the gas-powered Raptor F-150 – not by a longshot. 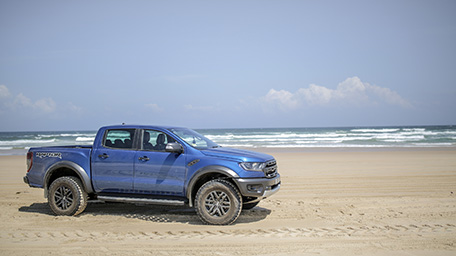 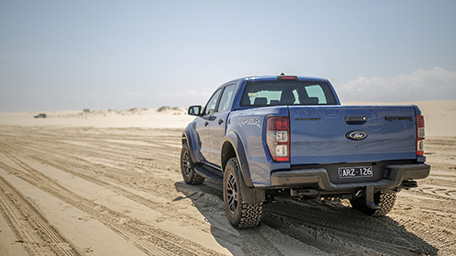 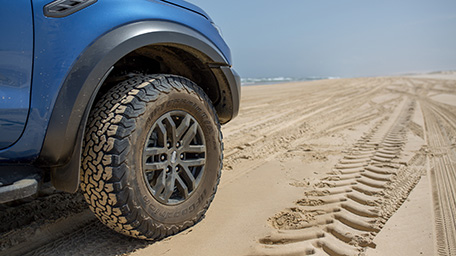 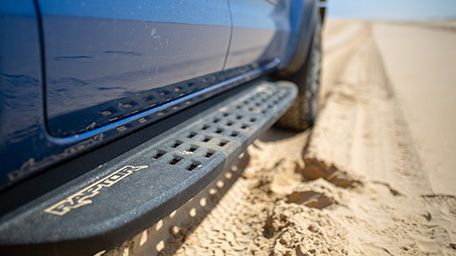 In Australia there isn't much in terms of competition, but if brought to our shores that story quickly changes. I for one, would love to test the Fox Shox back to back with the ZR2's sophisticated Multimatic Dynamic Suspensions Spool Valve (DSSV) dampers. And while the Ford diesel bests the diesel ZR2's specs on paper, with the exception of curb weight, its 210 horsepower is unsurprisingly eclipsed by the gas-powered ZR2's and Toyota Tacoma TRD Pro's 308 and 278 horsepower, respectively. Those gas engines don't come close to the Ranger Raptor's 369 lb-ft of torque, which of course is more useful off-roading.

Though subjective, the Ford also takes the trophy in exterior looks in my opinion. The Ranger Raptor is every bit as aggressive and menacing as its bigger sibling, but with better proportions. The Lightning Blue looks incredible, though after seeing it in person, Conquer Gray is by far my favorite.


All is not lost, however. After all we do live in the land of the F-150 Raptor, an incredible beast in its own right. And if mid-size trucks are more your thing, you have plenty of options to choose from between the Toyota Tacoma TRD Pro, the Chevy Colorado ZR2 and ZR2 Bison, and the newly unveiled Jeep Gladiator. It's a good time to be a mid-size pickup enthusiast, unless you happen to also be a Ford loyalist.

That being said, if you are a Ford-loyalist, the aftermarket will be your best friend if replicating the Ranger Raptor is your goal. The U.S. version, with its 2.3L EcoBoost putting out 270 horsepower and 310 lb-ft of torque, can be transformed quite easily with a slew of parts that'll be ready to bolt on when the truck hits dealers. There is something to be said for customizing a truck to exactly fit your needs as well, and with a more nimble starting point, the standard Ranger will have an easier time fitting down tighter off-road trails.

All of this is not to say that the Ranger Raptor will never grace us with its presence here in the States. Ford has said the 2019 version won't be coming, but I still am holding onto the flicker of hope that it'll be here in a few years. Then I'll be able to write the story I wanted to write – one with the Ranger Raptor taking on the Gladiator, Tacoma, and ZR2 head to head.

Until then, we'll always have Sydney.