Hillclimb cars are traditionally stupendously winged beasts, but this one takes the cake for the wildest wings we've seen in awhile. Franco Scribante Racing put this Nissan GT-R hillclimb car together, and the team plans to bring it to South Africa's Simola Hillclimb next month.

As we sit mouth agape at the photos of this car, the most defining feature is definitely the front wing. It's relatively normal to see some rather outlandish splitter setups, but this thing has one of those plus a massive wing stacked right on top of it. This big ol' wing wouldn't look out of place on the back of a GT-R, but it sure is weird seeing it in front. There's always a delicate balance in racing between downforce and drag, and these guys must be right on the edge of some kind of an advantage.

The stupid amount of power they're making will at least partly make up for the wretched frontal area of the car now. They claim the heavily modified GT-R engine will be putting down about 1,600 horsepower to the wheels. It's not made clear what the team has done to the 3.8-liter twin-turbo V6 to get that power, but we can assume a lot more boost is involved. After seeing the front, the GT-R's massive rear wing and tall diffuser aren't particularly surprising. There isn't a downforce figure quoted, but we'd love to hear one.

Dodson Motorsport was a partner for the build, and they've had to move fast. Franco Scribante Racing said the car arrived late, and that they've been pulling 18-hour days to get it prepped for its first hillclimb event with Dodson. There's no word on where they're going to take it after the South African hillclimb in Knysna, but we imagine Pikes Peak has to be front and center on the team's mind. 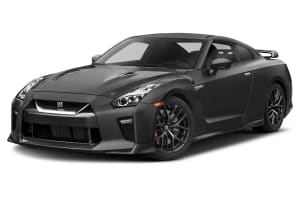