The production version goes on sale in China in 2021

Volkswagen has just revealed its latest, and likely largest, member of the ID. family. It's the VW ID. Roomzz, and it's a large electric crossover concept that seems close to the Touareg or Atlas in size. It also borrows heavily from the smaller, Tiguan-sized ID. Crozz concept from a couple years ago. The biggest differences between the two, besides size, are that the Roomzz has a more formal hatchback roofline, dual light bars at the front, and more stylized full-width taillights.

Mechanically, there's not really anything new here. Like the other ID. models, it uses the MEB platform and features dual electric motors producing 302 horsepower that let it hit 62 miles per hour in 6.6 seconds. The 82-kWh battery pack returns an estimated 280 miles of range on the WLTP cycle, and would probably be a bit less on the EPA test cycle. The ID. Crozz would be a little quicker than its larger and heavier ID. Roomzz sibling and, with an estimate of 300 miles, a little better on range. That makes sense, since both crossovers use the same drivetrain. A fast charging system allows the battery to be charged to 80-percent capacity in about half an hour. 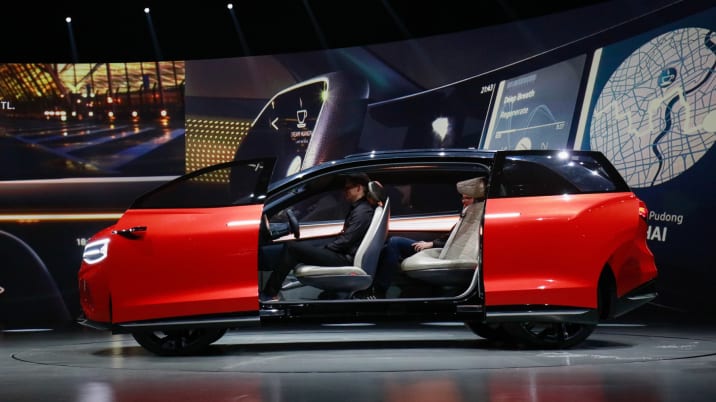 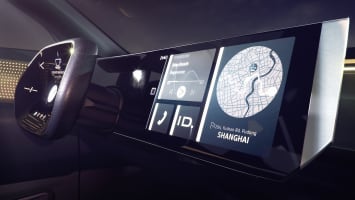 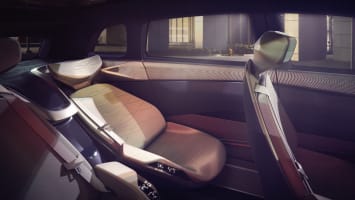 The interior is also reminiscent of other VW I.D. models with a rectangular steering wheel, two screens for instruments and infotainment and pedals with pause and play symbols for brake and throttle. The controls will retract away when the concept is placed into fully autonomous mode, and the seats can rotate around so all occupants can converse comfortably. The interior is rather luxurious with wood trim and stylish ambient lighting. The ID. Roomzz doesn't forget its environmentally-friendly mission either, as it uses a leather substitute called AppleSkin, which is apparently made from waste from apple (the fruit) products. Interestingly, despite the crossover's large size, the concept only has four seats, making it more of a high-end luxury vehicle a la Audi Q8.

Volkswagen also announced that a production version of the I.D. Roomzz will go on sale in China in 2021. No plans for other markets were announced, but it seems like a logical choice for the U.S., too. Since the I.D. Crozz is slated for U.S. sale in 2020, and the I.D. Buzz in 2022, the Roomzz could possibly slot between the two.

We suspect the production version of the Roomzz won't have the full autonomous features of the concept or the big sliding side door, but it will probably at least have a third row of seats available as an option.