View All Specs
Add a Review
The 2019 Toyota Yaris sedan received a very minor update for this model year, dropping the iA name (a carryover from the days of Scion) and adding a few trim levels. The car is still based on the Mazda2, a vehicle no longer sold in America. Aside from the badging and the grille, the styling both inside and out is distinctly Mazda. Before, the car was only available in one basic spec (again, a legacy of Scion), but now Toyota is offering three separate trims — L, LE and XLE. All three are still powered by a 1.5-liter inline-four, though only the L and LE are available with manual transmissions. The automatic improves fuel economy by 1 mpg across the board. Standard features on the XLE include leatherette seating, a 7-inch infotainment screen, keyless entry and ignition, and automatic climate control.

Editor-in-Chief Greg Migliore: The Yaris is one of the stronger, better-looking cars in this diminutive class. It looks far nicer than its predecessors, and the interior is better than expected for this price point. Thanks to its Mazda genetics, the Yaris handles well with a tight chassis and solid steering. It's a tossable little sedan. I was able to get a carseat in back, which was slightly challenging with a car this small but nothing crazy. The Yaris is fun-to-drive, attractive and a decent bargain.

Senior Editor, Green, John Beltz Snyder: Approaching the Yaris from the side, I liked the silhouette, the rounded roof, the playful character lines and the wheels pushed to the corners. Then, as I rounded the front, the car transformed into a big, blue largemouth bass. The way the grille angles to a point near the bottom, with that angle echoed by another crease beneath the headlights, just looks like it's about to swallow a Hot 'N Tot. The inside of our tester was pretty sparse, but nice. It reminded me of the higher trims of the Corolla I recently drove. Even better, I was able to fit my Nalgene in a spot in the door.

While slow, the Yaris is actually pretty entertaining to drive. It's small and easy to place in gaps in traffic, and offers plucky handling and a sense of confidence through the steering wheel. I spent a lot of time in the Mazda2 in days of old, and really loved it. The Yaris, bearing much of the 2's DNA, brought back fond memories. I can't wait to give the r ecently unveiled Yaris Hatchback a try.

It's that time again. @nalgene check in the @Toyota Yaris. @therealautoblog pic.twitter.com/tBTdF7961Y


Associate Editor Joel Stocksdale: What really impresses me about the Yaris sedan is how grown-up it feels. It may be a tiny car, but the interior is very stylish and has nice plastics. The leatherette touches really elevate the car. The driving position is very comfortable, too. Adding to all of this is a generally refined driving character. The ride is a tad firm, but very well controlled. The car is quite quiet for this segment, too. It's basically what you would expect from a car a size up, but vacuum packed.

What I'm a bit disappointed about is that it doesn't feel as much like a Mazda as I expected. There's a fair amount of body roll and understeer, and not much grip. It's just not as sporty as Mazda-branded cars. The engine's 106 horsepower is just barely adequate, too, evidenced by the automatic transmission's desire to hold gears as long as possible when demanding moderate acceleration.

But overall, the Yaris sedan is a very good tiny car, especially if you don't want to sacrifice the comforts of larger cars. I just wish it was a bit more fun. 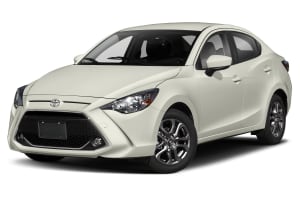