Ferrari has five debuts planned this year, one of which we've seen in the F8 Tributo. The next four will add to and update the mid-engined sports car range as well as the front-engined GT range. Car magazine thinks it has a bead on the long-awaited Ferrari six-cylinder engine that will sit in the middle of some new sports car definitely not named Dino. According to Car's sources, the 2.9-liter twin-turbo V6 works up 610 horsepower and 443 pound-feet of torque by itself. Given plug-in hybrid assistance and an e-motor between the engine and transmission, the numbers grow to 723 hp and almost 800 lb-ft.

The magazine says there's also room for an e-motor powering the front axle "at a later stage." Since Ferrari CEO Louis Camillieri nixed the Dino name, it's said the moniker 486 could get a call-up when Ferrari reveals the powerplant, expected to happen in May.

We just need to see where that engine is going to go, since the carmaker's V8 hybrid is also due this year, and also rumored for a May reveal. The V8 hybrid will fit inside a new flexible platform and power a mid-engined model above the 710-hp F8 Tributo in the range and more profitable than the 812Superfast. The F8 Tributo sits on a heavily updated version of the 488 platform, which itself was a heavily updated version of the 458 platform from 2009. The new mid-engined model will focus on track performance. Ferrari has confirmed that its new mid-mounted platform will be able to adopt the V6 family.

The brand's SVP of commercial and marketing, Enrico Galliera, told Australia's WhichCar, "So the technology we are going to have, V12, V8, V6 turbo. Hybrid will give us the possibility to have a platform that we can mix to achieve emissions targets." Since the other three Ferrari debuts are predicted to be in the GT and ultra-luxe categories, it's possible the V6 will introduce an entry-level option for a model like the Portofino.

Or it could grace a new, more traditional model. There's a new "front-engine hybrid architecture for host of new cars, including Purosangue SUV," the SUV not due now until 2022. Galliera also told WhichCar, "We are developing some products that are designed to give the same emotion as a Ferrari." They will be sports cars, "but with this design that it is more elegant that is more for everyday driving in order to attract those people that maybe are not considering to buy a Ferrari, because they are not willing to have a highly sporty car. So in a way, we are trying to have an offer that is capturing both opportunities." Late CEO Sergio Marchionne mentioned that kind of model two years ago.

Don't be surprised by another entry in the Icona line this year, too. Bloomberg reported that Camillieri "will remain focused on revenue and margins, rather than volumes," and high-dollar one-offs like the $ 2 million Monza are key to the strategy. 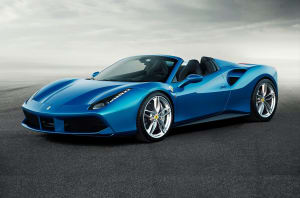