Reese Counts
These days, BMW is mostly associated with automobiles, but the German automaker's first cars were preceded a few years by a range of motorcycles. The two-wheeled division continues now as BMW Motorrad and offers a range of both sport and adventure bikes. Today, the company announced an updated 2019 lineup, including a new line of M options and M Performance parts for the S 1000 RR. 
The new S 1000 RR is both lighter and more powerful than its direct predecessor. There was a heavy emphasis on weight reduction. Power comes from a 1-liter inline four that's 8.8 pounds lighter than before. Thanks to some trick BMW tech, the engine has ShiftCam variable valve timing as well as variable stroke on the intake valves. U.S.-spec models make 205 horsepower at 13,500 rpm and 83 pound-feet of torque at 11,000 rpm. Overall weight is down to 434 pounds, though models with the M Package see weight drop to just 427 pounds. Other changes include a revised suspension geometry, an upgraded ABS system and revised instrument cluster. 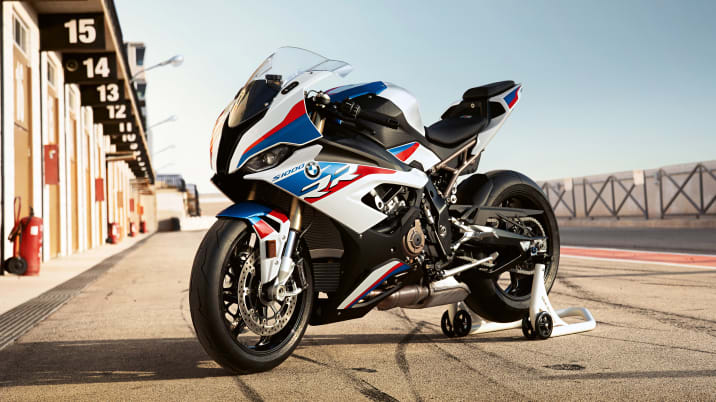 The S 1000 RR will have both an optional M package as well as a range of M performance parts. BMW Motorrad says this is the first time parts like these have been offered on a bike like this. The M package includes a motorsports livery, carbon-fiber wheels, a lightweight battery, an M chassis kit with rear ride height adjustment and swingarm pivot, a sport seat and a Pro Mode that alters drive settings. Details on the other performance parts are unclear. In collaboration with Shaun Muir Racing, BMW Motorrad Motorsports will enter the S 1000 RR in the 2019 FIM World Superbike Championship. 
In addition to the S 1000 RR sport bike, BMW Motorrad is updating its roadster, touring and adventure motorcycles, too. Like the S 1000 RR, the R 1250 R, R 1250 GS and R 1250 GS Adventure benefit from BMW's ShiftCam technology. The tech helps improve low-end horsepower and torque on the larger 1.25-liter boxer 2-cylinder engine. Horsepower is now at 136 and torque is up to 92 pound-feet. Additionally, the new engine reduces emissions and improves fuel economy. Other changes to the engine include a new cam chain, a revised oil supply, twin-jet injection valves and a new exhaust system.

The R 1250 RS and R 1250 GS Adventure both get standard LED headlights. All three models have optional LED daytime running lights. There are upgrades like a 6.5-inch instrument display and range of new optional equipment like handlebars, seats and colors.

The new F 850 GS Adventure packs a new boxer 2-cylinder engine making 92 horsepower and 69 pound-feet of torque. It has a new steel bridge frame, an upside-down telescopic fork, a two-sided aluminum swing arm and a central spring strut. Like the other motorcycles, it gets a full-color 6.5-inch display and optional LED lighting. The six-gallon fuel tank is good for 342 miles of range.