2019 Audi A8 L Review | Brilliant engineering in an unassuming wrapper

Extreme digitization and all the hardware necessary for Level 3 autonomy

Remember that unassuming guy from high school who turned out to be weirdly and completely brilliant once you got to know him? You would have never guessed that beneath his quiet façade were valedictorian smarts and presidential ambition. The 2019 Audi A8L is that guy.

Allow me to explain.

Back when Audi was scheming on how to steal would-be BMW 7 Series, Lexus LS and Mercedes-Benz S-Class buyers with their next-gen A8, they threw everything they knew (and a few things they didn't) at future-proofing their flagship sedan. First and foremost, the big four-door was intended to be the world's first production Level 3 autonomous vehicle. Using an arsenal of visualizing aids — a long-range radar, a front camera, four mid-range radars, several 360-degree cameras, up to 12 ultrasound sensors, and the world's first-ever laser scanner — the A8 is capable of creating a three-dimensional map of its immediate surrounds and "look" up to 328 feet ahead.

But a funny thing happened on the way to the future: While the next-gen A8 was being developed, the U.S. regulatory process shifted from federal guidance to state-dictated mandates, meaning autonomous technology would need to be approved on a one-by-one, state-by-state basis. While the A8 retains the same architecture that was compatible with Level 3 autonomy, it lacks the redundancy systems that enable the car to completely take over driving duties. Incidentally, Europe also hasn't finalized legal guidelines for Level 3 autonomy, but when that solidifies Audi will roll out Traffic Jam Assistant, in Germany first. So for the time being, the A8 is strictly classified as Level 2. "We're very clear on the fact that you're still driving the car," Audi product manager Anthony Foulk told Autoblog. "It's assisted driving, not self-driving." 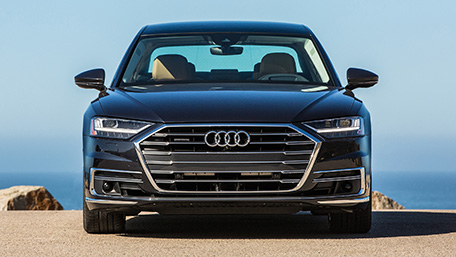 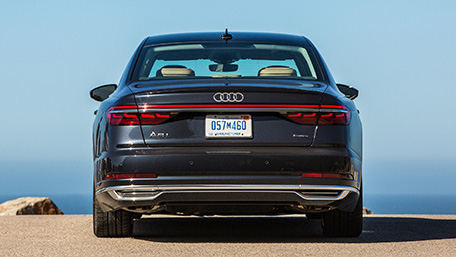 OK, then. That said, the theme of extreme digitization still carries into the interior design, even if the A8 can't (yet) drive itself. In the interest of creating a clean, aesthetically sleek cockpit, no fewer than 35 buttons have been eliminated, replaced with a 10.1-inch black panel touchscreen and another 8.6-inch touchscreen below it. The only hard buttons that remain are a volume/power knob and a few other key controls. Rounding out the flatscreen theme is Audi's next-generation virtual cockpit, which places a larger, higher-resolution monitor ahead of the steering wheel for a Google Maps and gauge cluster display. The new interface is dubbed MMI touch response, and uses haptic and audio feedback.

The good news? The system is intuitive and easy to use, with thoughtful details like small, dedicated touch-sensitive sliders that enable you to open and control the airflow of HVAC vents that are elegantly hidden behind swiveling veneer doors. That feature is a relief, as the Porsche Panamera's similar interface is so extremely de-cluttered that the direction of the air vents can't be changed without delving into an electronic menu.

However, the elimination of traditional switchgear (save key controls like a volume and power knob) isn't necessarily a 100 percent win/win. While it takes a firm press to trigger haptic feedback, the system can be switched to heat-sensitive inputs that work more like an iPhone's screen. But as well as the system works, there's still something to be said for the feeling of interacting with a mechanical switch, especially when it's as nicely weighted as the hardware on the outgoing A8. Try aiming for a precise spot on the screen with your forefinger while you're traveling over a bumpy road, and you'll find that it takes more attention than it should to complete a simple task. While touchscreens offer a tidy visual package, there's an element of the interactive ergonomic experience that's been lost to technology. 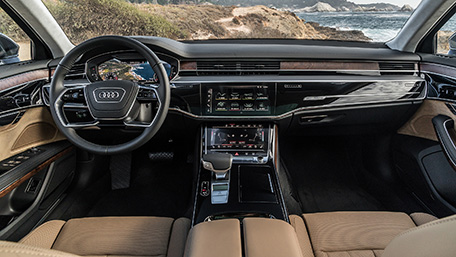 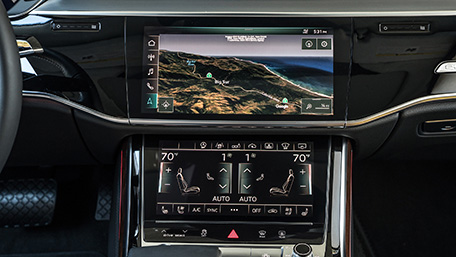 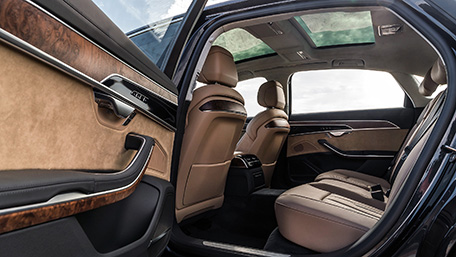 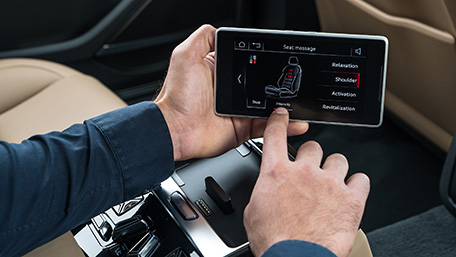 Beyond the dazzling touchscreens, the A8's interior elegantly combines nicely finished surfaces — open-pore woods, brushed aluminum trim, piano black bits and soft Valcona leather, which is Audi's derivation of Nappa leather — into a harmoniously appointed space. The cabin feels minimalist but sophisticated and pleasant, as does the driver experience in the 3.0-liter turbocharged V6 model we tested along the gorgeous coastal stretches of Highway 1. The 335-horsepower mild hybrid engine couples with a ZF eight-speed to produce quiet, silky acceleration.

While adjustable drive mode settings change the drivetrain, suspension and steering settings, don't expect the A8 to transform into an R8 at the touch of a button: the changes are subtle, with an overall bias towards smoothness and comfort over outright performance. There's decent power on tap, but passing slow-moving rental cars along Highway 1 requires some planning; don't expect explosive forward motion, but rather a linear escalation of speed and nearly imperceptible gear changes.

With a hefty curb weight of 4,751 pounds (around 250 lbs more than the previous model, due to the added weight of the 48-volt electrical system and extra equipment), the A8 feels less eager than you might expect. Its claimed 0-60 time of 5.6 seconds makes for adequate oomph for brisk driving; expect a more aggressive, V8-powered S version next year. As for the active driver assistance systems like lane assist, don't count on it on the twisties: the A8's lane keeping technology works well enough on straight or barely bending roads, but twistier routes allowed the car to veer over lane markers, making it a wiser choice to simply take the wheel yourself. 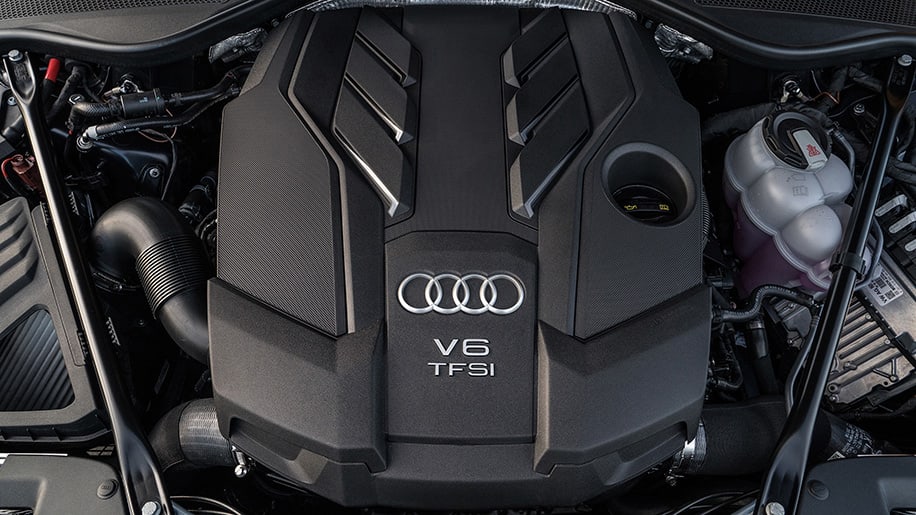 The new dynamic four-wheel-steering system, a $1,950 option on top of the A8's $84,795 starting price, makes a noticeable improvement in the car's maneuverability and handling. It reacts in 20 milliseconds (much quicker than the Q7's older system, which requires 50 milliseconds to respond), countersteering for agility at lower speeds and steering in phase for stability at higher speeds. But here's an interesting detail: The new setup also actively steers the front wheels, sometimes overriding driver inputs to turn the wheels more (to rotate the car) or less (to alleviate an understeer situation) when it decides it's needed. The system considers data from steering wheel input, speed, and vehicle dynamics, and is surprisingly seamless in operation.

Back-to-back drives on a closed autocross course revealed a dramatic difference: The A8 with the four-wheel steering switched off felt big and sometimes unwieldy, and unable to make one tight corner without a three-point turn. With four-wheel steering switched on by an engineer in the passenger seat, not only did the A8 turn more sharply and easily, it exhibited better body control during an abrupt lane change and didn't require a three-point turn to execute the tight corner. The four-wheel system reduces the turning radius by 3.6 feet, shrinking it to a turning circle smaller than an A4's.

The A8's standard adaptive air suspension system works well at absorbing bumps and potholes, but a demonstration of the A8's soon-to-be-available AI active suspension system uses next-level tech to smooth out the ride. Working in conjunction with road scanners and the car's 48-volt architecture, a small electric motor is capable of extending the suspension when a pothole is detected, enabling the car to lift slightly and then glide over the imperfection. The technology works up to around 37 mph, and manages to greatly minimize the body movement as the wheels negotiate the bump or dip. Driving over several speed bumps on a test track revealed that the system works well. While the Mercedes-Benz Magic Body Control technology uses a similar concept, M-B's hydraulic system is slower reacting and can only push the wheel down, while Audi's can push or lift the wheel in order to improve the ride. 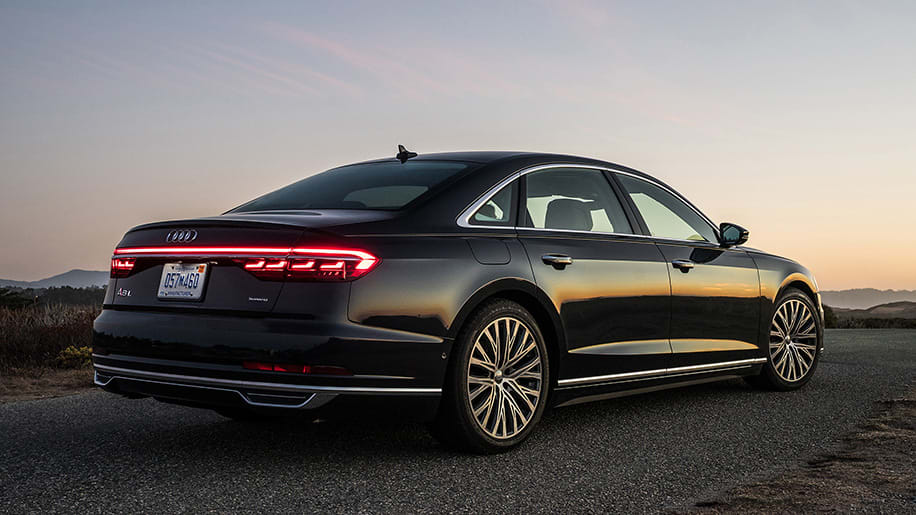 All that talk about technology and engineering inevitably brings us back to the A8's looks. Remember that bit about its unassuming appearance? While Audi describes this new design language as being "flowing" with a "muscular vehicle body" and citing the brand's legendary "Quattro blisters" from the swollen wheel arches of their rally-inspired predecessors, the A8 still manages to look so understated that it blends into its surroundings. Compared to the biggest Benz and Bimmer sedans, the Audi seems somewhat dowdy; against the spindle-grilled Lexus LS, it's minimalist and understated. But that's the thing: The Audi A8 is a brilliantly engineered machine that seems more intent on getting everything right than serving up a distinct personality.

If you don't mind the somewhat clinical styling, you'll get a sophisticated, capable übersedan that does what it does rather well. However, if you absolutely positively must have the most engaging, dynamic package in a flagship sedan, you might want to wait for the spicier S version, which should offer incrementally edgier styling and performance. Regardless of where you fall on its (admittedly subjective) styling, Audi's new A8 L takes a quantum leap forward and puts its competitors on edge, shaking up a competitive segment with technology and features that will eventually trickle down to lesser vehicles. 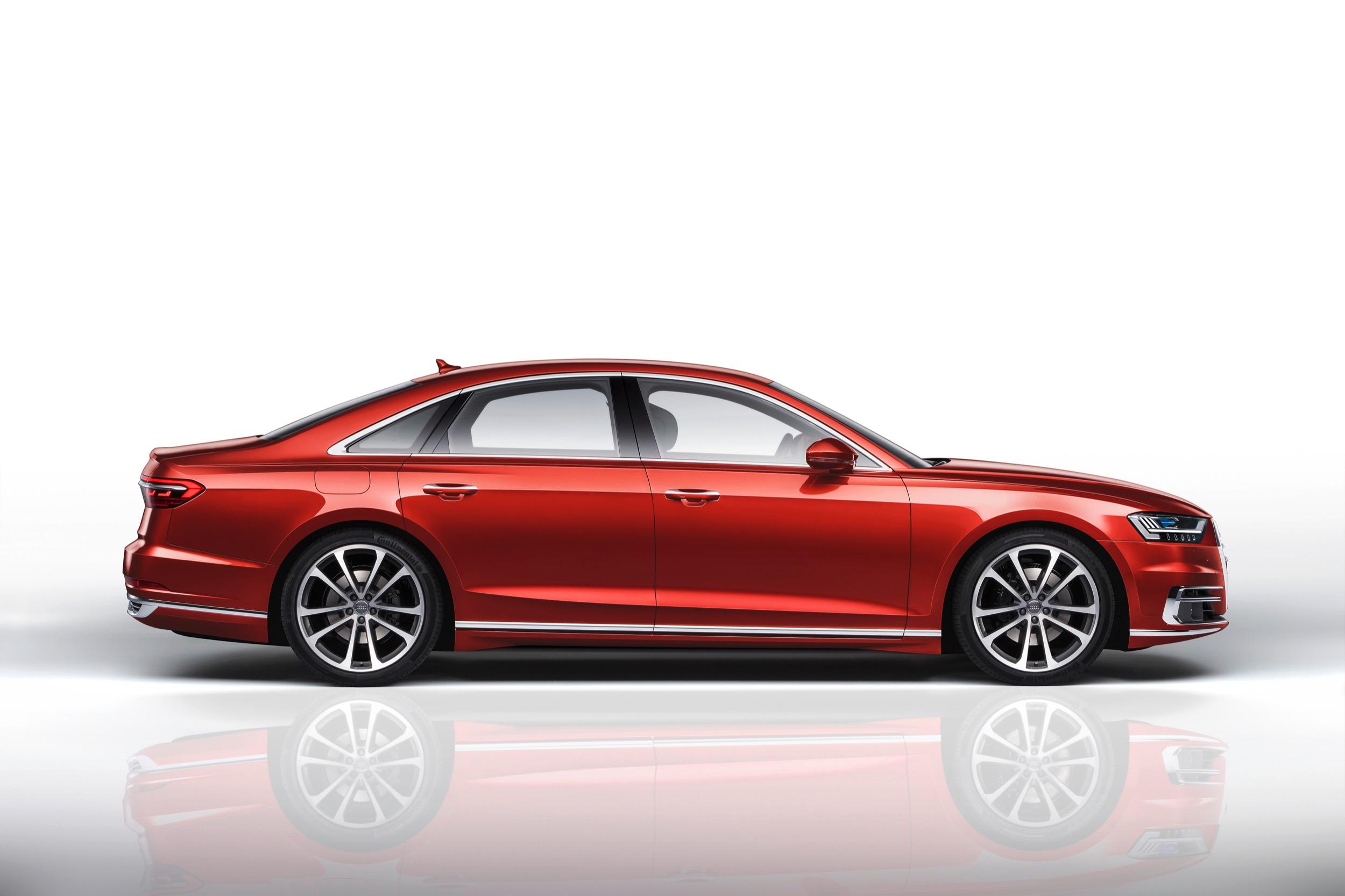