Updated headlights put it over the top If you're looking for a new subcompact car, and safety is your priority, there is one clear choice now: the 2018 Kia Rio. The littlest Kia has been awarded the highest safety rating from the IIHS, the Top Safety Pick +, and it is the only car in the subcompact segment to earn the score. In addition, only two other models earn the second highest rating Top Safety Pick, sans plus, the Hyundai Accent and the Mini Cooper.

The Rio's rating is an increase from the sans plus version because Kia updated and improved the headlights for the 2018 model. There is a caveat, though. Only the optional LED projector headlights, available as an option on the midlevel S trim, are rated "Good," the highest IIHS rating. The standard halogen headlights are still rated "Poor." The Rio's forward collision prevention system that earned full marks is also only available as standard equipment on the top-level EX trim.

Still, even lower-trim Rios with the less capable headlights and no automatic emergency braking boast strong crash test scores. Every test except for the passenger-side small overlap test resulted in Good ratings. The passenger-side small overlap test garnered the second-highest rating of "Acceptable." And on top of that, it's a car that has impressed us every time we've driven it. 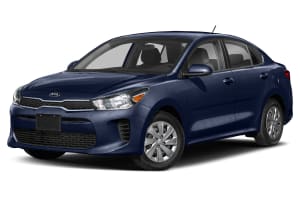