Designed and built by college students, with no performance loss

HOLLYWOOD, Calif. — I was standing in a parking lot in Los Angeles looking at a line of 16 Chevy Camaro hybrids. Yes, real and (mostly) functional cars, each one designed and developed over the past four years by groups of students from different universities across the U.S. and Canada. Four years of blood, sweat and tears were poured into these cars. I was just praying I wouldn't be the guy who breaks one.

The cars were built as part of the EcoCar3 competition sponsored by GM and U.S. Department of Energy. As the name implies, this is the third Advanced Vehicle Technology Competition, which happens every four years. Basically, GM donates cars — in this case 2016 Chevy Camaros with automatics and a V6 — to each university. The students are given a loose framework and set of goals that boils down to making the car more fuel efficient while not losing anything in performance. This is the 11th AVTC competition and the third branded as EcoCar. 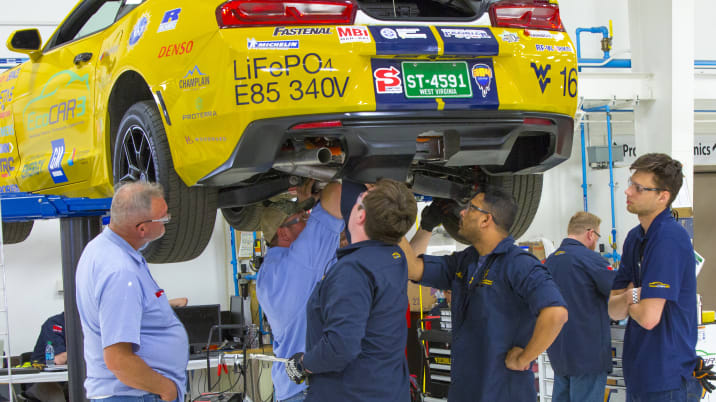 Teams have four years to build their cars. The first year is all focused on planning and computer models. Things ramp up in years two and three, with finished cars expected in year four. The cars are expected to have near production levels of fit, finish and drivability. Teams are judged on things like fuel economy, total range and tailpipe emissions as well as more subjective metrics like marketing. The goal is to build production-ready cars, so why invest in a car that someone won't buy?

That's a tough task for anyone, much less a group of undergrads who had to deal with a full class workload as well as all the other stuff that comes along with being a college student. Nights and weekends were given up to work on this car. The fact that the cars are here at all is a huge testament to each and every one of these students' efforts.

That's why the team from Virginia Tech stuck a 5.3-liter V8 under the hood of their Camaro. People in Virginia like V8s. We don't blame them. At the opposite end of the spectrum, the Mississippi State team put an 850 cc snowmobile engine in their car, and most other teams used a 2.4-liter inline-four. All but one school used a plug-in hybrid system; the University of Tennessee used a more mild parallel hybrid system.

The powertrain variation is part of what makes the EcoCar competition so interesting. Each school used different tactics on engine configuration, hybrid system and battery size. A bigger battery might provide more range on paper, but it also adds weight and complexity. At the end of the competition, the cars have to make it through several days of testing at both GM's proving ground in Yuma, Ariz., and Pomona Raceway, just east of Los Angeles. Increased complexity means more things can go wrong, a lesson some teams learned the hard way. 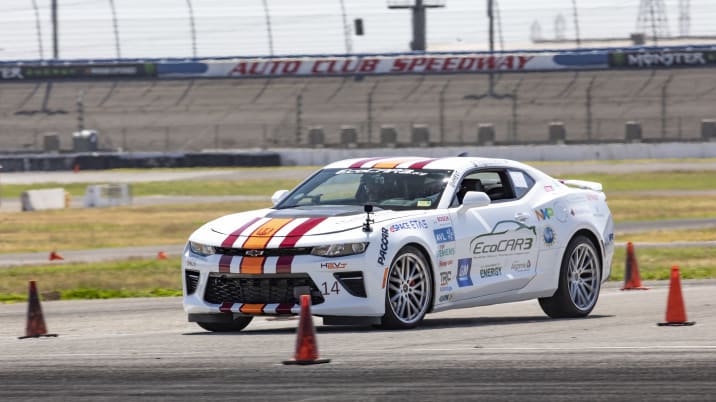 By the time I saw the cars, the competition was essentially over. All the testing and judging was finished, but the DOE and GM had yet to announce the winner. That gave me incentive to try out a variety of vehicles. Each car — most done up in the colors of their respective universities — was surrounded by a gaggle of students, each one happy to answer all the questions I had. Mostly, I wanted to know what separated each car from the pack and how things went during the testing phase, since not every car made it through unscathed.

The first car I drove belonged to Ohio State University. OSU's car was a series-parallel plug-in hybrid that used a naturally-aspirated 2.0-liter inline-four, and 18.9 kWh A123 battery and two electric motors (one from Parker and the other from Denso). I also drove cars from the University of Alabama, West Virginia University and the V8-powered car from Virginia Tech.

Each car felt different, with varying levels of success and refinement. Some had extremely touchy accelerator pedals, others had some inconsistencies with the regenerative brakes, but I didn't once feel like I needed to baby them. No one asked me to take it easy, either. Yes, I did break the tires loose in VT's hot rod.

I walked away hugely impressed with the cars I did drive. They didn't feel like homemade, slapdash projects. For better or worse, they mostly just felt like Camaros. But that was the point. Improve the efficiency without losing any of the flavor.

I wasn't the only one walking around inspecting the cars and interviewing the students. I saw employees from Tesla and Faraday Future all out looking for new talent. That's probably the best part of this whole competition. Sure, the cars are rad, but the fact that all of these students were getting real, hands-on work on real cars is amazing — they might be able to turn that into a rewarding career. I know friends who had similar experiences in college working on Formula SAE race cars. They now work at major OEMs, thanks in part to the experience they gained as student engineers.

There's no getting around the fact that fuel economy and emissions standards are getting stricter. It doesn't seem like most sports cars can continue to exist in their current state. Electrification appears to be the wave of the future, providing a boost in efficiency and torque while preserving ICE powertrains. While a hybrid system might seem antithetical to the Camaro's ethos, if we still have V8s and torque and smoky burnouts, things won't be so bad.