3 Reviews
MONTICELLO, New York — We get it. Superfans only want to hear about the yin versus yang. iPhone versus Android. Batman versus Superman. The Ford Mustang versus its Bizarro World twinsie/frenemy, the Chevy Camaro.

So on our first drive in a 2018 Mustang GT equipped with the Performance Pack Level 2, we could break down every bit of minutiae to dissect the Level 2 versus the Camaro SS 1LE.

But frankly, we just don't give a damn.

Either the Level 2 upgrades are worth the extra $6,500 on top of the price of a manually-equipped Mustang GT fastback, or they aren't. A sports car better stand on its own merits, and not as a counterbalance to some other machine.

We are on the south course of the Monticello Motor Club, a 3.6-mile racetrack in New York's rolling Catskills. I've driven everything from a Pagani Huayra to a Camaro ZL1 here, and this set of elevated twists will call out weaknesses even on great vehicles. 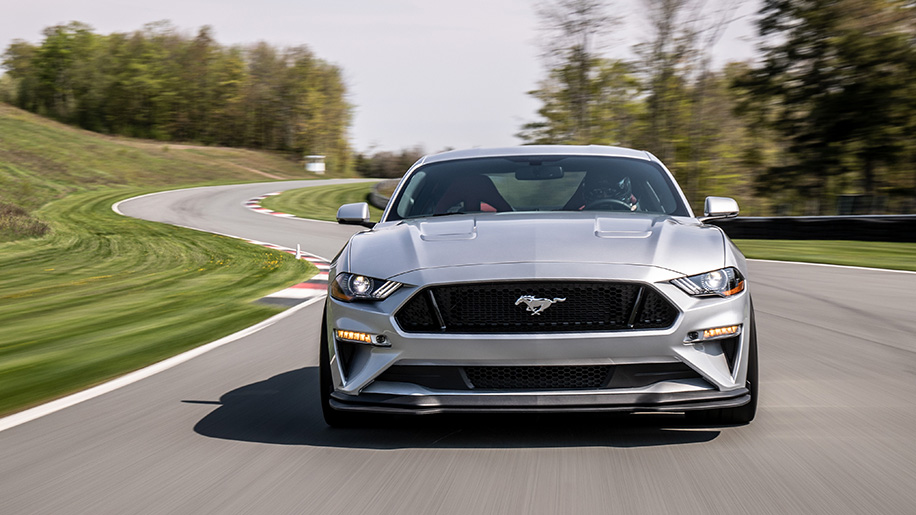 Will the Mustang Level 2 tear up this challenging carnival ride of a road course — or be torn down?

It should be noted that in the new 5.0 hierarchy, the Level 2 is still not a dedicated track warrior. It's far more aggressive than a regular GT, and sees significant advances over the Performance Pack Level 1. But it remains a far cry from the singular focus of the Shelby GT350 or GT350R.

The Level 2 was developed by the Mustang engineers as a semi-skunk-works program. They had a little extra time in the development process, and various components that could be used for upgrades, and they wanted to see how far they could push the platform.

As such, it is only available with a manual. The 5.0-liter V-8, with 460 horsepower and 420 pound-feet of torque, is unchanged. But it now comes standard with magnetorheological dampers, which are an option on Level 1, and a Torsen rear differential. And most significantly, the car is outfitted with the performance tire du jour, Michelin Pilot Sport Cup 2s, the same rubber at the front of the GT350R.

While we also drove the car on legal roads, we figured the best way to gauge the efficacy of the upgrades was to see how they handled an unruly racetrack. And while much of the day was soaked by rain, we got in enough unfiltered laps early in the morning to get a convincing picture of the car. 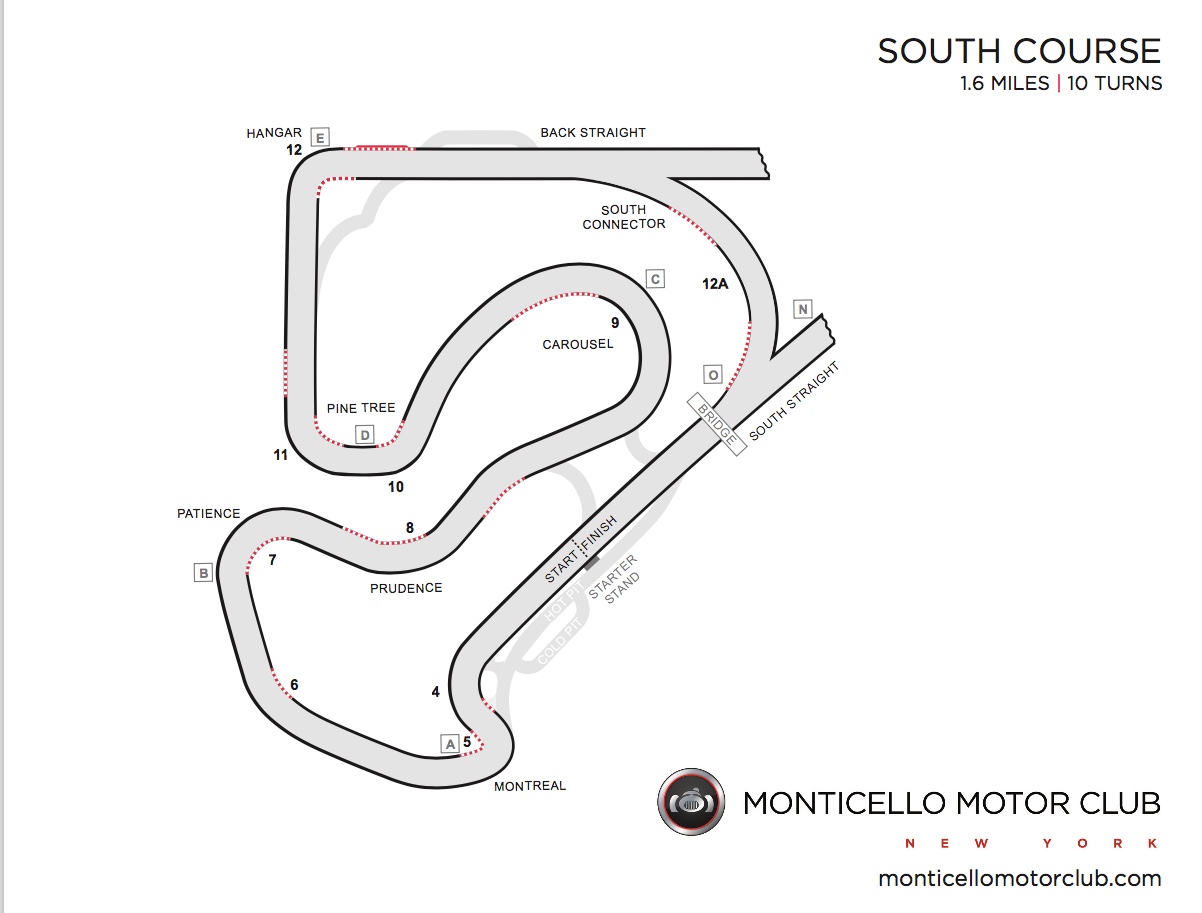 1. Bigger brakes and magnetic dampers versus a downhill braking zone (12a into Turn 4)

Our silver GT is flat out at the top of third gear as we bomb down the straightaway that runs alongside pit lane. This stretch drops steeply in elevation, and the braking zone is totally downhill. It's a tough demand of any car, with the asphalt getting steeper near its terminus. You're asking for rear stability even as the nose becomes increasingly weightier.

A regular GT has only four-piston calipers and 14-inch rotors. Both Level 1 and Level 2 performance packs get Brembo six-pistons and 15-inch rotors. At first I treated the stoppers delicately, fully expecting the front end to overload and the rear to wiggle. But the pedal feel was confident, and the car remained remarkably balanced.

On my second session, I started jamming on the middle pedal, shedding speed hard and fast so that I could bleed off and get the front tires ready for the ensuing left-right turn. The car barely pitched. At the end of day, no other element of the car impressed me as much as this.

Though they are exactly the same, the brakes actually feel mightier on the Level 2 over the Level 1, a fact that Widmann attributes to the MagneRide suspension.

"The electronic calibrations let us really bring the car to life, especially with the MagneRide's ability to control pitch and yaw," he said. "Under heavy braking, it helps maintain a flat position, so the front of the car isn't over-pitching. It's a virtuous circle." 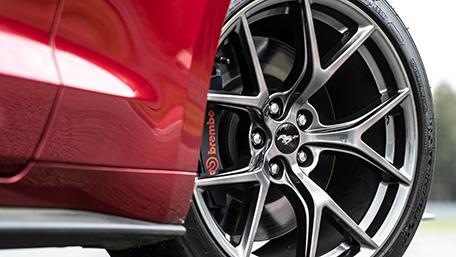 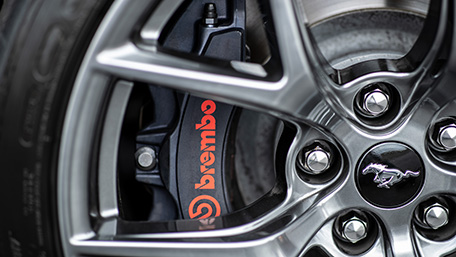 Turn 4 is at the very end of that hill, an arcing left that almost immediately cedes to a slow, pinched right-hander. Since you're just off the brakes, it's hard to be smooth here, even in a mid-engine car. It's kinda like transitioning from an all-out sprint to tap dancing.

The Level 2 received significant structural bracing — or as Widmann describes it, "Lots of changes in steel." Those changes include extra bracing in the strut towers and the front subframe, as well as thicker sway bars front and rear. The springs are stiffened, too. The promised net result is a more confident flow through corners with less lean.

Mustangs handle better than ever, especially since getting an independent rear, but there's still a sense of manhandling them through complex corners. The Level 2 alterations keeps the whole vehicle bound together. The new car handles the swift, quick directional change ably enough — if not brilliantly — and I begin to treat the Ford more like a momentum machine, which it turns out to enjoy. Less muscle, more brains. 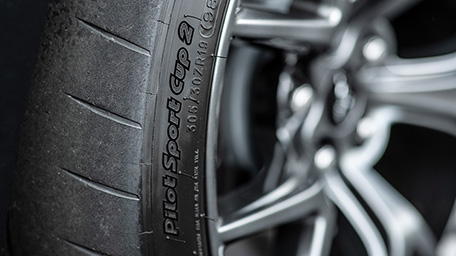 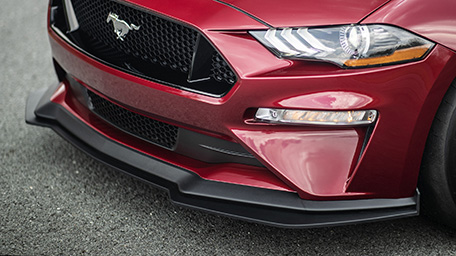 My favorite section of Monticello is a long uphill carousel. There's no real camber to this uphill sweep of pavement, and how a car handles here tells you much about its steering, grip, and aero, especially on the front axle. The goal is to maximize front grip without overworking the rubber. Push wide and you'll fight to get to the inside curbing at the top. Tough.

If there's one truly bit of secret sauce to the Level 2, it's the new tires. The Michelin Pilot Sport Cup 2s are also being used by competitors. In the past month, we've tested them on the latest Corvette ZR1 and Porsche 911 GTR RS. In each case, they delivered spectacularly.

The Level 2 rides on bespoke 19-inch wheels and gets 305s on all four corners; they are a full 1.5 inches wider than those found on Level 1. They even stick out past the arches. How gonzo is that?

Using track mode, we splashed through a channel of water crossing the track, and headed up the hill at 85 mph. Tellingly, even with damp tires we managed to keep a firm maintenance throttle the entire time, the bounty of the Michelins' monster grip. I wish we'd had both more laps and dry asphalt to see just how far they could be pushed. The front stuck resiliently to the road, with excellent feedback telling you just how the tires were behaving.

The Ford engineering elves pilfered the front splitter of the Mustang Boss 302 Laguna Seca for the Level 2. They say it creates 24 pounds of downforce at 80 mph. That's not exactly transformative, but it probably does account for some of that front-end surety. The car also shows off its steering and revamped stability control nicely here. 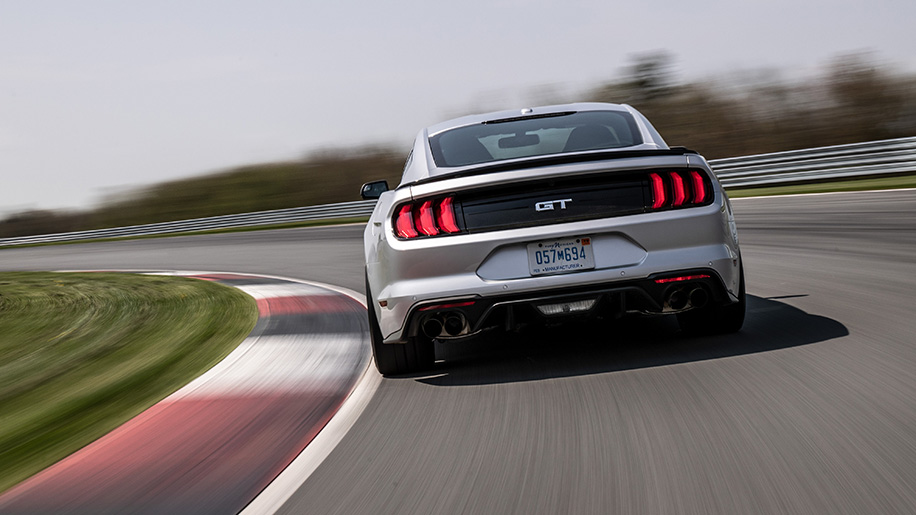 4. The Level 2 versus a regular road

The changes also make a difference on the streets. The Monticello area had suffered heavy winds the night before our drive, and the roads were littered with debris and downed trees and electrical lines. We weren't trying to add to the public's issues by tearing around quickly.

But the same things that make the car so capable on track aren't necessarily great out here. It is very hard to keep heat in the Cup 2s, and the width of the tires created significant tramlining. We found every crease in the asphalt. The good news was the chassis was less jarring than expected, and the front splitter is elevated enough to handle driveways. If not totally civil, at least it's not a civil war.

For $6,500 over a base GT, the upgrades are indeed transformative. If you're looking to eek all the performance possible from the new Mustang — and give up a sizable measure of everyday use due to the new tires — the Level 2 is a heck of a buy. It even hangs ably at Monticello on a less than perfect day. No matter what other car the Mustang is going up against, that's saying a lot. 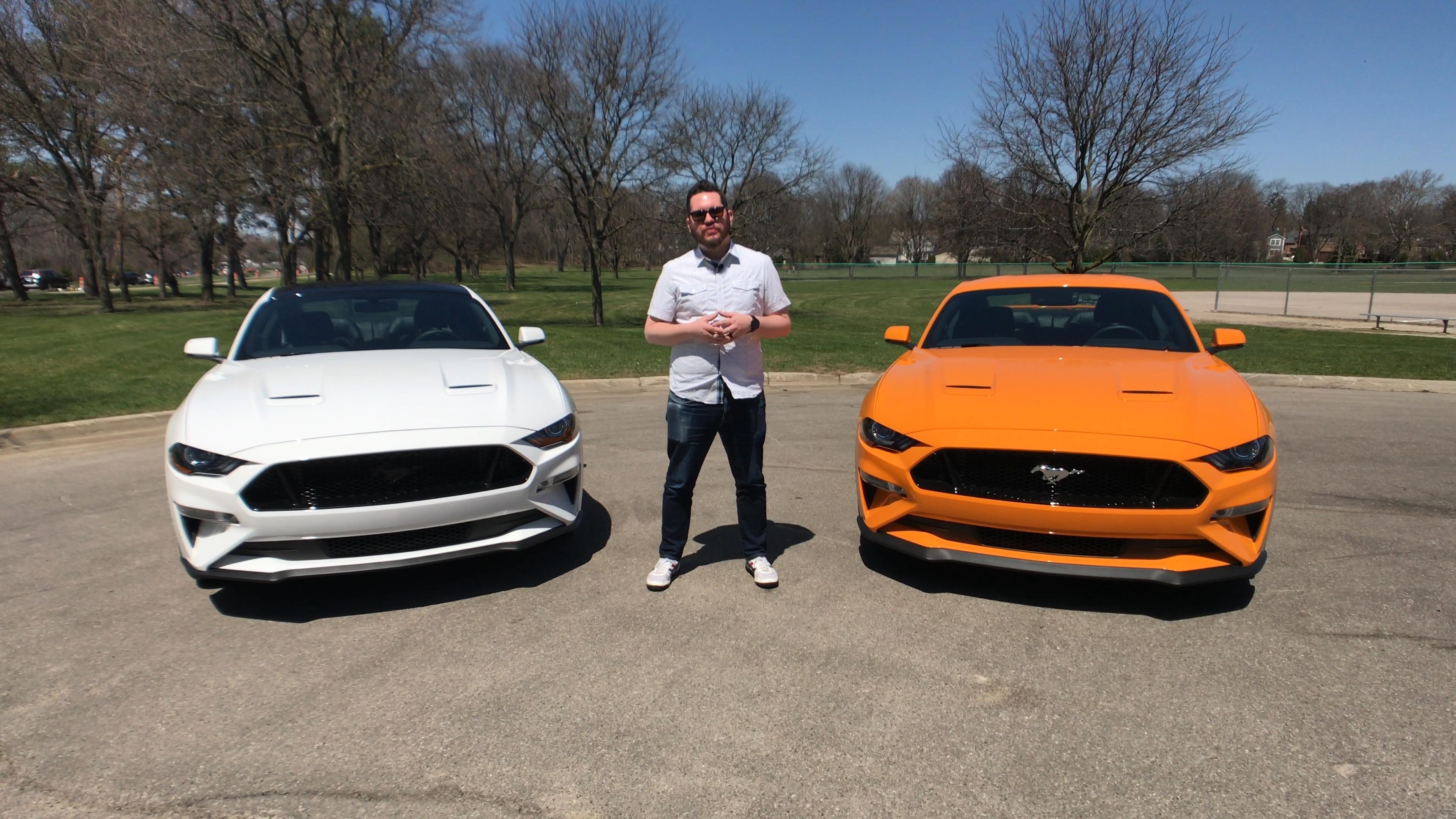