Both more and less similar than you think

Joel Stocksdale
We had both a XF Sportbrake S and a V90 T6 AWD R-Design come through the office recently, and since they're really close competitors – both fairly large wagons, both luxury vehicles, both have sporting pretenses, and both feature all-wheel-drive. And in the case of our test cars, they're equipped very similarly, but at divergent price points. Is the Jaguar worth the premium? Let's take a closer look. 
The Volvo is available in a variety of configurations. In fact, you can have a V90 R-Design for as little as $50,945, but you'll be making do with the front-wheel-drive T5 model that has just a 250-horsepower turbocharged four-cyinder. To match the Jaguar's feature set and to nearly match its performance, you need to go with the T6 with all-wheel-drive. In addition to powering all four wheels, it also adds the 316-horsepower twin-charged four-cylinder. The engine and drivetrain add about $6,000 to the T5's price tag.

The rest of our V90's price increase was made up by a lot of options, including a Convenience Package for $1,900 that came with heated washer nozzles, a surround view camera, grocery bag holder, HomeLink, a compass, and automatic parallel parking. Other options included the upholstered instrument panel and sun shade for $1,150, metallic paint for $595, heads-up display for $900, built-in child seat for $500, carbon fiber trim for $800, Bowers and Wilkens sound system for $3,200, heated steering wheel for $300, rear air suspension for $1,200, 20-inch wheels with summer tires for $300, and the destination charge. All told, it cost $68,290, which is close to the base price of the Jaguar, but a whole lot less than the Jag's as-tested price, making the Volvo a great value.

But value isn't the only reason to buy a car, especially a luxury car. You want it to feel luxurious. It's basically a wash between the two as far as feature content is concerned, but the Volvo is the clear winner for providing an environment that feels special. The R-Design Volvo is probably the least sumptuous of the 90-series Volvo interiors, since none of the lovely satin and natural finish woods available in other versions are offered. Instead, the standard option is metal trim, and the option is carbon fiber, which is starting to feel played out. But Volvo makes good use of the woven material. It's high quality, and the attention to detail really comes through in the center console where the weave is mirrored in the center, and the individual slats of the cupholder cover are arranged to be identical to each other. Add in the multiple varieties of leather that add visual interest without being busy, and fantastic seats with leather and faux suede, and it's an excellent place to while away the hours. 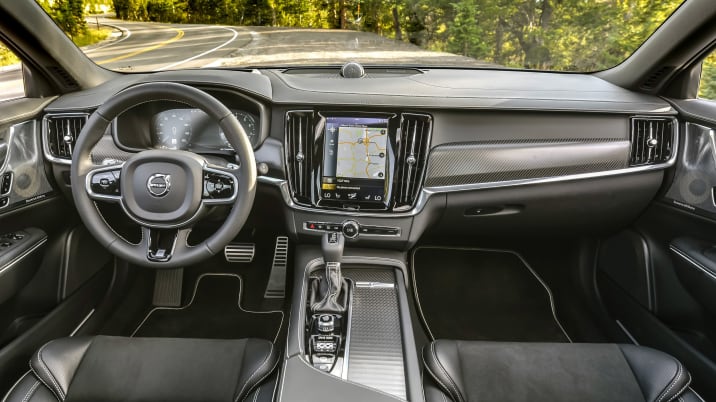 The Jaguar is a significant downgrade in comparison. Hard plastics are more easily noticed, and the center stack is full of dated, fingerprint-attracting piano-black plastic. The leather isn't as high-quality, nor does it have the variation of the Volvo. The seats are less supportive, and the driving position isn't quite as comfortable. Visibility is worse than the Volvo, too, due to much thicker pillars. And everything is amplified by the the somewhat dull dash design. It's not a terrible place to be, but dollar for dollar the Volvo wins.

Both cars do have a key weakness, though, and that's the infotainment systems. Although they look rather different, with Volvo opting for a portrait-layout versus Jaguar's landscape orientation, neither is particularly user-friendly. The Volvo's primary issue is that too many functions require the touchscreen. Setting the climate control temperature, adjusting the heated seats and steering wheel, and really anything that doesn't involve adjusting volume or skipping songs has to go through the infotainment system. It does pick up points for the responsive screen and the fact that no matter what function you're currently using, three other primary functions are always one touch away, meaning you don't have to back out of menus to access something else. It also gets points in the tech department since it supports Apple CarPlay and Android Auto, and it has the rather impressive Pilot Assist steering assist system. It's a hands-on-wheel system that keeps the car centered in the lane and adjusts speed as needed. It also is meant for highway-use only. It's much like Nissan's ProPilot Assist, but it seems to work more smoothly and confidently. However, it was often confounded by off-ramps and wanted to follow the lines for the ramp instead of continuing straight, so it has some issues and like any steering assist system, requires constant attention in case it does something wrong. 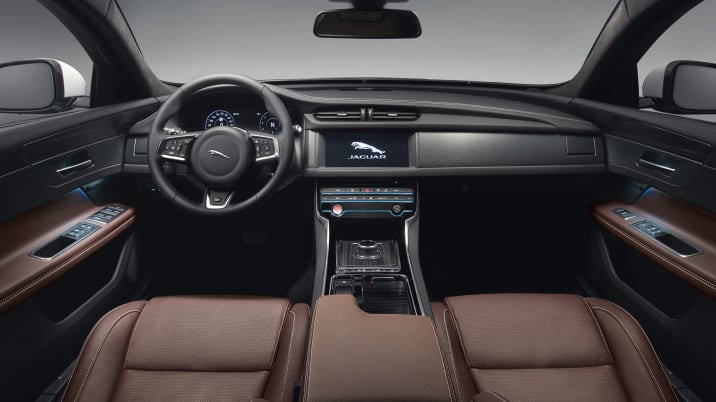 The Jaguar has different issues. The screen is less responsive, and the functions are typically buried in various menus, requiring more taps than we'd prefer. It also lacks CarPlay or Android Auto, which is a major omission nowadays. But it claws back some points in the fact that there are more dedicated physical buttons for adjusting climate and basic audio functions, though we don't really know why you have to use the touchscreen to change the heated seat settings and which vents air comes through.

Up to this point it seems like the Volvo V90 is running away, but the gap closes when the drive begins. The V90 is a perfectly entertaining car. The twin-charged four-cylinder makes good power and is quite responsive, thanks to the supercharger paired with a turbocharger, so it never feels slow, even though it seems to start losing steam in at higher RPM. The growly four-cylinder sounds nice, too, and you can even pick up on some blower whine. It's coupled to an 8-speed automatic that's reasonably responsive, though the shifts have slightly rough edges to them.

It's a pretty fun wagon to chuck around, too. Emphasis on chuck. You can be aggressive with your steering, and it clings on. It's eager to change directions, too. The whole car feels light and nimble, which is surprising considering that it's roughly 500 pounds heavier than the Jaguar. But it's let down by that quick steering. Though it doesn't take much to initiate a turn and is weighted well, the helm is dead when it comes to feedback. It's also difficult to tell exactly where the wheels are pointed, meaning more corrections and adjustments to keep it going the right direction. So it's a good thing it responds well to rambunctious wheelmen (and women). The Volvo's ride is solid, too, absorbing most bumps nicely in every driving mode, though it does feel a bit busy with the body moving around a fair bit. 
But as good as the Volvo is, the Jaguar is much, much better. It's not simply a case of having more power and less weight, though that doesn't hurt. The supercharged V6 feels even more responsive and has a more linear power delivery, plus it has a throttle that allows for very fine control of the engine. That engine is also coupled to an 8-speed automatic that feels easily as quick to shift as the Volvo, but it executes gear changes seamlessly, providing uninterrupted acceleration. The engine simply sounds better, too. In fact, this is one of the best-sounding implementations of Jaguar's supercharged V6. For some reason, it has some real snarl from the exhaust instead of the wheezy muffled noise we experienced in our long-term F-Pace.

The Jaguar's delightful driving package is completed with its excellent ride and handling. The car feels buttoned-down and composed unlike the busier Volvo. Bumps are soaked up completely, keeping the body and driver perfectly smooth. Handling doesn't suffer, either. Body lean is limited and the front end has very sharp turn-in. The steering makes it possible to take full advantage of this cool cat with incredible precision and decent feedback. It's a car that's easy to place and doesn't do anything unexpected. It rewards accurate deliberate inputs and makes it easy, too. It maybe doesn't feel as frisky as the Volvo, but it feels more capable, and much more in tune with the driver's inputs. 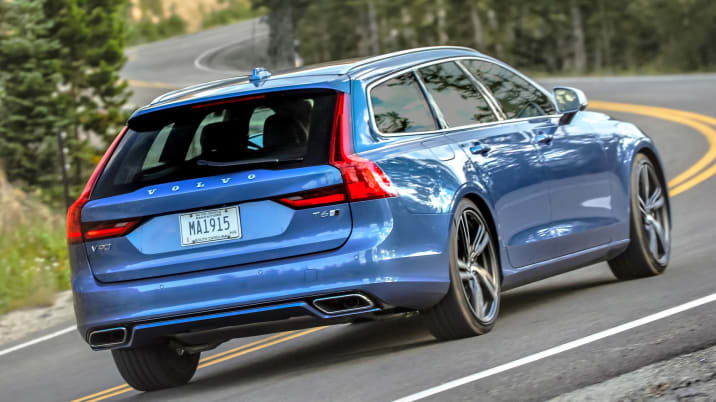 In the end, it's hard to say one of these cars is better than the other. And we know that sounds like a cop-out, but the fact of the matter is that they excel in different areas. The Volvo is the unabashed value leader, and every model has a nicer, more luxurious interior. The Jaguar, on the other hand, dominates in the driving experience, providing strong acceleration, excellent handling, and a supple ride that make it the sports car of the pair. So it comes down to what you value. If you want something that has the look and feel of a luxury car with a dash of sportiness, buy the Volvo. If you want something that's a sports car with lots of cargo space, buy the Jaguar. 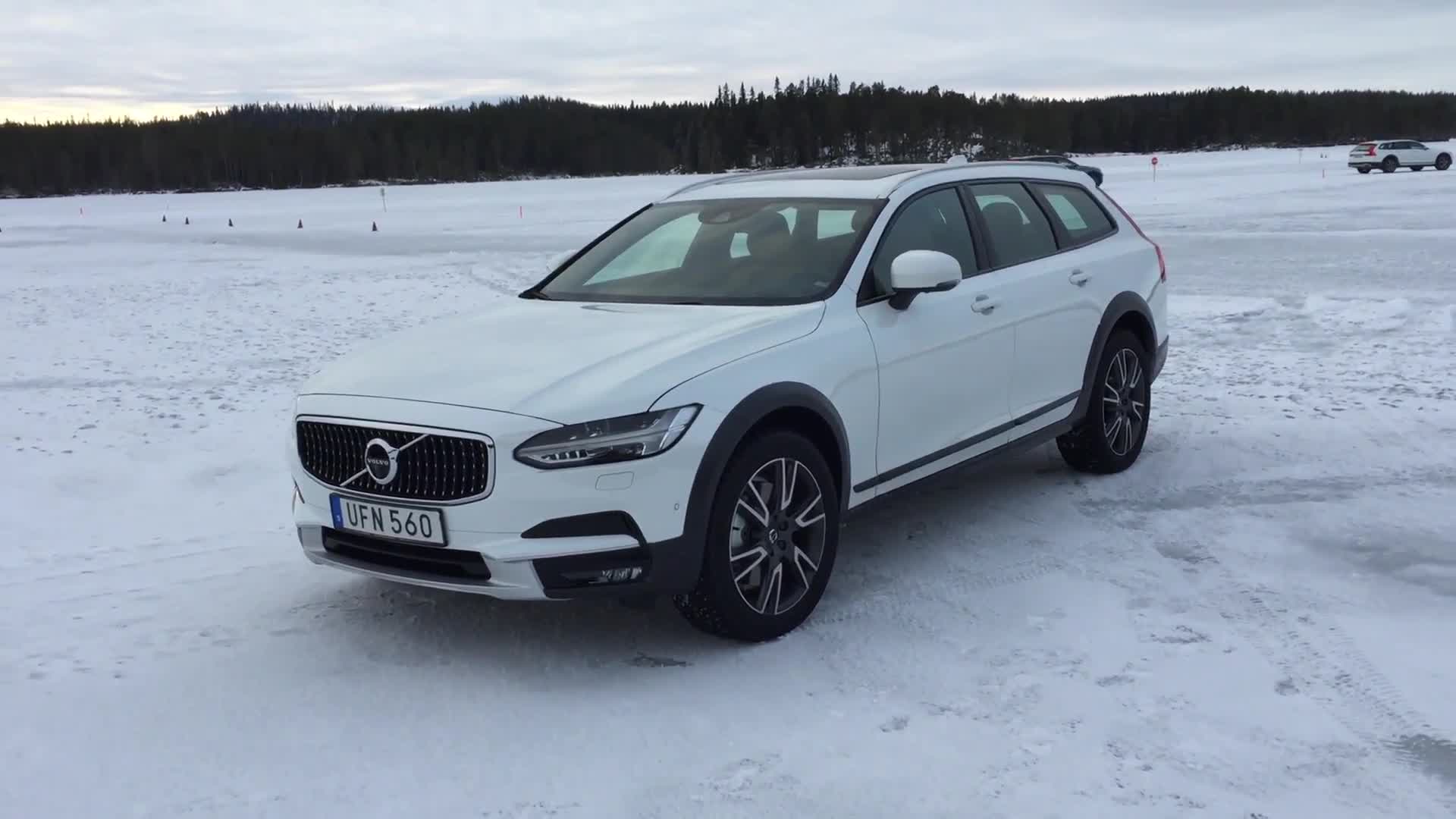