2019 Toyota Avalon vs. full-size sedans: How they compare on paper

James Riswick
Full-size sedans aren't exactly in great demand at the moment, and at least one of the vehicles in this comparison has been rumored to be on the endangered species list. Yet, we've just had our first drive in the 2019 Toyota Avalon, and if anything has a chance of rejuvenating the segment a bit, it's an all-new version of what has long been the segment's benchmark.

To see how the new Avalon compares, we've put together the below spreadsheet featuring the Avalon's primary apples-to-apples rivals, the Buick LaCrosse and Chevy Impala. We also included the Nissan Maxima, which is comparable in price, sales and non-luxury badge, and which offers the sort of increased driver engagement promised by the new Avalon XSE and Touring trim levels. We also included the outgoing Avalon for reference as well as that car's luxury cousin, the Lexus ES, which can definitely be cross-shopped with the luxuriously trimmed Avalon Limited. You can use our Compare Cars tool to create your own comparison, such as one featuring the rear-wheel-drive Chrysler 300, Dodge Charger or even Kia Stinger.

Alright, enough chit chat. On to the spreadsheet. 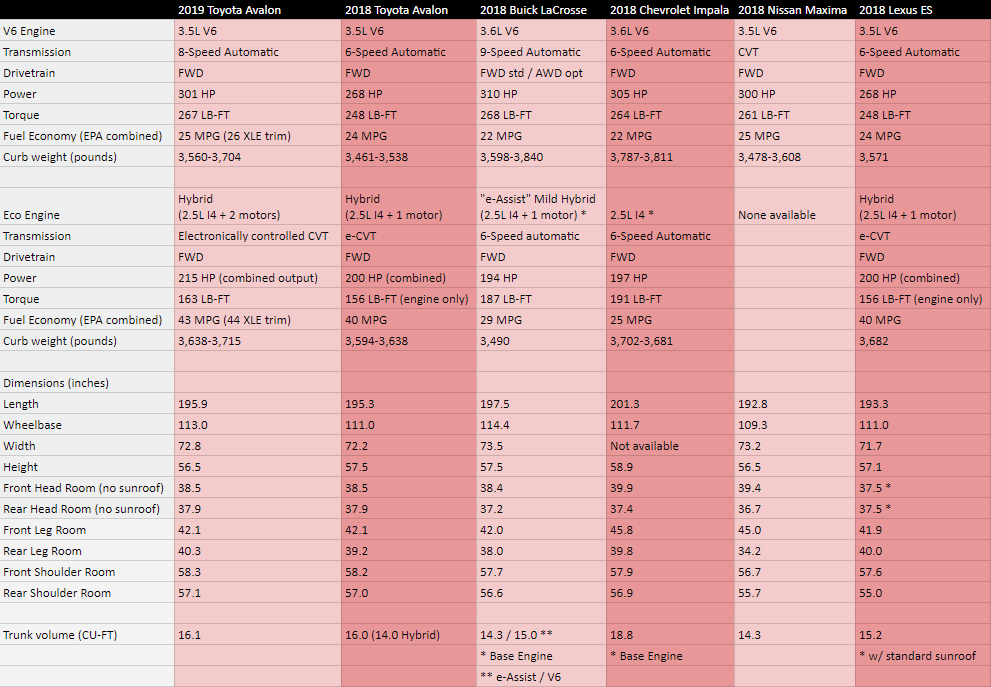 The GM sedans may come standard with four cylinders, including a mild hybrid system in the LaCrosse, but puh-lease. The V6 is the name of the game in this segment, with outputs now surpassing the 300-horsepower mark. The LaCrosse is the horsepower and torque champ, though it also weighs a bit more than the new 2019 Avalon, so acceleration is likely to be comparable. The Impala weighs a lot more and has only a six-speed automatic, so despite having a wee bit more power, one should expect it to be pokier (not a good sign for a car rumored to be on the chopping block). One would expect the Maxima's 300 hp and lowest curb weight to result in the quickest acceleration, but then it's also strapped to a CVT, which despite being better than ever, is still a CVT.

Things get worse for Chevy when you consider the Impala's base four-cylinder gets the same 25 mpg combined as the Avalon's V6 — once again a segment best. Now, should you really prioritize fuel economy, the 2019 Toyota Avalon Hybrid really stands out with a 43 mpg rating (or 44 with the base XLE trim) that bests the outgoing Avalon Hybrid. Honestly, after driving this new Hybrid, it actually seems like it would be the best bet for most buyers. There's sufficient power, and it only costs $1,000 more than the comparable V6 version. That could easily be paid back in fuel savings within two years. By comparison, the Buick LaCrosse's e-Assist mild hybrid really just provides a little extra oomph and mpg's to its four-cylinder to prevent the sort of weak-sauce situation on display with the base Impala.

Take a look for yourself.

The new Avalon has the longest wheelbase of this group, so it shouldn't come as a surprise that it also has the most backseat room. Having actually sat back there, we can certainly report that there's tons of legroom, though is it appreciably more than its competitors? Not really. Despite what the specs might say, headroom may be a bit tight in the back of the Avalon for taller folks, but then the LaCrosse and ES get around this a bit by lowering the seat bottom to a somewhat uncomfortable degree. The Maxima is, not surprisingly, the big loser here because it's not a full-size sedan. It's here because it competes with the Avalon in terms of performance, interior quality, price and badge, not size.

One note: We've only included the headroom figures (minus the ES) without a sunroof since GM doesn't provide specs with a sunroof. That would be a lower number.

In terms of trunk space, only the Impala offers something appreciably better than that of a midsize sedan. It's also important to note that the 2019 Avalon Hybrid has the same trunk volume as the V6-powered version since the battery pack has been relocated to underneath the back seat from under the trunk floor. Yet another reason to seriously consider the hybrid. 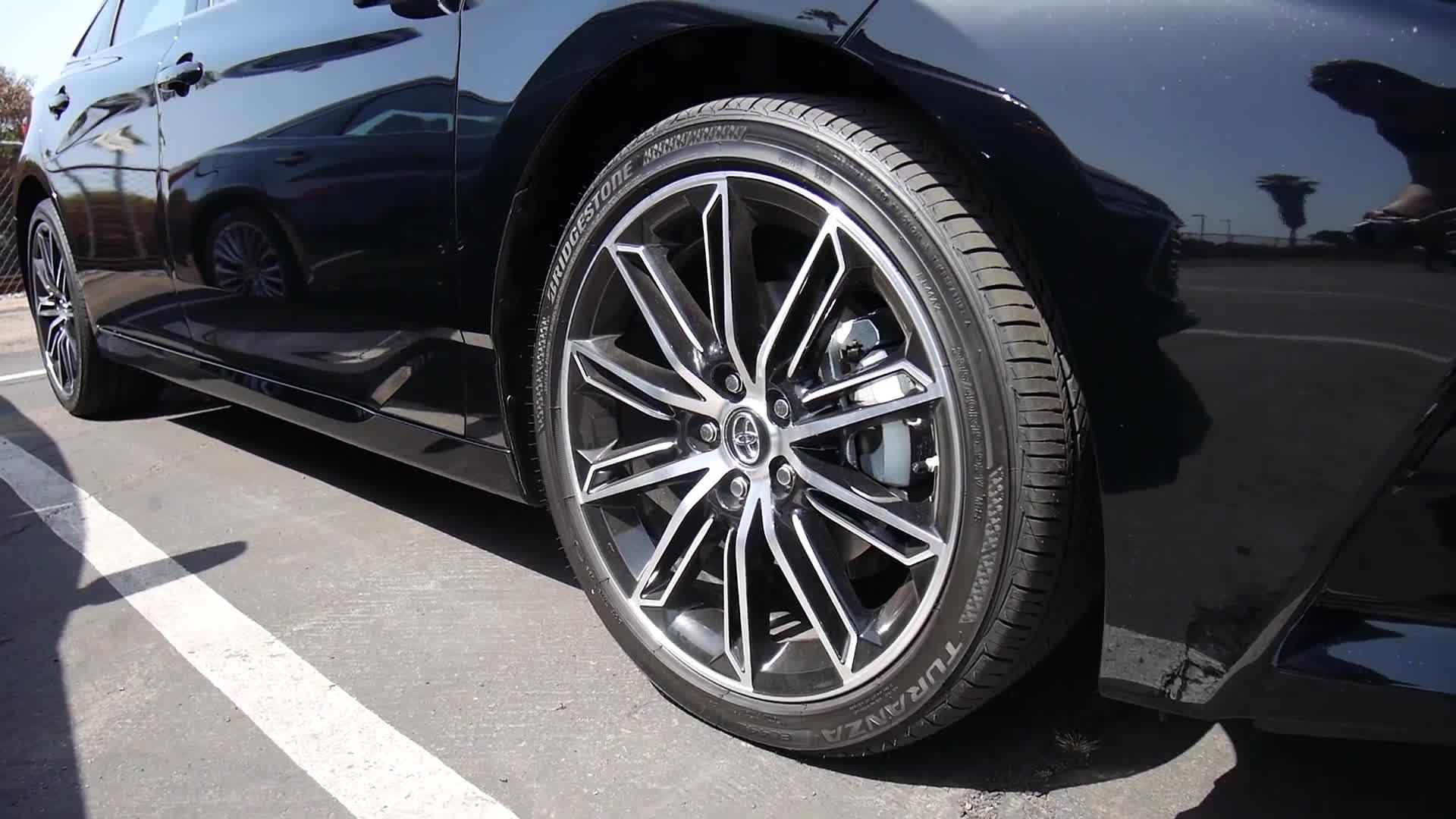