2018 Mazda6 Grand Touring vs. other midsize sedans: How they compare on paper

A battle of the high-horsepower family haulers

Joel Stocksdale
For the first time since this generation of Mazda6 was introduced, Mazda is offering the 6 with a more powerful optional engine. It's a 2.5-liter turbocharged four-cylinder available on the three highest trims: Grand Touring, Grand Touring Reserve and Signature. This new engine offering means Mazda can more directly compete with the rest of the midsize family sedan market, the vast majority of which have at least two engine options, if not more. So we decided it was a good time to see just how well the turbo Mazda6 is matching up with the established set. Because of the size of the segment, we restricted it to segment bestsellers and staples, the Honda Accord and Toyota Camry, as well as the bestsellers from American and South Korean companies, the Ford Fusion and the Hyundai Sonata. As always, these are simply comparisons of specifications and statistics, and for additional nuances, be sure to check out our in-depth reviews on these cars. And if you'd like to compare any or all of these cars with other vehicles in the segments, be sure to try out our car comparison tool. Now, onto the numbers. 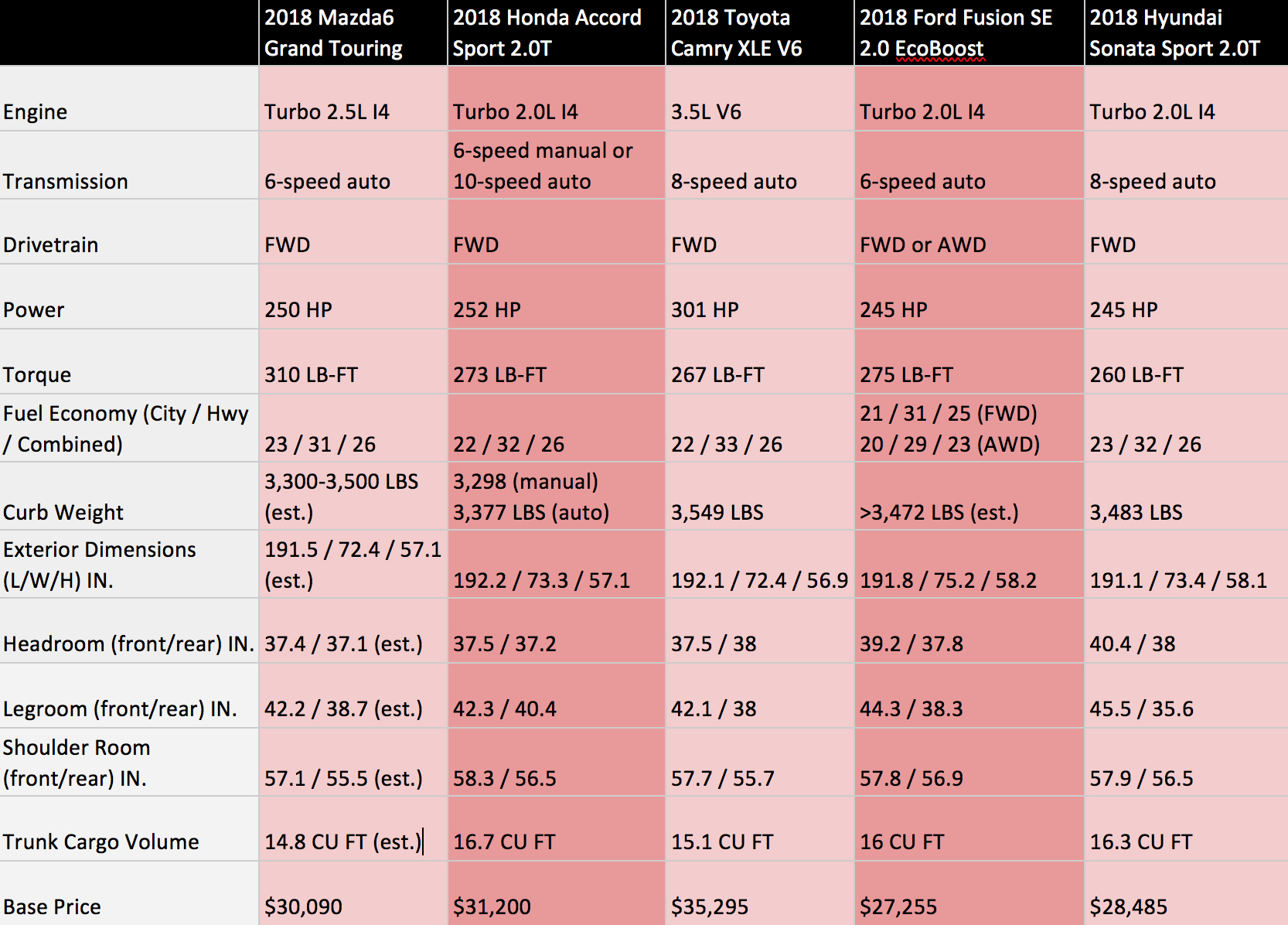 With the exception of the Toyota Camry, every high-horsepower family sedan here relies on turbocharged four-cylinder power. And of those turbo four-cylinders, only the Mazda displaces 2.5 liters while the rest make do with 2 liters. There are clear horsepower and torque winners, too. The Camry's 301 horsepower eclipses the rest of the segment by roughly 50 horsepower, and the Mazda6's 310 pound-feet of torque out-twists the next-most-torquey Ford Fusion by 35 pound-feet. Only one car in this group is available with a manual transmission, though, and that's the Honda Accord. The Ford also has an ace in the form of optional all-wheel-drive. Fuel economy is an incredibly tight race, with all but the Fusion managing 26 mpg combined. The Mazda6 and Hyundai Sonata win in the city with 23 mpg, and the Camry's 33 mpg on the highway wins that category. The Ford Fusion is worse in every fuel economy category. Before digging into the size of these vehicles, we need to point out that the dimensions for the Mazda6 are estimates using the 2017.5 model, since exact specs for dimensions are unavailable for the 2018 model at the time of publishing. Considering the fact that the 2018 update that introduced the turbo engine is a mild refresh consisting mostly of updated fascias, restyled dashboard, and more insulation, we don't think the dimensions will change much. Also of note is the curb weight of the Mazda and the Ford Fusion. With the Mazda, we expect the turbocharged model will be heavier than the naturally aspirated 2017.5. With the Ford, the company only lists weight for the 2.5-liter naturally aspirated engine. We suspect the turbocharged engine weighs more. In the all-important realm of price, the Ford and the Hyundai are the clear winners. The Fusion is the cheapest with a base price just over $27,000, and the Hyundai is close behind with a base price just over $28,000. Adding all-wheel-drive to the Fusion adds $2,000, but that would still keep it one of the cheapest in this group. The Mazda and Honda are very close between $30,000 and $31,000. The Camry is a pricey prospect at a whopping $35,000 and change. That's about $8,000 more than the cheapest Fusion in this group.