Honda really is back.

Reese Counts
3 Reviews
BRETTON WOODS, N.H. - Despite the badge, few vehicles feel as wholly American as the Honda Accord. Since 1982, Honda's self-described flagship has been built in Ohio, not too far from the U.S. auto manufacturing Mecca that is Detroit. The car was embraced by Americans for its practicality and reliability. We've bought more than 13 million over nearly 40 years on the market. Crossovers may be moving, but the Accord sells more cars every year than all of Dodge, Mazda and Volkswagen. Still, despite strong sales, something has been missing from Hondas in the past few years.

From the moment the cover was pulled off this new model, there's been quite a stir from Honda enthusiasts. What seemed to cause the greatest fuss was the move to an entirely turbocharged lineup. The days of high-revving naturally aspirated Honda engines is nearly gone, replaced by turbocharged engines with lots of torque and less stratospheric redlines. Pitchforks were raised over the loss of the V6. Some people seem to have given up on Honda. Those kneejerk reactions were all misplaced. This is the best Accord Honda has ever built.

The 2018 Accord is available with either a 1.5-liter turbocharged inline-four making 192 horsepower and 192 pound-feet of torque or a 2.0-liter turbocharged inline-four making 252 horsepower and a very un-Honda 273 pound-feet of torque. The latter replaces the 3.5-liter V6 that's been in Hondas for more than 20 years. It's based off of and built alongside the 2.0-liter turbo engine found in the new Honda Civic Type R. These two turbocharged engines don't feel like Hondas of old, with sky-high redlines and anemic low-end power. If anything, these torquey engines lose some steam up top. Still even the base engine feels more than adequate in most situations. 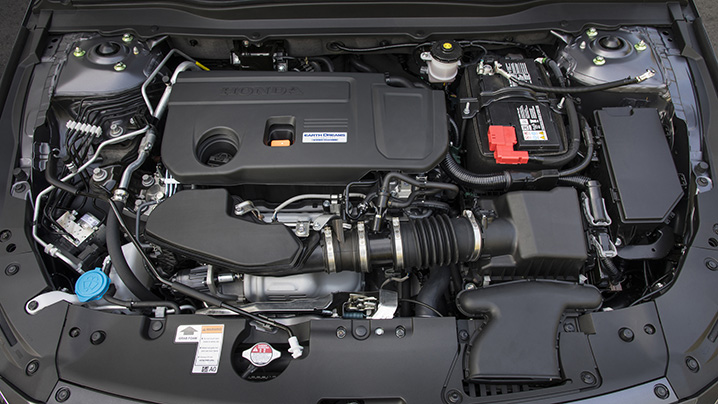 The 1.5T comes paired with one of the best CVTs around. It doesn't have the loose, band-like power delivery of other CVTs. The 2.0T cars come with an all-new 10-speed automatic that's light-years better than the old six-speed automatic in the old model or the nine-speed auto in some other Hondas and Acuras. It acts like a short-ratio six-speed with four long overdrive gears. It doesn't feel busy or confused like some other transmissions with similar gear counts. Mostly, it's forgettable in a good way.

A manual transmission is available on the Sport trim with both engines, something Honda should be commended for. The Accord Sport 2.0T with the manual is a genuine blast to drive. The shifter is short and precise, though not quite as slick as the one on the Civic. The pedals are placed perfectly for heel-toe shifting, and the entire driving position makes moving from the wheel to the shifter quick and easy. Honda really nails it with the seating and steering position.

The new Accord rides and handles well too, especially with the Touring model's adaptive dampers. The ride is a little firm with the larger wheels, but it's not terrible. I'd like to get it back home on Michigan roads to really see how it handles rough pavement. For the most part, it soaks up bumps and cracks with grace, sending muted vibrations to let you know what the wheels and suspension are up to. Even the fixed suspension is better than the last Accord. The steering is fine, but nothing to write home about. It's numb but has good weight. Really, it's only as good as it needs to be and isn't so devoid of life that it sucks out some fun. 
This is the best-looking Honda since the S2000. Pictures don't do this car half the justice it deserves. It's a sort of grown-up version of the design found on the current Civic, dropping all of the faux intakes and vents and smoothing out the edges. It's both wider and lower than before, though it's slightly shorter than the outgoing model. The wheelbase is up 2.1 inches, helping both rear-seat legroom and the overall proportions. Shorter overhangs give it a sporty stance, and the sloping roofline reminded a number of us of the Audi A7. The wheels are some of the best on any Honda in years.

The interior, like every Honda, is an exercise in both refinement and usability. No one does interior packaging quite as well as Honda. The overall design is simple, clean and open. It's far less claustrophobic than the Toyota Camry or Ford Fusion. All of the materials feel premium for a car in this segment. The fake wood trim on the Touring models looks particularly good, though the plastic accents on the lower-spec models are nice, too. Most of the buttons and switches have a nice mechanical click when you use them. The new steering wheel is a joy to hold, with smooth grooves for your thumbs and easy-to-reach paddles for the shifter. It feels just the right diameter for a car like this.

There's a deep center console large enough to hold two Big Gulps and my wife's Yorkshire Terrier. Higher-trim models have a wireless charging pad. I wish there were more than two USB ports. Everyone seems to have more than one or two devices on hand, so it's disappointing that Honda didn't include at least a couple more ports. 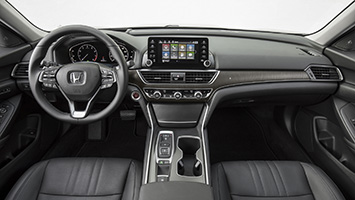 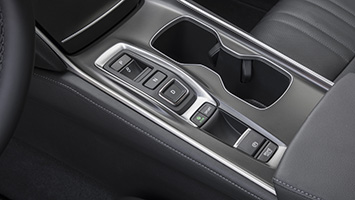 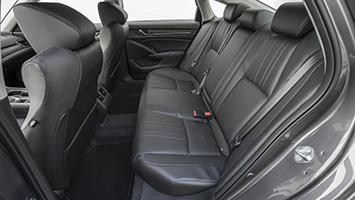 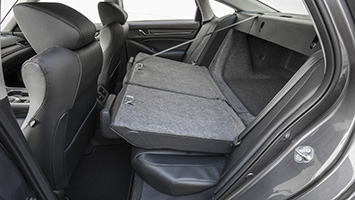 The digital instrument cluster and heads-up display are far more clean and crisp than what you'll find on luxury cars twice this price. The Accord uses a traditional analog speedometer on the right and a digital display on the left that can rotate between the tachometer, trip readings, navigation, radio and active safety readouts. Many of these same functions can be pulled up in the HUD as well.

The Accord now has the updated infotainment system from the new Odyssey. After years of dual screens and touch-capacitive inputs, Honda has simplified things with a single screen with two large knobs and an array of buttons. Sure, it doesn't look as clean as a slick piece of glass or plastic, but it's far, far easier to use. I'll take that over a frustrating and fingerprint prone interface any day. The system itself is clean and responds quickly to inputs. Most people just want their cars to be as easy as their phones, so Android Auto and Apple CarPlay are available.

For 2018, the HondaSensing active safety suite is standard on all Accords. This means every model gets automatic cruise control with low-speed follow, automatic emergency braking, lane-keep assist and traffic-sign recognition. EX models and above get blind-spot monitoring and rear cross-traffic alert while top-level Touring models get front and rear parking sensors. The automatic cruise control and lane-keep assist work well, not leaving a huge gap between cars like some earlier systems. 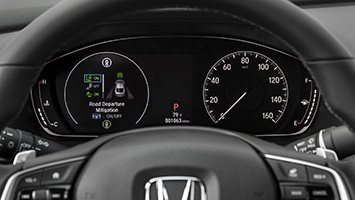 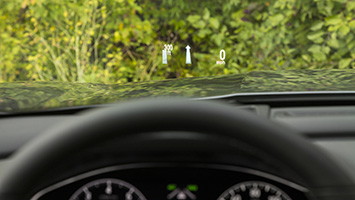 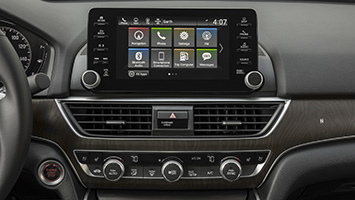 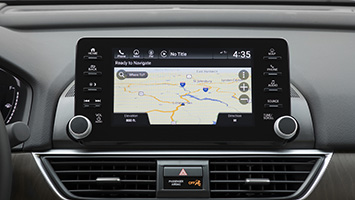 The Accord 1.5T comes in five trim levels, LX, Sport, EX, EX-L and Touring. The 2.0T models come in Sport, EX-L and Touring. This is the first time the Accord Touring trim has been offered with the base engine, meaning you can get all the features and equipment without having to pay the penalty with fuel efficiency. All Accords come with LED lighting, dual-zone climate control, keyless ignition and Bluetooth audio. Stepping up through the trims nets you options like power seats, a moonroof and navigation. Touring models get a heads-up display, adaptive dampers, wireless charging and ventilated front leather seats.

A hybrid model is coming next year. An early prototype was on hand to test. The big news with the Accord Hybrid is the downsized battery. The smaller battery now rests under the rear seats, meaning cargo room is no longer compromised by a big lump in the middle. All Accords have the same cargo and interior space. 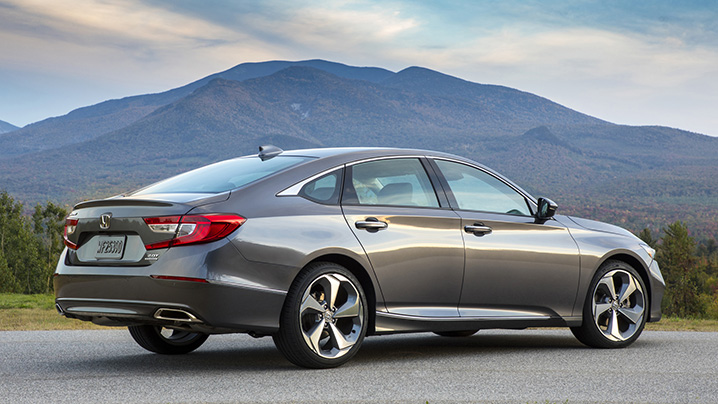 There's no doubt that this is the best-looking and best-driving Accord that Honda has ever produced. Sure, the new engines mean the car doesn't quite have the same character as older models, but it's just different, not bad. Front to back, this car is really something special. It's not only better than the last Accord, it's as good or better than everything else in the class. There's not one fundamental flaw or glaring issue that Honda left in. All of the criticisms of the past few years about complacency and a lost focus seem to have been addressed.

The new Toyota Camry is a truly great car, and one that's fun to drive for the first time in decades. It offers more power from its V6, but there's no manual available on any trim. The same goes for the Ford Fusion. Those might be better options if you really care about straight-line performance. Both were on hand to drive and, after a back to back comparison, don't feel nearly as well rounded as the Accord. The Camry comes close, and for some, the details might lead you towards Toyota. I'll stick with the Honda. 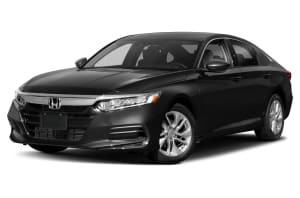