2019 Jeep Cherokee vs. other compact SUVs: How it compares on paper

Joel Stocksdale
Though the 2019 Jeep Cherokee hasn't changed all that much, it does get a new engine option: a 2.0-liter turbocharged four-cylinder. It's now the range-topping engine, boasting 270 horsepower (just 1 hp less than the still-available naturally aspirated 3.2-liter V6) and 295 pound-feet of torque (up 56 on the V6). The addition also means the Cherokee has a new weapon in a freshened body for challenging those compact crossovers that offer a high-output turbocharged engine.

As such, we wanted to see how it compares on paper to those competitors: 2018 Chevrolet Equinox, 2018 Ford Escape Titanium, 2018 GMC Terrain, 2018 Kia Sportage and 2018 Subaru Forester. The specs are below, followed by an in-depth breakdown of the stats.

> Discover and compare small crossovers with our Car Finder and Compare tools. 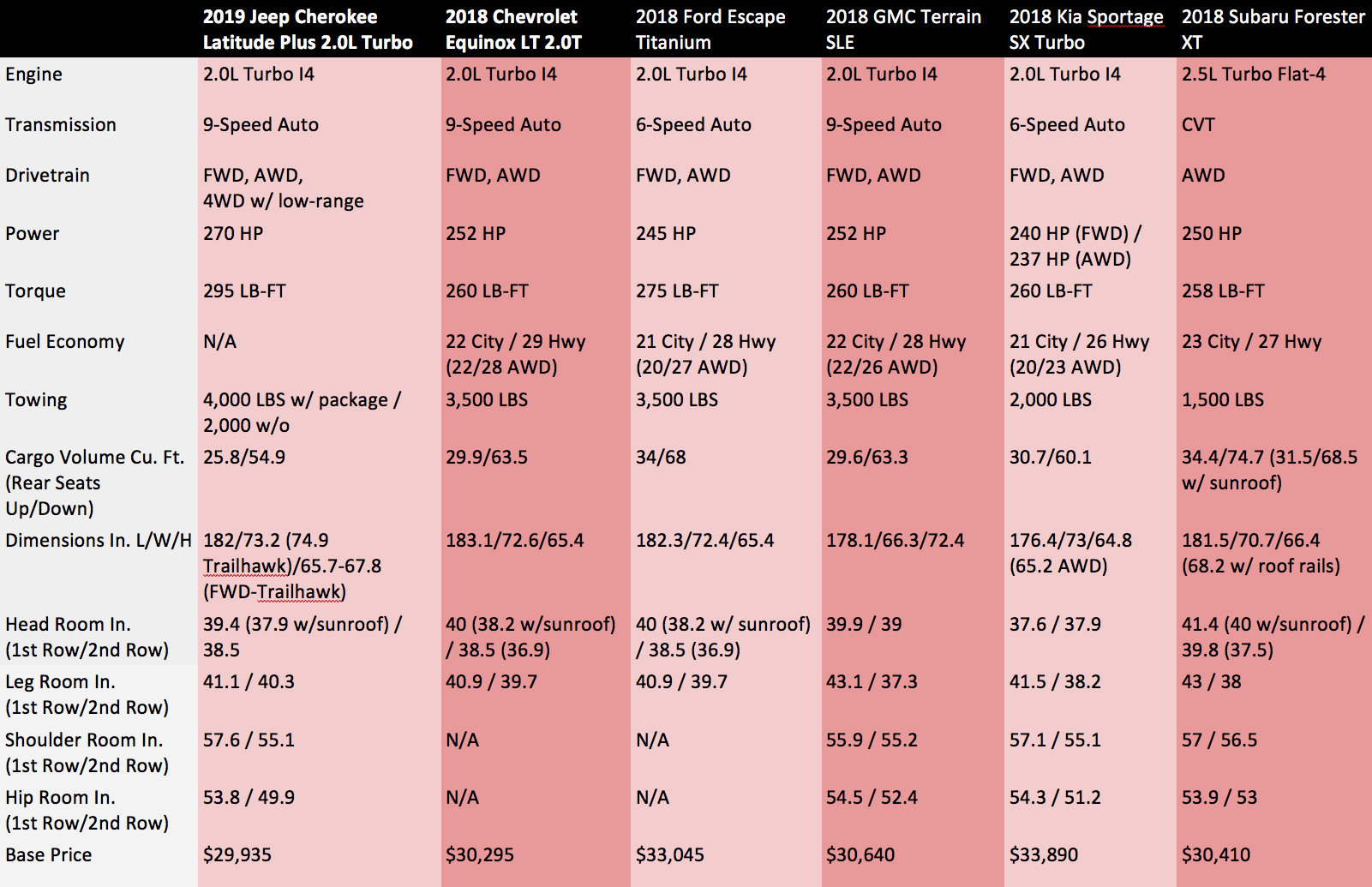 Immediately apparent is the fact that the Jeep Cherokee has the most grunt of the group. It has 18 hp more than the next most powerful Equinox and Terrain with their 252-hp 2.0-liter turbocharged engines, and 33 more than the 237-hp all-wheel-drive Kia Sportage SX Turbo. The Cherokee's 295 lb-ft also has a 20 lb-ft advantage over the next twist-happy competitor, the Escape Titanium with 275 lb-ft. It especially outdoes the Forester XT, the least torquey option at 258 pound-feet. The Cherokee's nine-speed automatic is matched by the Equinox and Terrain. The Escape and Sportage settle for six cogs, and the Subaru ditches gears altogether for a CVT. The Cherokee offers the most ways to send power to the wheels with front-drive, single-speed all-wheel-drive, and a four-wheel-drive system with low-range. The latter can be fitted with a locking rear differential in the Trailhawk for serious off-roading. The Chevy, GMC, Ford and Kia are all available with either front- or all-wheel-drive, while the Subaru is only available with all-wheel-drive.

The Cherokee scores another win in the towing category. It has the highest maximum towing capacity at 4,000 pounds with the towing package. Not too far behind are the Equinox, Escape and Terrain, which each can tow 3,500 pounds. Bringing up the rear is the Subaru Forester at just 1,500 pounds. The Kia matches a Cherokee without the towing package at 2,000 pounds of towing ability. But when it comes to interior cargo space, the rankings shift.

The Subaru walks away with the volume award, so long as it doesn't have a sunroof. Its 34.4 cubic feet behind the rear seats and 74.7 with the seats folded gives it 0.4 and 6.7 more cubic feet in each respective category than the next-most-capacious Ford Escape. Add the Forester's enormous optional sunroof, and the Escape creeps ahead behind the rear seat, but is still slightly smaller than the Forester's capacity with the seats down. We can compare the Cherokee's base price to the others, though, and there it has a nice advantage. The turbo engine is available on the second-lowest Latitude Plus trim and with front-drive, so it can be had as low as $29,935. Adding a four-wheel-drive system bumps up that price by $1,500. Next lowest is the Equinox at $30,295, also a front-drive version. The cheapest way to get four driven wheels is to go with the Subaru Forester. It has standard all-wheel drive and has the third-lowest base price of $30,410. The priciest of the bunch is the Kia Sportage with a base price of $33,890.