Lighter, with a smidge more power – but exclusivity and specialness in spades. PALM SPRINGS, Calif. — Last year, Subaru set a record for the fastest sedan lap at the 'Ring in a race-spec STI Type RA, which completed nearly 13 miles in less than seven minutes. The new 2018 Subaru WRX STI Type RA is inspired by that record-breaker (and those before it), and it will finally come to the United States as a special edition limited to just 500 units. We traveled out to the California desert to test it on mountain roads, as well as a recently built private race track at the Thermal Club.


Subaru built its first "Record Attempt" (that's what the RA stands for) vehicle in 1988, a Subaru Legacy that drove more than 62,000 miles over 18 days at an FIA track in Phoenix. Since then, Subaru has introduced a number of WRX/STI Type RA models, with several attempts to set record laps at the Nürburgring. While Japanese customers got the opportunity to buy consumer versions of the Type RA, fans in the United States never did.

Until now. The nameplate finally comes to the rest of us, improving upon an already potent, all-wheel-drive performance sedan for the everyman. The STI already offers 305 horsepower, a forgiving torque vectoring system, and that big, beautiful wing to set it apart. The Type RA takes this even further, providing more refined performance from a familiar package. The cars are currently being built, and will arrive in dealerships soon. 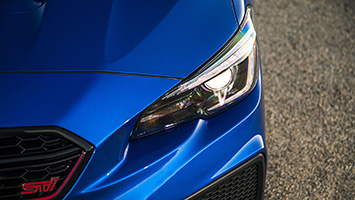 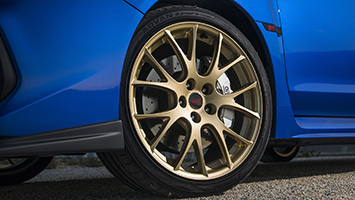 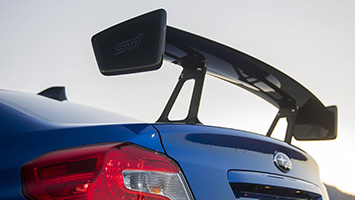 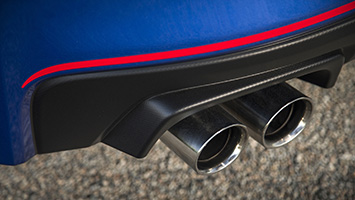 
Compared to the standard STI, the Type RA is about 68 pounds lighter thanks to a carbon roof and rear wing, BBS 19-inch forged aluminum alloy wheels, the deletion of the rear armrest and swapping of the spare for a tire repair kit. The lighter roof also helps to lower the center of gravity by a fraction of an inch. Other exterior changes include signature STI Cherry Blossom Red highlights on the grille and rear bumper, a front spoiler, black mirrors and Type RA badging. It only comes in three paint colors: WR Blue Pearl, Crystal Black Silica and Crystal White Pearl. Inside, it gets an ultrasuede steering wheel, short-throw shifter, red push-button ignition and a serialized plate to indicate its rarity.

Under the hood, the Type RA benefits from strengthened pistons and sodium-filled exhaust valves that better withstand high temperatures, which is important as the number of laps ticks higher on track day. It gets revised ECU tuning, and lower-restriction air intake and exhaust. Finally, it has a 4.5 percent lower third gear ratio. In terms of power, the boost in output is modest — just 5 hp. That and the revised third gear help the Type RA do 0-60 mph about a tenth of a second quicker. 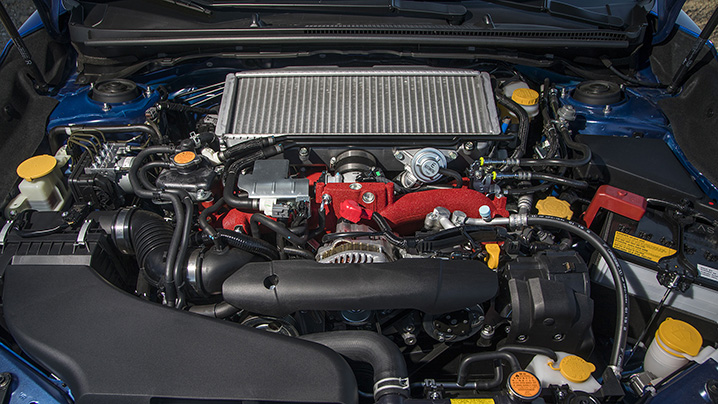 If you can't live with the regular STI's downfalls this car isn't going to convince you. This limited edition doesn't fix any current complaints about the car, it just improves slightly on the car's strengths, brightening and polishing those aspects that attracted the car's current and past owners. Pushing $50,000, the interior still doesn't have the premium feel you'd expect from that price tag. There's still a lot of road noise. Sixth gear still needs to be a lot taller before it'll be comfortable for long highway hauls. But highway hauls aren't what the Type RA is about.

Faster lap times are more the Type RA's thing. In Subaru's tests, pro racer David Higgins was able to run Virginia International Raceway's Grand West Course 4 seconds quicker than in the standard 2018 STI. Perhaps most importantly, though, the Type RA provides die-hard fans the chance to own something they'll find special — something previously admired from afar, reserved for the Japanese home market, offered in the United States for the first time ever. 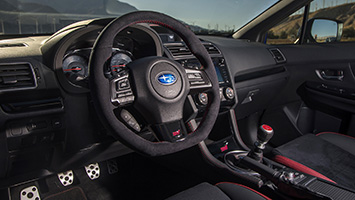 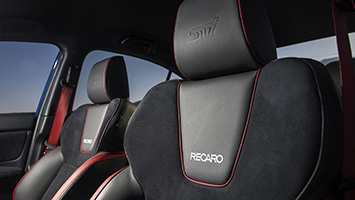 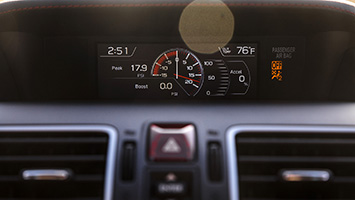 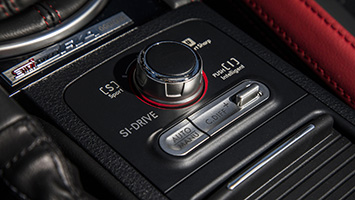 
Your author still owns a 2004 WRX, and has maintained a familiarity with the subsequent generations of the WRX and STI. These cars have evolved in such a way that there's a certain intimacy — the placement of certain controls, the feel of the pedals and steering wheel, the way the car reacts to driver inputs, the way its weight shifts — that it always feels like home. The same is true for the Type RA, albeit slightly evolved.

Our drive took us into the mountains above Palm Springs before heading out to the Thermal Club. The tug of this turbo boxer performs as reliably and effortlessly as it always has in uphill climbs, offering just a bit more muscle at 310 hp. Shifts are quick and precise, almost automatic hand gestures, with the short-throw shifter swapping deftly and palpably from one gear to the next without a risk of fumbling through them. Just like the regular STI, it's a hoot to push the motor near the top of the rev range as you accelerate and brake on undulating, curvy roads.

And boy, those curves. Even hemmed in by the steep ledges lining the narrow roads, which we shared with other cars, semis and cyclists alike, the Type RA's subtle differences and unflappable grip became apparent. The STI usually feels kind of heavy, a sense that you're reluctantly overcoming inertia, but the Type RA feels lighter, flitting from left to right and back. Nail the rhythm, with that lightness perfectly meshing with steering precision and deft handling, and it's a bit like dancing. The Bilstein setup is definitely a worthwhile improvement, even for this sort of casual(-ish) driving.

Cruising the up and down a stretch of mountain roads, getting a feel for the STI Type RA's temperament, was a nice warmup for what would come next. 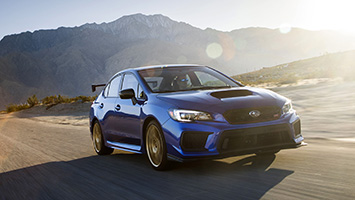 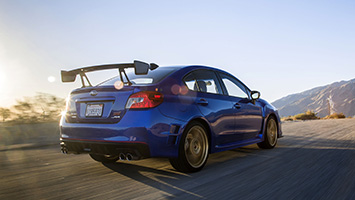 
After heading through town and a stretch of desert in a Subaru BRZ tS — the other limited edition Subie we drove that day — we arrived at the Thermal Club, a sort of desert oasis motorsport country club in Coachella Valley for the super wealthy. As the wind picked up, it threw clouds of grit across the pavement as we followed pro driver, brother to the aforementioned David, and guy who turned an STI into a bobsled, Mark Higgins, for a sight lap around the course. It's a smooth track with not a lot of elevation change, but a couple tricky, tight corners to watch out for.

After that single lead-follow lap, we were off, revving the 2.5-liter boxer to its limit before shedding speed quickly with the Brembo performance brakes. Aiming the Type RA into a corner with as much hot sauce behind it as we could muster, we explored the car's limits much better than we could on a public road. With the SI-Drive in Sport Sharp, the standard Yokohama Advan Sport tires shouted as they struggled to hang onto the pavement as we pushed it through corner after corner. Subaru seems to have sacrificed an opportunity for even greater track performance for daily utility here, choosing rubber that will hold up in wet conditions, too (though we'll have to save that test for a later date).

The STI is super fast, and fairly weighty at 3,395 pounds, so it takes a bit more skill to make it around the track. But it has the twin qualities of the best trackable cars: it's forgiving of your mistakes, and it communicates its limitations well. You can feel where the weight of the car wants to go, and how that momentum corresponds to remaining grip levels. The car responds deftly to corrections in steering, showing a lot of poise even when you turn or get on the gas too early. Yeah, you'll still find the next guy catching up to you in your rear-view mirror if you're at all sloppy, but you'll still be on your racing line and not off in the gravel — or worse. Even as the desert sand blew across our path, we had a lot of confidence in the Type RA. 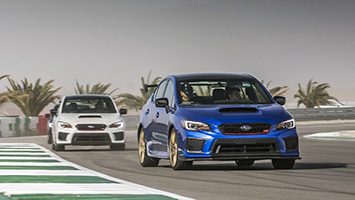 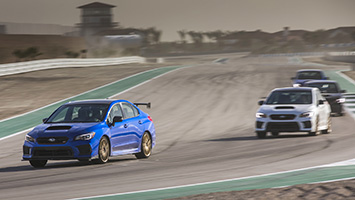 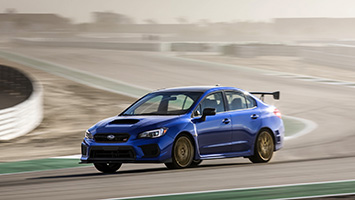 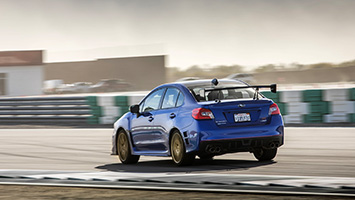 So, Is The Type RA Worth It?


At a starting MSRP of $49,855, a lot of customers will be repelled as soon as they see the sticker. The Type RA adds about $4,500 to the cost of an STI Limited with every STI cosmetic or performance box checked, which is a lot to ask to begin with. If you've already got the hankering and the means to check every box on an STI, that might seem reasonable for the stronger engine internals, improved handling, and most of all the lightweighting, which is hard to get from the aftermarket. The rest of us will make do with a lower trim level and some aftermarket parts. That said, there are no options to inflate the Type RA's price (apart from the odd accessories). It comes well equipped, with standard push-button start, 19-inch wheels, a 7.0-inch Starlink multimedia system, and Recaro front seats.

For the Subaru superfans, it's going to be an awesome addition to their stable, seeing as it's the first time they have the opportunity to buy the Type RA in the United States. Plus, it's a fun car to drive, if only slightly better than the standard version. Those willing to plop down the cash would probably love the car even if Subaru had beat it with the ugly stick, but they're the ones who will notice the subtle improvements in an already capable performance sedan, and whose hearts will swell just a bit every time they press that cherry red ignition button and spy that carbon wing in the rear-view mirror. The rest of the world will probably write the Type RA package off — fairly enough — as an overpriced gimmick.

And, after all, Subaru only needs to find 500 buyers from its adoring fan base who will — also fairly — find a lot to love in the little things that make the Type RA special.