A tale of bobsleighs, boffins, and several pints of British bitters.

Jeremy Korzeniewski
When asked how confident he felt of a successful full run down the St. Moritz-Celerina Olympic Bobrun in his specially prepared Subaru WRX STI, professional rally and stunt driver Mark Higgins responded, "50/50." In reality, he was probably being generous.

It wasn't supposed to be so death-defying. In fact, Subaru's original plan was to have Higgins make several runs down the icy slope, some with journalists in the passenger seat. We were among those who traveled all the way to Switzerland for the chance to experience an automotive bobsled ride. One look at the run's famous Horseshoe Corner was all it took for us to second-guess that idea. Well, that and our pesky sense of self preservation.

Higgins, though, is one of those rare humans to have been born without that fear-of-death gene. Not only is the Manx driver a professional stuntman – his resume includes sequences for Daniel Craig's James Bond – he also won the British Rally Championship three times and is the four-wheeled record holder at the famed Isle of Man Snaefell Mountain Course. So, when Higgins says some sort of vehicular stunt has only half a chance at success, well, let's just say that most mortals would say something more akin to "a snowball's chance in hell." 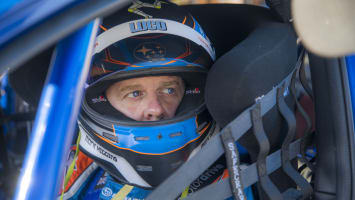 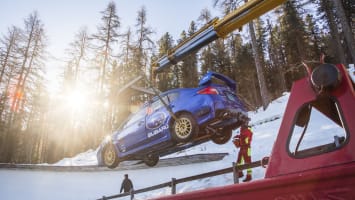 On the topic of snow and balls, it's worth noting that the timing of Subaru's bobsled run wasn't set by choice. The Olympic Bobrun hosts regular events every winter through late February or early March. Since the track at St. Moritz is the only run in the world without an artificial cooling system, warm weather means no sledding. Combine those two facts and you end up with a very narrow window in which Subaru could go about making the modified track and a WRX STI actually fit together. Enter the boffins at Prodrive.

The British engineering firm first started modifying vehicles for racing in 1984. By 1990, Prodrive was focused on turning turbocharged Imprezas into championship winners for the likes of Colin McRae, Richard Burns, and Petter Solberg. So it comes as little surprise that Subaru turned back to Prodrive to figure out how to modify a 2015 WRX STI in a way that would make it survive the pounding it would sustain on a bob run.

For the record, this isn't just any 2015 WRX STI. It's actually the same car Higgins used in 2014 to set a lap record at the Isle of Man. That particular record no longer stands – Higgins and Subaru set a time of 17 minutes, 35 seconds last year in a specially prepared 550-horsepower monster 'Rex – but saying that this car holds the second-fastest lap at Snaefell is nothing to sneeze at. After sitting mothballed for two years at a museum in New Jersey, Higgins' chariot was shipped back across the Atlantic so that Prodrive could get to work. A scant few weeks' worth of modifications include a full safety cage, springs and shocks stiffer than railway ties, and tires with 400 individual tungsten lugs apiece. 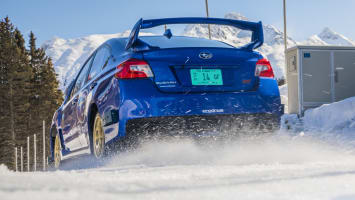 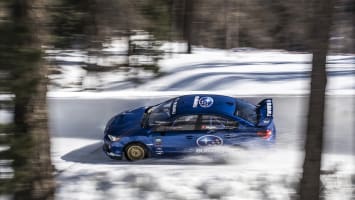 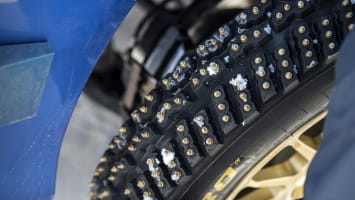 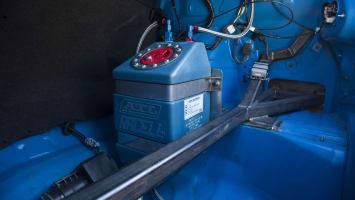 The STI's most obvious modification, though, consists of a steel latticework of buttresses and brackets that run around the car's lower perimeter and brace against the bodywork at all four corners. Large bumpers that were milled out of nylon blocks and attached to the framework through holes drilled in the sheetmetal were supposed to bear the brunt of damage to the beautiful blue WRX as it careened down the course, but that didn't really happen when reality and gravity combined forces and took over.

That's not to say that Prodrive's work was in vain. Far from it – Higgins walked away from the wreckage in one piece. And, after just a little bit of demangling that may or may not have involved a couple of well-placed booted kicks to the hood and fender, the semi-crushed Subaru was turned around and drove all the way back up to the top of the bob run for another photo op. Pay close attention to the after effects and you'll see damage that extends all the way to the A-pillars and roof. Good thing for that roll cage, and great driving from Higgins to somehow wrangle the WRX back onto its four studded tires. The video above gives you a good taste of what he experienced. 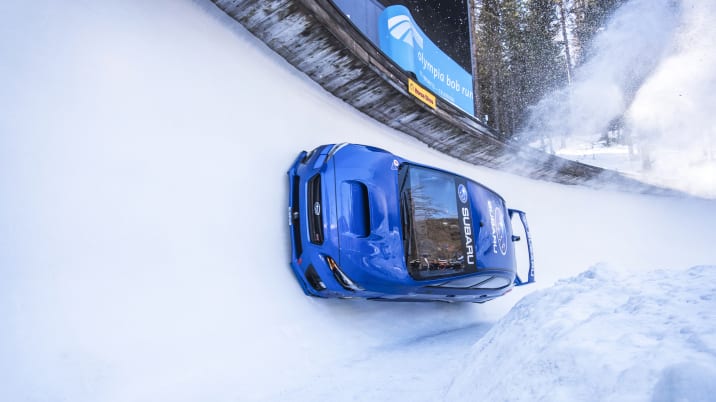 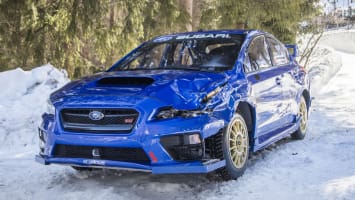 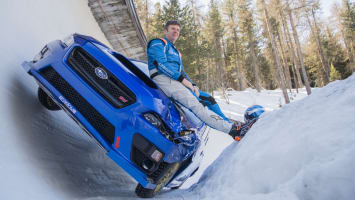 It was a crazy idea, and one that very nearly ended in disaster. But that seems rather fitting, considering how the sport of bobsledding was invented in the first place. According to local lore, the bobsleigh was invented in St. Moritz by some British chaps in the late 1800s who drank enough beer that the idea of welding some sleds together and sliding down a winding mountain pass sounded like jolly good fun.

Now, we're not going to suggest that autosledding is going to be the next Olympic sport (mostly because the smart money's on the X Games). But if it did, something tells us that Higgins would be the ringleader, Subaru would be his sponsor, and a cask or two of British bitters would be to blame. Oh, and after witnessing the spectacle firsthand, we'd also hazard a guess that ratings would be through the roof.

$764 - $1,149 Nat'l avg. savings off MSRP
See Local Pricing
I'm not in the market for a vehicle at this time. Please move this suggestion to the side for 30 days.
Huge Savings