Joel Stocksdale
Easily one of the weakest points of the current Jeep Wrangler (and most past ones for that matter) is the bleak, black plastic interior. Now, thanks to a pair of images from Jeep we get our first unobscured look at the new Wrangler's interior. And thanks to some retro cues, it's a much brighter and more cheerful place.

As expected from spy photos, the dashboard's main design features are simple, flat body-color panels positioned in front of the driver and passenger. They harken back to the painted metal dashboards of vintage Jeeps, and at the same time bring a splash of color and contrast to what would otherwise be a plain, average interior. In fact, it's the same strategy used by both the Fiat 500 and Volkswagen Beetle. There's more metal-finish trim around the switches that advance the bright look, too. The whole dash is flatter, with things like the grab handle mounted flusher. Everything has a more geometric, crisp shape, with each bank of buttons featuring beveled borders. 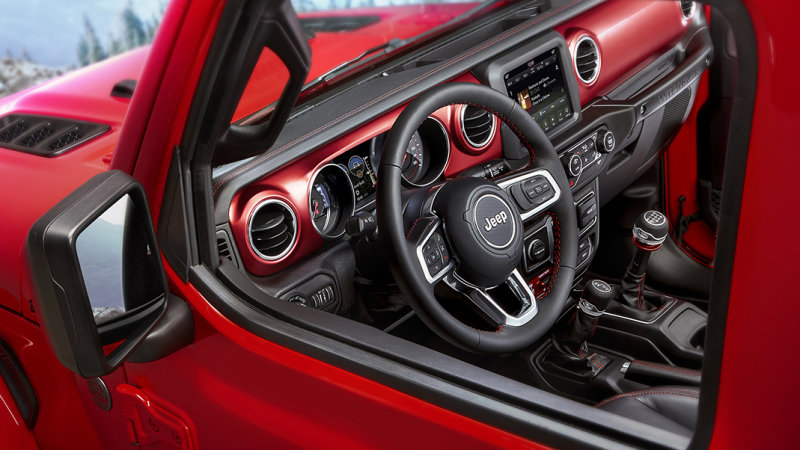 At the top of the dash is a big touch screen for infotainment. It's possible lower-trim levels will have head units with smaller screens and some more buttons, but at least on this model, it's all about the touchscreen. There are volume and tuning knobs lower, though. This is also where the various climate controls are found. The instrument panel gets a sharp-looking center screen, too, and the analog dials have been reduced from four large units down to two on either side of the screen.

Below the climate controls are the window switches, power outlet and media inputs. At the very bottom we find switches for off-road features, indicating that this is probably a Rubicon model. A switch to the left surrounded by red accenting controls the front and rear differential locks, and in the middle is a button for disconnecting the anti-roll bars for greater articulation. On the right are four generic buttons that seem like the auxiliary toggles in the F-150 Raptor, so they should be able to connect to lights, a winch, and other aftermarket accessories.

Jeep still hasn't revealed any other details on specifications or pricing. That information will be released on November 29 during the Wrangler's official reveal at the L.A. auto show. We expect it to only offer a V6 at launch with either a manual transmission (shown in the images) or an automatic, with the turbocharged four-cylinder engine coming later.