Meet the sledgehammer that flies.

Alex Kierstein
View All Specs
It's as if the Ford F-150 Raptor was born among the scrub and dust and cactus, emerging from the Anza-Borrego sand and shattering our expectations. Back in 2010, our review of the first Raptor confirmed what we all know now: hauling ass through the desert in a stock pickup is the greatest thing you can do with your clothes on. We're back in that same desert, east of San Diego, to see if the 2017 Ford F-150 Raptor can recapture the magic.

Yes, it can crawl – we managed to billy-goat it over some improbable terrain – but this is a wide-open-spaces truck. That's why we're in a place with room to run. Out here, the new Raptor requires you to hard-code a different set of limits into your protesting brain.

Say you're running next to some train tracks at 70 mph or so, and a ditch, perhaps a dry creek bed, appears before you. Your inner voice hisses at you – "Brake! BRAKE! Now, you IDIOT!" – as you brace against the dead pedal. You don't brake. Instead, when the exceedingly patient and calm right-seater, a pro instructor and Baja veteran, barks "gas NOW," you floor it. 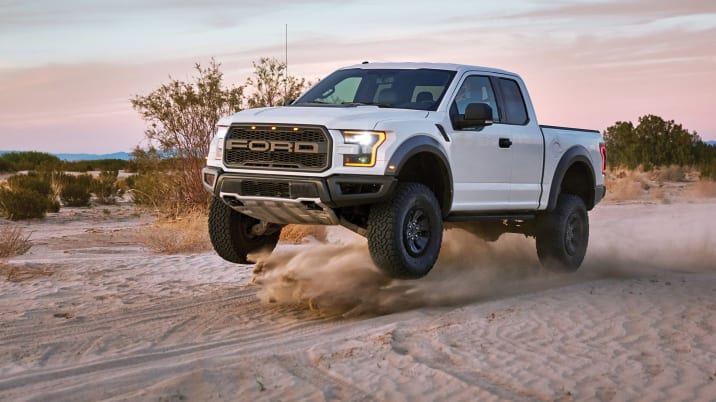 Unless you've been cutting up the desert on the regular, this isn't intuitive. But the right foot obeys. At this moment, thanks to throttle-on weight transfer, the unloaded wheels droop as the nine-stage Fox shocks extend like the landing gear they're about to become. Had you braked, they'd be compressed, and you'd hit the other side of the sandy chasm with much less than the full 13 inches of front and 13.9 inches of rear travel. And the landing isn't cushy, since your 5,500-pound truck came down at around 60 mph. But nothing breaks, which seems either miraculous or magical. And then you laugh, a hooting sound that nothing hears, because everything that can move on legs or wings has already fled the approach of the Raptor.

Clearly, this experience is intoxicating. Learning to fly a pickup exposes the broad swaths of greatness in this truck, expanses as wide as this scrub-covered basin that Ford engineers used to develop both generations of the Raptor. But there are hard, sharp things in the desert, and while the Raptor is fun, it isn't perfect.

Straddling the red rocks of this moonscape, the Raptor is a handsome thing. Its sheer width, accentuated by monumental flares and a track that's somehow six inches wider than its already chunky predecessor's, visually shrinks the wheelbase. A charge-air cooler is nestled behind the lower grille, flanked by bumper outriggers with central cutouts that serve as peepholes to reveal the sexy aluminum lower control arms and blue-and-silver shocks. Let the rear wheel hang off an obstacle to gain an equally sensual view of the rear setup. It's a hearty stew of off-road style. 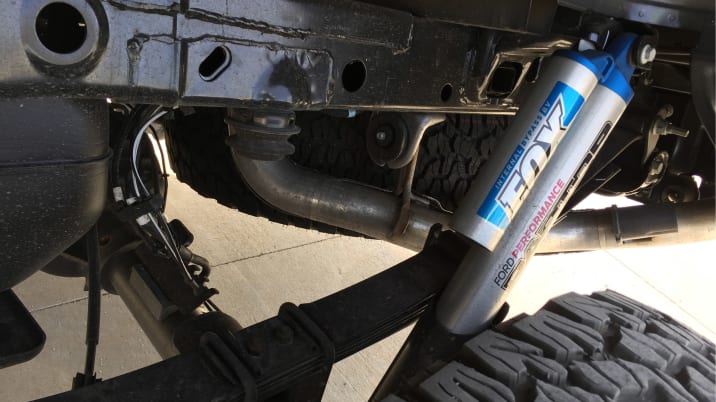 The tailgate's billboard-sized "FORD" script is distracting, but check out what's below. The vulnerable side-exit exhaust of the old Raptor has been replaced by a dual rear-exit exhaust system. It's nestled up into reliefs in the rear bumper, a happy marriage of practicality and tactical street aesthetic. The brickish taillights seem like an homage to those '80s F-150s and their normcore blockiness.

The interior of the Raptor is virtually identical to those of its lesser F-150 brethren, teetotalingly sober but with one neat exception. The original Raptor had a row of auxiliary toggle switches forward of the shift lever. Cool, but that's not where Raptor owners want those switches. The 2017 truck moves them to the overhead console for full fighter-pilot effect. No matter how cool your LED light bar is, the switches that come with it don't look this good. 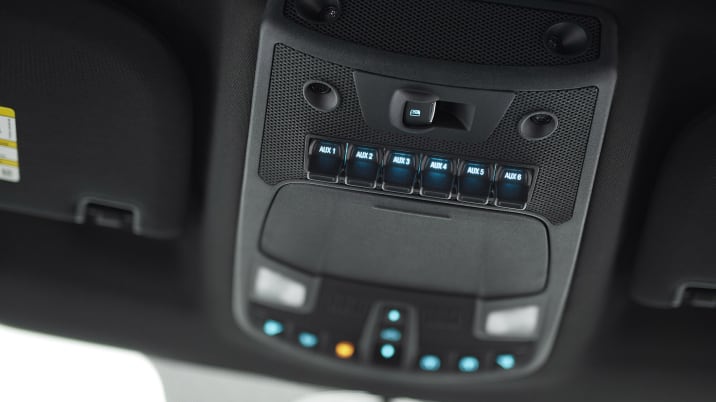 Aesthetics matter less than hardware when strafing the desert with the afterburners lit, and this truck's motivation is provided by a powertrain we couldn't have fully comprehended when the original Raptor was introduced. That 2010 truck was from a simpler time, first offering a traditional 5.4-liter V8 good for 320 horsepower; later that year, a 6.2-liter version brought much-needed muscle.

For its new supertruck, Ford has consigned the V8 to the dustbin of Raptor history. Yes, the company that brought the configuration to the masses seems intent on divesting itself of it. Its supercar, the GT, snarls rather than growls, thanks to a 3.5-liter twin-turbo V6 much like the unit found under the hood of this very truck.

The Raptor's EcoBoost V6 is an evolution of the twin-turbo 3.5 Ford has been putting in pickups for a while, and it has more than enough power, outdoing its predecessor on paper and in the real world. It's good for 450 hp and 510 lb-ft of torque, thanks in part to larger turbos, a new electronically actuated wastegate, and a new fuel-injection system. In use, it's essentially lag-free and feels a lot like a smallblock that comes on cam around 3,500 rpm (not coincidentally, the engine's torque peak) and pulls hard past its 5,000-rpm power peak.

The sound it produces is a baritone bellow that's accentuated with a dash of turbo whine. It's very bassy, but the cadence is off – the closest analogue is perhaps the Nissan GT-R. It satisfies an arbitrary auditory requirement for a performance engine without leaving any particularly strong truck impression. The old 6.2 made you want to open it up just to revel in the majestic burbles. The best reason to open up this twin-turbo V6 is to experience what it makes possible, not the sound. 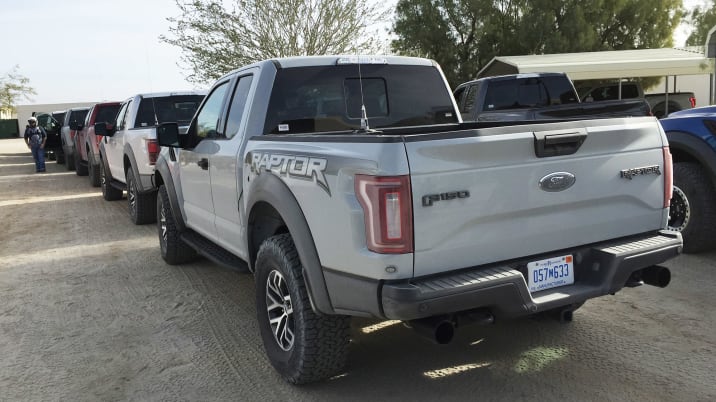 The Raptor's terrain modes play into the capability as well. Out on the high-speed desert course, a 50-odd-mile stretch of delicious barrenness, we've got the thing in Baja mode and don't give a whit what it sounds like. In addition to altering throttle response, automatically shifting the truck into the high range of four-wheel drive, and holding gears longer, Baja mode keeps the turbos spooled – a sort of anti-lag. Though it has ten to choose from, the truck is very hesitant to snatch a gear much above sixth when going flat out, so you can snap back onto the throttle at any point to Evel Knievel yourself across whatever obstacle appears.

The other modes work as expected. Mud and Sand mode slows down throttle response to prevent digging in, doesn't do the anti-lag trick, and turns on the rear differential locker – we found it useful when navigating a deep sandy bowl, as long as you keep your speed up. Rock Crawl locks in low range and the rear locker, and gives an excuse to use the forward-facing camera to spy over blind crests and line up the front wheels for obstacles. It's a neat idea, but bright desert glare makes the display hard to see; the screen really needs a shield of some sort.

All the terrain modes are aided by the superlative 35-inch BF Goodrich KO2 tires that were designed for this truck and come standard. They grip brilliantly on sharp rocks and deep sand while being perfectly tame on the pavement. The trucks we drove had optional forged 17-inch beadlock wheels, while 17-inch cast-aluminum alloys with exposed beads come standard. Sadly, we didn't get to test out the Raptor's 32-inch maximum fording depth – the desert was pretty dry. 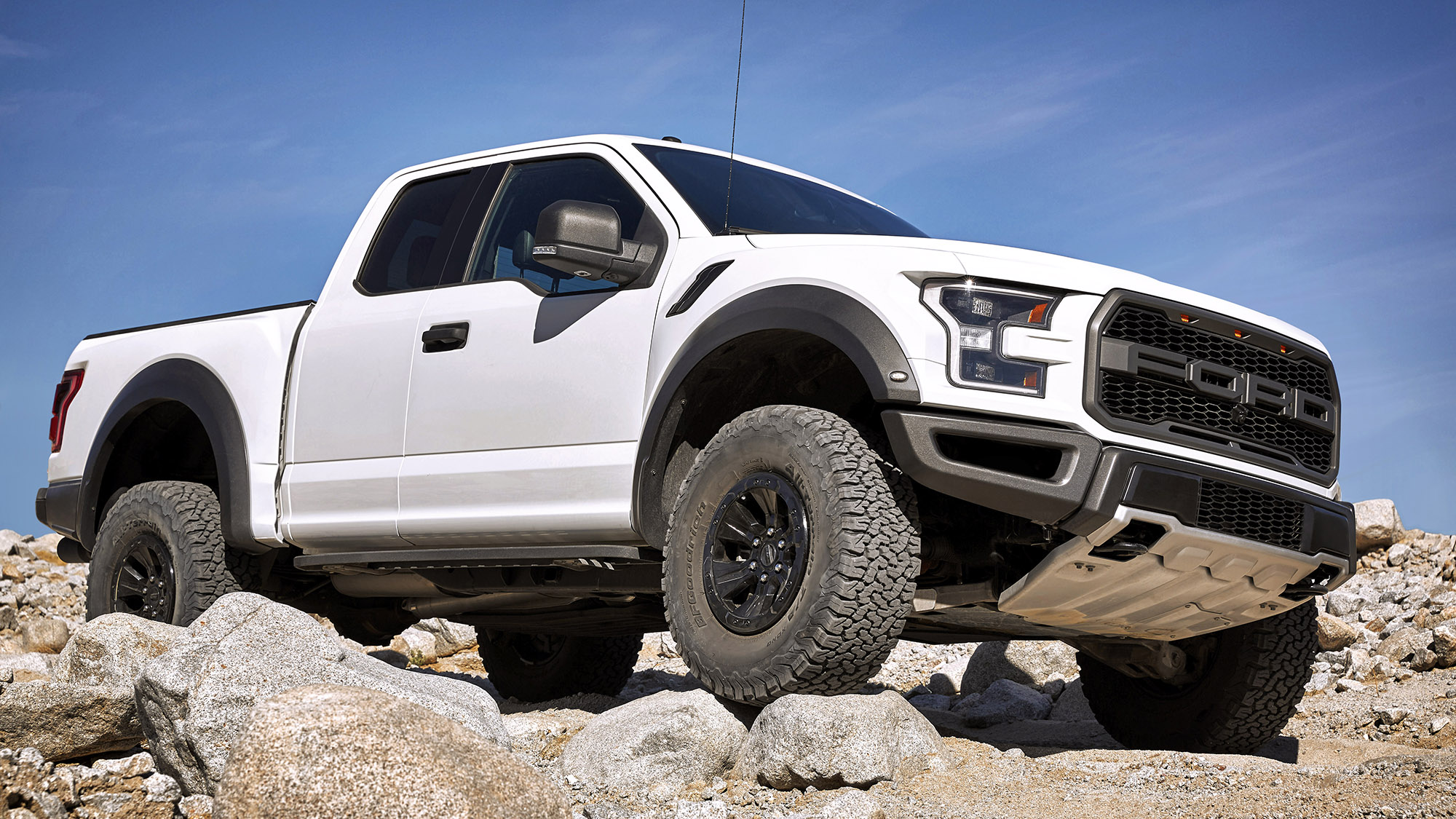 Raptor owners are likely to drive on actual paved roads at some point, and that's when the ten-speed transmission makes itself known. This gearbox was co-developed with GM, and the scuttlebutt is that F-150s so equipped (including the Raptor) have been delayed to sort out some bugs. At freeway speed, there's some hesitation as the transmission drops four gears or more before surging forward, whether it's in Normal or Sport mode. At low speeds, we noticed a few unsettling, loud clunks during shifts and some strange inconsistencies in how the slushbox processes gearchanges. Things seem to smooth out as the ratios get taller. And the Raptor is surprisingly handy on a twisty road, a credit to the masterful tuning of its do-anything Fox shocks.

That's the brilliance of the Raptor, the poster child for an era without compromise. Rather than settling for a vehicle that can do a few things well and everything else poorly, you can buy something capable of carrying you all the way home from dune-bashing in total comfort. The Raptor's few compromises are more about the driver's expectations, like sacrificing a traditional V8 for a much more powerful V6. And despite a total lack of serious competition from other OEMs in this space, the Raptor isn't unreasonably priced. A SuperCab starts at $49,520, and it's hard to think of something this size that provides anything near as much fun for the money.

Or anything nearly this engaging. At 70 mph, all four wheels completely off the sandy loam, every mental alarm blaring but with a smile as wide as the desert, you really don't care about the transmission. You can't hear the 3.5-liter over the sandblasting happening in the wheel wells. In the moment, all there is to focus on is what the Raptor can do. And you don't want to stop doing it.