A few months ago, we drove the Honda Civic Sport and found it to be a surprisingly fun and frisky hatch thanks to quick steering, a snappy shifter, and a willing turbo engine. It's also somewhat unusual in being a driver-focused compact, available with a manual, but not solely concerned with performance; sort of a warm hatch as opposed to a hot hatch. Kia's own warm hatch, the Kia Forte5 SX, is a close match for the Honda in some ways, and even better in others – for a price, that is.

The Forte5 SX starts on the right foot with its punchy turbocharged four-cylinder. It's the 1.6-liter unit, which you'll also find in the Elantra Sport and Veloster Turbo, and makes a healthy 201 horsepower and 195 pound-feet of torque that nearly matches the output of the sportier-than-the-Sport Civic Si. You'll never be waiting for that power either, as the turbo hardly lags, and any lag that is present is masked by how smoothly boost comes into play. The throttle is fairly responsive, and the revs don't get hung up between shifts like they do in the Civic Sport. 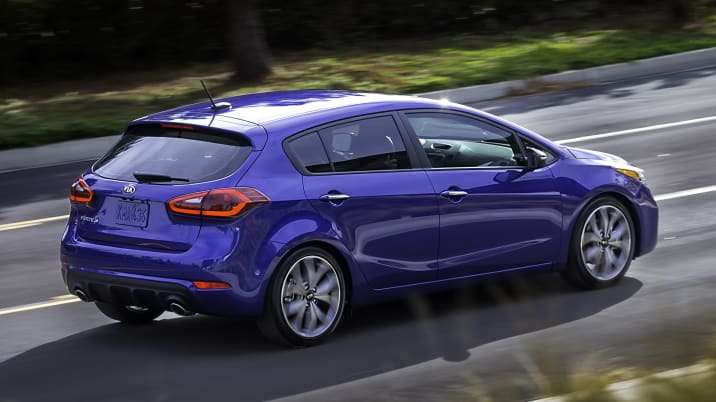 The Kia continues in the right direction by offering a manual transmission, as our tester had. In fact, the turbo-equipped SX trim is the only way to get a shift-for-yourself transmission on the Forte5. It features reasonably short, light throws, and the gates are a breeze to find. It's a tad rubbery at times, and isn't quite as precise as the Civic Sport's lever, but you won't be disappointed by it. The responsive engine also makes it easy to rev-match downshifts, but the pedals could be a bit closer together for heel-and-toeing.

This drivetrain is packaged in the crisp, clean hatchback body of the Forte5. It's refreshingly free of extraneous vents and badging, leaving the body tasteful and classy. It's a body that is happy to change directions, too. It turns in quickly and neutrally, with only mild body roll. The steering itself is also quick and accurate with virtually no dead zone.

There are a couple of handling gripes, though. The helm feels a bit overboosted and fairly numb, the ride somewhat unrefined. The body feels less controlled than it should over bumps, and the tires aren't very grippy. 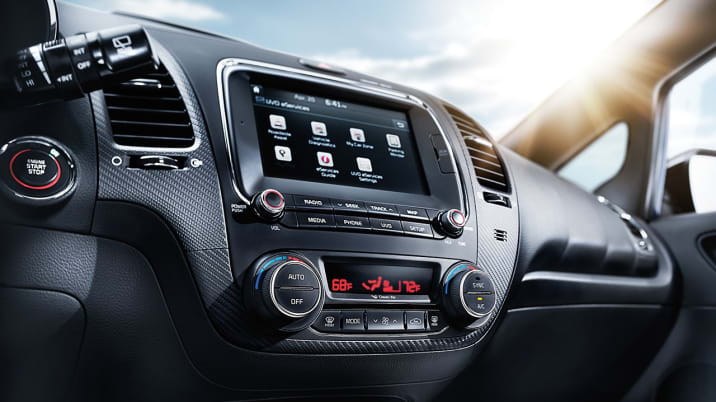 Inside the Forte5, things are a bit dour. The only color on the dash aside from black are the modest number of chrome appointments strewn about. Some of the plastic has a faux carbon fiber texture, but it almost makes the dash look cheaper, or cheesier, than it could be with better material finishes. Fortunately, the manual Forte5 SX comes with a leather interior that has bright red accents and stitching to liven things up. The seating position is also odd. The driver sits very high, and this editor felt as though his head was nearly going through the ceiling, since the top of the windshield is relatively low. In these respects, the Forte5 SX comes up at a disadvantage compared with the Honda.

It makes up for this disadvantage in the equipment department. The SX is already the top-level trim in the Forte5 line, and choosing the manual means you have to sign up for many other options. In addition to the leather, it adds a sunroof, navigation, seat ventilation, 10-way seat adjustments with memory, HID headlights. As an added bonus, the Kia's infotainment is very easy to use, with dedicated physical buttons for climate control and infotainment shortcuts. To get leather, a sunroof, and navigation on a Civic hatch, you're forced to pick one with a CVT. And features like the Kia's ventilated seats aren't an option on any Civic hatch. 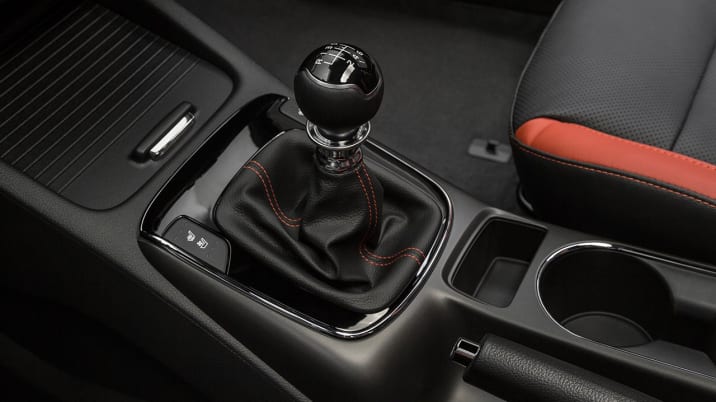 You do pay for the convenience items, though. The Kia Forte5 SX starts at a reasonable price of $24,695. But adding the manual transmission, which adds the extra features, bumps the price up by $2,200. That means the manual's base price is a somewhat spendy $26,895. The Civic Sport, spartan as it is, comes in much cheaper at $22,175 — but remember, it doesn't offer the same equipment as the Forte5 at any price.

By the way, the Hyundai Elantra Sport features the same engine as the Kia but comes in at $24,885 comparably equipped. But that's only available as a sedan until the Elantra GT Sport becomes available.

Even with the relatively high price tag, the Kia Forte5 SX is worth considering if you're in the warm hatch market. It packs plenty of driving fun in a practical, attractive package, but unlike the Civic, it also lets you indulge your manual shifting needs along with your comfort and convenience desires. That's a rare thing today, and we're glad Kia offers it.