While we think the plug-in-hybrid version offers a better overall experience, the gas-only Pacifica is still a solid minivan with a comfortable interior and good technology. Stow 'N Go seats are a huge plus if you haul cargo often.

The Chrysler Pacifica Hybrid is a compelling minivan, which feels less weird to say the more we say it (and the more we drive it). Adding a plug-in powertrain to an already solid family hauler makes it more interesting, and leaves the world just a little less greenhouse-gassy for those children you'll be carrying around in it. So, when we had the chance to actually take one home with us, we strapped in the car seat and put it through some real-world usage.

For reference, the non-hybrid Pacifica comes with the standard Pentastar 3.6-liter V6, connected to a nine-speed automatic transmission. It provides 287 horsepower and offers 19 miles per gallon city, 28 highway, and 22 combined. The Pacifica Hybrid adds two electric motors and a variable transmission to its more efficient, less powerful Atkinson cycle V6, providing a total of 260 horsepower. The Hybrid also has a 16-kWh battery pack to power its electric driving. It's rated at a combined 84 miles-per-gallon equivalent.

Our test kid, Wolfgang, loved the Pacifica Hybrid. He repeatedly asked for rides, which is not unusual, but seemed to prefer the Chrysler to his other options. He even got upset the one time we put him in Mama's Mercedes GLK while the Pacifica was in the driveway. Wolfgang especially loved the buttons to open and close the automatic doors. After heading indoors, he'd occasionally point out the window toward the minivan saying, "Button." He also thought the horn was hilarious. He's heard his fair share of car horns so far in his young life, but none have ever gotten the same belly laughs that the horn in the Pacifica evoked. We have no idea why. It sounds like a normal car horn to us.

Getting the car seat in and out of the Pacifica Hybrid was super easy. The captain's chairs make it even easier. The LATCH anchors were prominent, and easy to find by feel when reaching over the seat. It also helps that you can access the inside anchor by hopping to the other side of the vehicle, and the openness of the second row provides more room to work with. Once in the car, the huge door openings made it easy to get the little guy in and out of the rear-facing seat. While driving, the quietness of the cabin helps facilitate the sort of rudimentary conversation a toddler can hold.

Though we thought the ride to be nicely smooth – a feeling aided by the quiet operation of the electrified powertrain and the low center of gravity thanks to the battery pack ­– your author's wife still got carsick during a drive across town. While a recent drive on curvy roads in the new, effortlessly calm Honda Odyssey didn't make her queasy, a trip across town in the Chrysler was enough to upset her stomach for the rest of the afternoon. Interestingly enough, she says the stop/start system was bothersome, amplifying her sense of coming to a stop and taking off down the road again. Your author, on the other hand, barely noticed the changeover from electric to gas propulsion. 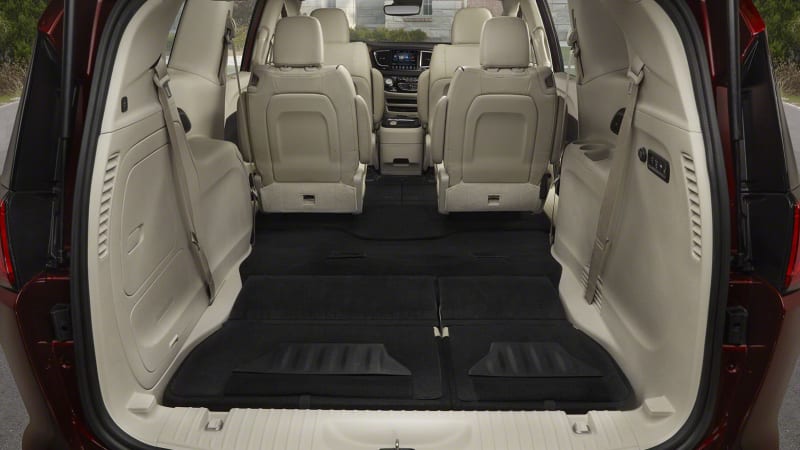 With the copious amount of room in the back of the Pacifica Hybrid, we didn't think that there'd be a need to make full use of the available cargo space. Sure enough, though, during our loan, we were asked to drop off a bookshelf to a relative. Because the hybrid version lacks Stow 'n Go in the second row on account of the battery pack under the floor, we had to wrestle one of the seats out of the vehicle (and we had trouble getting the seat to unlatch from its mooring). Still, as little as we move large items our life, we'd prefer the PHEV powertrain to Stow 'n Go, given the option. It tends to be the case that the more cargo capacity one has, the more likely one is to need it (or to be called upon to use it), and we think that's exactly what happened this weekend. While the second-row seats only slide a few inches, the third row folds flat with ease, and that's all the extra space you'll usually need.

Regardless of test wife and test kid's thoughts on the Pacifica Hybrid, we would pick it over the rest of the herd, largely because of the PHEV powertrain. We enjoy the quietness, and the less frequent trips to the gas station. Most of our driving was within the 35 or so miles of (almost purely) electric range we could get out of the car, and the gas engine only came on when we were accelerating onto the highway, or in the few miles here and there when our journeys had depleted the battery. During our time with the car, we used the mobile charger at home, which worked just fine for our weekend driving schedule. It took about 13 hours to charge on a regular 120-volt plug. We'd definitely install a higher-voltage charger at home to get that down to a couple hours, and, once we had that, we'd likely entertain the idea of adding another (smaller) plug-in car to our garage.

One final thought relates to the Pacifica Hybrid's instrumentation. It's true that the electric driving is downplayed in this plug-in, and we understand why: keeping it simple makes it more accessible to first-time EV owners who don't want to worry about driving modes or energy management. Still, there is a display in the touchscreen infotainment system that allows the driver to observe the power flow between the engine, battery, and electric motor. There's also a permanent Power/Charge gauge on the instrument panel, as well as a display option on the digital display between the gauges. It seems like a lot of different places to monitor the same thing, without really offering much in the way of actual interaction. We hope, once more people become more comfortable with electrified driving, that Chrysler will offer more opportunities to manage energy, either through drive modes or dialing up regenerative braking.

The Pacifica Hybrid is a great minivan, and doesn't really feel like something super different from the rest of the competition, despite its plug-in powertrain. It's easy to drive, despite its size. It's smooth and quiet, but so is the new Honda Odyssey. The Pacifica Hybrid's price point starts high at $43,090, but gets the content of a higher trim level (8.4-inch touchscreen, power sliding doors, heated leather seats). It's also eligible for the $7,500 federal tax incentive, plus other incentives in certain states, which makes it pretty competitive with a Honda or Toyota. Were we to spend over $40k on a minivan, this would be our pick. We like the refinement of the Odyssey, and the disappearing seats of the standard Pacifica, but the plug-in powertrain is just too good to pass up.