For the final song on their delightfully buoyant and mordant 1996 album This is a Long Drive for Someone with Nothing to Think About, Pacific Northwest indie rock band Modest Mouse penned an even more cynical response to David Bowie's already nihilistic ode to interstellar flight, "Space Oddity" The song imagines the life of a lonely female passenger on a flight to some distant lunar satellite, lost in post-gravitational anomie ("She's the only rocketeer in the whole damn place/They gave her a mirror so she could talk to her face.") Dreading the endless blankness of her voyage as much as the senseless achievement of reaching its destination, the unnamed woman wishes she could just read a dime-store novel and return home. It is titled, poignantly, " Space Travel is Boring."

We recently visited the Kennedy Space Center in Cape Canaveral, Florida, NASA's literal launch pad for the Apollo missions and the Space Shuttle. Since there are currently no rockets going up, Space Florida's Shuttle Landing Facility did us the favor and allowed us to use the 3.5-mile-long runway built for the Shuttle — literally, the longest stretch of underutilized, perfectly straight, perfectly paved roadway in the world — for a series of automotive maneuvers. Our vehicle of choice was the $293,300 2018 Bentley Continental Supersports. This was decidedly not boring. 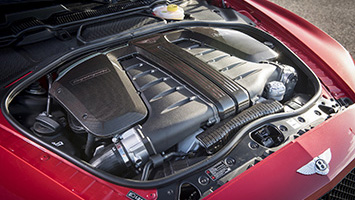 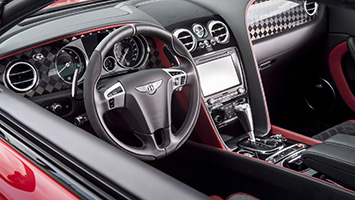 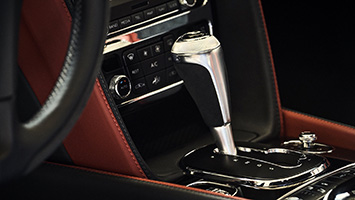 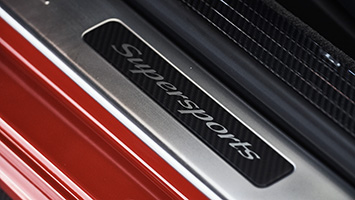 The Supersports is an enhanced version of an already extremely potent vehicle. Featuring an upgraded crankshaft, torque converter, and turbochargers for more power and improved power delivery, the Supersports' 6.0-liter W12 engine produces an even 700 horsepower, and 750 lb-ft of torque. That makes this the most powerful and fastest Bentley ever made. Sixty miles per hour is dispatched in 3.4 seconds on the way to a maximum velocity of 209 mph. The largest carbon ceramic brakes of any production car come as standard equipment, as do carbon fiber hood vents, front splitter and rear air diffuser, side trim, and a planed long-board of a rear wing. Handsome 21-inch lightweight forged wheels are also part of the package, though, really, weight savings is almost irrelevant in this vehicle. The Supersports weighs over 2.5 tons, or about as much as one of the tread belt shoes on the diesel/electric crawler used to tug the 70-million-pound Space Shuttle and its boosters out onto Canaveral's runway.

We were tugged out onto the runway as well, though in a slightly different fashion. Like a solid booster rocket, which can be lit, but not extinguished, the Supersports features a preternatural and uncanny capacity for thrust. We had the chance to experience this in a series of maneuvers on the concrete strip, including a high-speed slalom and accident avoidance course. These were also designed to show off the Super's trick, brake-based torque vectoring system, borrowed from the GT3R racer, an intervention that is as eerie and seamless as the ones on reality TV are not. But the centerpiece of our adventure was a top-speed run. For this, we started at one end of the empty roadbed, and simply kept the throttle pinned until we ran out of, well, space. 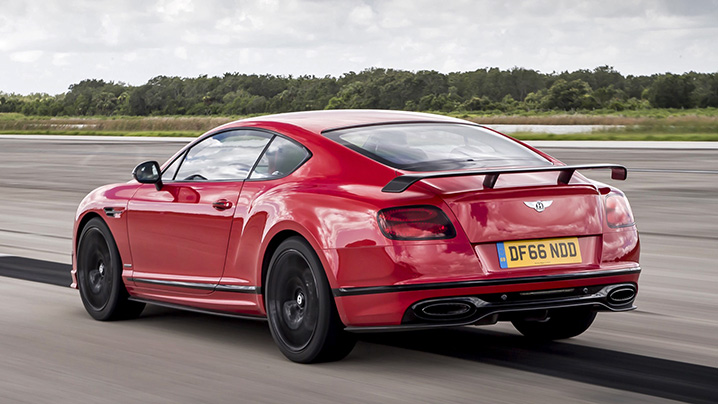 The Supersports never lets up. Our co-pilot, a professional Bentley race driver, called out our speeds in twenty and then ten mile-per-hour increments once we passed 100. By the time he said the safe word, about two miles in, indicating our need to ease off the gas, we had crested 190. The car had just shifted gears and would have kept tugging. The pros, who overran the boundary, made it to 198.

At this speed, the most profound sensation is one of absolute, skull-sucking terror. Inputs must be as miniscule as Lloyd Christmas' IQ, crosswinds feel like a croquet drive from Thor's hammer, and the actual physical horizon approaches with apocalyptic surety. Make the slightest mistake, and you will go careening ass-over-tits-over-eyeballs-out-of-sockets-over-brains-and-blood-splattering-everywhere into the mangrove swamp runoff channels that line the runway, where plentiful alligators will feast on the remains of your charred and broken corpse until your orthodontic surgeon will not be able to identify an incisor. But the second-most profound sensation is serenity. It is possible to have a civilized conversation at these speeds. That is, if you're capable of overcoming the vile retching noises you're making as you try to ward off the panicked instinct to dry-swallow your tongue. (The Supersports' interior, with its Neapolitan ice-cream inspired triple-hued leather, plus Alcantara inserts, does little to diminish the gag reflex.)

Of course, activities like these are a performance, a simulacrum. They represent a fantasy of the kind of experiences that an owner of a car like this could potentially have — if, for example, they bought NASA at the Government de-accessioning yard sale we're likely to soon witness. But they're also a means for discovery of how people react under intense pressure, how engineering is capable of overcoming superhuman challenges, and what may or may not happen once we transcend the fervent boundaries of the known. Kind of like venturing into space.