David Boldt
If the body-on-frame, off-road capable SUV isn't fully dead, it's increasingly rare. But standing alongside holdouts like the Jeep Wrangler or Toyota 4Runner, the Nissan Frontier and Toyota Tacoma - midsize truck mainstays – are prepared to fill the need for a rig that you can beat but it won't die.

In press material for these trucks, there's an overlap in the messaging. Nissan's Frontier is "first and foremost a workhorse – designed to tackle both professional and personal projects." Meanwhile, the 2017 Tacoma "welcomes (the) all-new TRD Pro to its work-hard, play-hard lineup." To industry observers, the Frontier is in desperate need of an update, while the Tacoma recently received a redesign Toyota calls "all-new." A prospective buyer will see abundant flexibility and capability from both.

NISSAN FRONTIER PRO-4X: Although its design is not quite old enough to be labeled retro, the 2017 Frontier comes close. With slab sides and an almost vertical windshield, the Frontier is the staid, upright vehicle for those preferring good fit to high fashion. And since the sheetmetal, with its more vertical proportions and short overhangs, hasn't changed in over a decade (today's Frontier was new in 2005), you can reasonably assume Nissan knows how to build it. 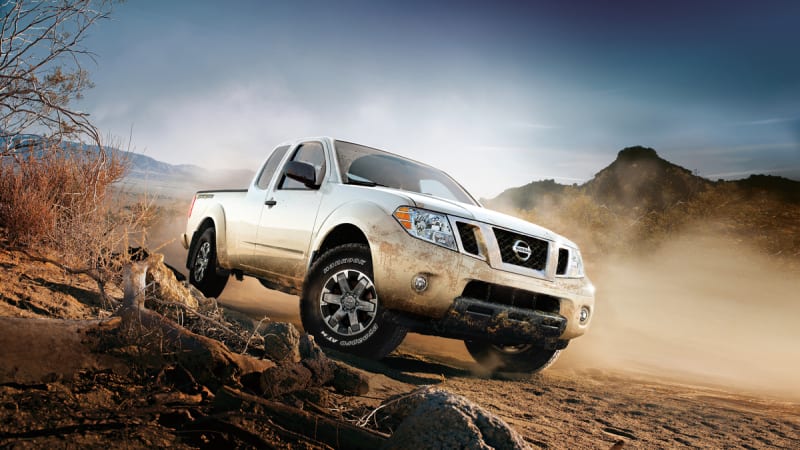 Or – more accurately – overbuild it. When last redesigning the Frontier, Nissan's engineering team appropriated a great deal of the full-size Titan in its frame and suspension design. The driver enjoys a solid platform with perhaps even excess capacity. Of course, that comes at the cost of efficiency: A PRO-4X equipped with the 4.0 liter V6 has an EPA estimated mpg of 15 city, 21 highway, and 17 combined. Several full-size pickups do better than that.

Inside the Frontier Crew Cab (a King Cab is also available) you'll find command-of-the-road seating up front, along with let's-run-to-lunch room in the rear. The rear seating is far more expansive than that of the King Cab (pictured above), but this isn't the place for your kid's basketball team. For errand running, it's satisfactory; for longer trips with four, you'll want more room.

Beyond hard plastic surfaces and the dated design, there's no better way to identify the Frontier as old than its available 5-inch color display on the instrument panel.

In the Frontier's PRO-4X version, Nissan continues to deliver cross-continent capability in a reasonably maneuverable size. With 261 horsepower and 281 pound-feet of torque (at 4,000 rpm), Nissan claims a towing capacity of almost 6,300 pounds – more than enough to tow a Jet Ski (or six). And with a longish 126-inch wheelbase, you'll find the ride composed, in-town handling reasonably responsive, and off-road performance credible.

Although the base Frontier (four-cylinder, 4X2 King Cab) can be purchased for just $19,000 (and would make a great work truck), a PRO-4X with automatic, mats and tie-down cleats comes to $34,500. Going 'PRO' with the Frontier provides Bilstein off-road high-pressure shocks; skid plates under the fuel tank, oil pan and transfer case; an electronic rear differential locker four-wheel limited slip; and unique 16-inch alloy wheels with 265/75R16 all-terrain tires.

Relative to its $19K starting point, arriving at a window sticker of $35K is quite a jump. But it's a bargain compared to any number of full-size pickups with $70,000 window stickers (or Jeep Wranglers at $50,000).

TOYOTA TACOMA TRD PRO: With a shelf life measured in decades, and 15-year-old Tacomas still selling for serious money, it's no surprise that Toyota's "Taco" continues to attract consumers. Toyota's San Antonio assembly plant – where it also builds the full-size Tundra – is hard-pressed to keep up.

Like the Frontier, today's Tacoma was originally launched in 2005, got some visual and functional tune-ups in the following decade, then underwent what Toyota describes as a full redesign for the '16 model year. And while a great deal of the truck was re-engineered, you wouldn't know it visually. 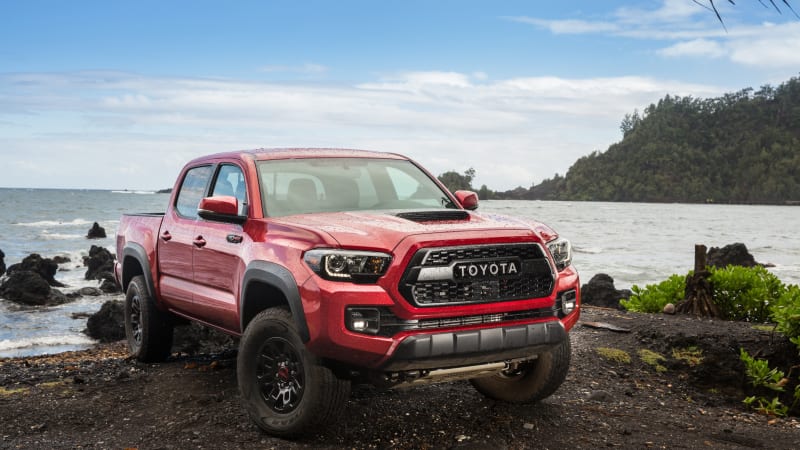 While the Frontier looks to have been drawn with a straight edge, the Tacoma is more organic, especially after the (modest) sheetmetal mods made for the '16. The Tacoma looks larger, and is: an inch more wheelbase than the Frontier and almost seven inches longer. It flirts with a full-size designation, at least as we perceived 'full-size' some 10 years ago. Despite the larger footprint, the Tacoma weighs 4,445 pounds, 100-some pounds less than the Frontier.

If the Tacoma's exterior is familiar, you'll find more "new" inside. There's more softness to the touch surfaces, and attention has been paid to a refined, quiet ride with enhanced door seals, a multi-layer acoustic windshield, sound-absorbing headliner, and a floor silencer pad.

The TRD Pro is the step up from the TRD Sport and TRD Off-Road. You will enjoy a host of upgrades, and capability that's competitive with most off-road SUVs or trucks. Supplying an approach angle of 35 degrees, departure angle of almost 24 degrees and a breakover angle of 26 degrees, the TRD Pro will be tough to stop.

With a base price of $40,960 for the TRD Pro with six-speed manual, and another $2,000 for the six-speed automatic, you can easily get into the mid-$40s. However, that's still short of what Jeep customers spend on the Wrangler Unlimited Rubicon.

While both Frontier and Tacoma speak to a simpler era, the upgrades made to the Tacoma pull it more fully into this century. The Tacoma's $7,500 premium over the Frontier, however, would buy you a small-displacement adventure bike that would fit nicely in the bed of the Nissan.