David Boldt
Introduced for 2006 and built in Lafayette, Indiana, atop a Legacy platform, the B9 Tribeca was Subaru's first attempt at a three-row crossover. Like the smaller Mazda5, the B9 provided seating for your kids but cramped quarters for adults. Add to that the controversial styling and upmarket pricing (before Subaru was regarded as upmarket), and you had a tepid response from the buying public.

While the styling – specifically the B9's nose – was controversial, I liked its Euro-inspired profile on the outside and really enjoyed the design execution on the inside. The third row was optional, and for the occasional extra kid or small adult, useful. It's the utility of the footprint, however, I really like, and with a 3.0 liter Subaru six, it's perfect for your urban or suburban adventures.

Autoblog's 'For Sale' example, located in Woodland Hills, Calif., has average miles for an 11-year-old vehicle and looks to be in good cosmetic condition. Despite Subaru's reputation for rugged reliability, a vehicle of this age will inevitably need some attention. A pre-purchase inspection should be mandatory, and you would hope for a clean CarFax. At $6,500, the asking price is at the low end of typical for a clean example with this mileage and may reflect its Sunbelt location, since Subaru resale is historically higher in the Northeast and Northwest. 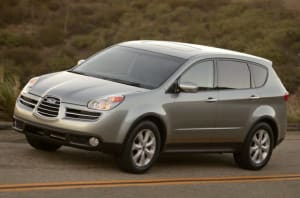