View All Specs
When you think of places you'd want to take the 650-horsepower Chevrolet Camaro ZL1, what comes to mind? Perhaps a drag strip, where you could verify Chevrolet's claimed 3.5-second 0–60-mph and 11.4-second quarter-mile times? Maybe a road course such as Willow Springs, where we first drove the hardtop. How about 500 miles of relentlessly straight interstate? Well, as you may have guessed, one of these is not like the others, and it happened to be the choice of Chevrolet.

To try out the current range-topping Camaro's droptop iteration, Chevy organized a road trip from Charlotte, North Carolina, down to Daytona, Florida, in time for the 500. Which is great, but we only had a single day to make the 500-mile trip before the cars were shipped out. That meant we didn't really have time to, in the words of Chevrolet's marketing department, "find new roads." However, this relatively dull route did give us an opportunity to experience another aspect of the Camaro ZL1: what it's like to live with in the real world.

Before we get too deep into driving impressions, we should cover what's different between the coupe and the convertible. First and foremost is that, unsurprisingly, the convertible weighs more. The droptop has about an extra 200 pounds of weight thanks to the standard chassis reinforcements found on every other convertible in the Camaro lineup plus the top mechanism itself. The convertible has a different rear wing, too. It uses the unit on the standard SS. One of the key reasons for this is that the SS wing has an embedded antenna, which is necessary since there was no good place on the soft top to install an antenna.

The convertible also loses the coupe's fancy electronically controlled limited-slip differential. Instead it makes do with a mechanical unit. Finally, the suspension has been slightly re-tuned for the extra weight, and the Performance Data Recorder is not available. Though the option is nice, this is an understandable omission, since not many convertible owners take their cars to the track.

The rest of the package matches the coupe. The front fenders are the wide versions to accommodate the 285-mm front tires stopped by six-piston Brembo brakes. The back has 305s and four-piston calipers. And most important, the same 650-horsepower, 650-pound-foot supercharged LT4 V8 is under the hood.

Put simply, that engine is a hoot and two halves. It's ready at any moment to belt you up on-ramps and across intersections as fast as you dare. The noise it makes is excellent, too, and it's not entirely uncivilized. In the quietest setting, which is the default for the Touring drive mode and selectable in the infotainment menus, the exhaust is kept quiet, with just a bit of burble reaching your ears, as well as a faint whine from the supercharger. Crank up the revs and that mellow rumbling turns into a hearty, eager bark that overpowers any other nearby sound. It isn't deafening, but will certainly announce your presence to anyone within a quarter-mile. The top keeps noise to a minimum, but in 18 seconds you can drop it so you can hear the full glory of the exhaust note.

The engine isn't exactly frugal, though. The manual manages EPA ratings of 14 mpg city and 20 highway. The automatic has the same highway mileage, but city economy drops to 12 mpg. And you can expect to see lower numbers if you abuse the gas pedal. But if you're buying this car, you probably don't care too much about fuel economy, and the sound alone is worth the cost of a few miles per gallon. 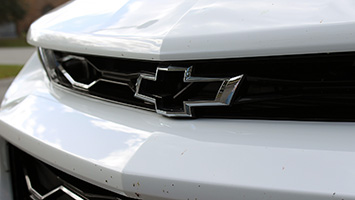 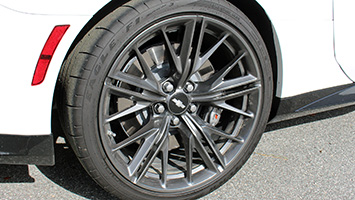 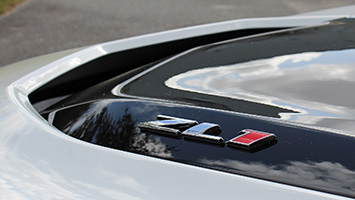 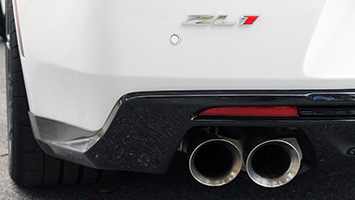 Despite the big power numbers, the ZL1 is a breeze to drive on open highway, even for someone used to driving rather underpowered machines such as this editor. Not once did the Camaro threaten to break loose and throw us into traffic or a tree. Prodding the pedal just led to smooth, controllable acceleration. It's absolutely brisk, of course, and is accompanied by a wonderful soundtrack, but very easy to manage. As easy as the car is to drive we're still certain that it's possible to get in over your head with this thing and become a YouTube sensation, which is something we bet Mustang owners would appreciate. But drive with just a modicum of common sense, and you'll be A-OK.

The engine's supporting cast is excellent as well. Buyers have a choice of either a 10-speed automatic or a six-speed manual, and both are great. The 10-speed shifts extremely quickly, and rather smoothly. Left to its own devices, it picks gears smartly and downshifts with virtually no hesitation. We wouldn't blame you if you picked the manual, though, which is still our preference. The throws are short and ultra-positive, and there's not a hint of slop or vagueness.

Granted, we didn't give the steering a tremendous workout on the smooth and straight highways of the American Southeast, but on the handful of curving off-ramps it impressed. It's highly precise, and even passes some feedback up to your fingers. That feedback comes by way of a soft and comfy Alcantara-covered wheel. Steering weight is good in Touring and Sport drive modes, both of which also affect suspension and exhaust tuning, plus shift timing in the automatic, but it becomes artificially heavy in Track mode. The good news is that the steering mode, as well as the suspension and exhaust settings, can be picked a la carte through the car's infotainment system. 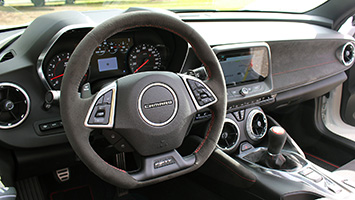 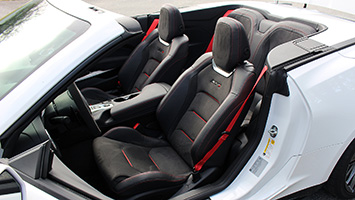 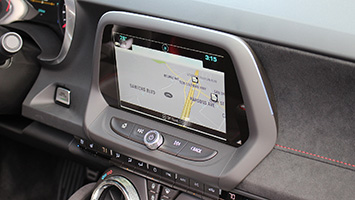 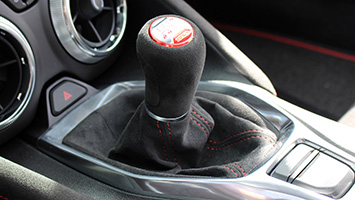 The ZL1 convertible, as with the coupe, uses Chevy's now-famous magnetorheological suspension, and it continues to impress. On the handful of curves we found, the Camaro remained flat and poised. And even with its impressive cornering capability, it still does a good job of damping bumps and road imperfections. The ride is never glass-smooth, and you'll feel the different pavement textures, but you'll rarely be kicked and bucked about. Even Track mode does an admirable job keeping passengers from being jounced too much, but the Touring setting definitely offers the best ride. On a related note, just going in a straight line, the ZL1 was extremely stable, and extra-legal speeds almost felt slow. It was a little too easy to creep up to them without noticing. Thankfully no one in a position of authority noticed.

There are chinks in the ZL1's armor, though. One of the most notable is the noise. We had the chance to drive a coupe and a convertible back-to-back, and the good news is that the convertible isn't much louder inside than the coupe, with wind noise being more pronounced on the droptop. It even has an attractive liner on the inside that gives it more of a hardtop look when it's up. However, both cars suffer from a significant amount of road and tire noise. There's a near-constant low roar on the highway that varies depending on the surface. It's not nearly as loud as, say, in our long-term Miata, but it's noticeable enough that it could be tiresome on particularly long highway jaunts.

The interior helps make up for that in many respects. As mentioned, Alcantara covers the steering wheel, as well as portions of the dash, doors, and the shift knob in manual-transmission cars. It's also found on the supremely comfortable Recaro seats. Unlike some other sporty seats (we're looking at you, Focus ST Recaros), the buckets in the Camaro hold you in place but don't hug you so hard you feel constantly short of breath. The driving position is quite good, too.

Treating the ZL1 as transportation did reveal some first-world problems. There are almost no useable cubby holes for stowing things, and the bin ahead of the shifter is a joke. Anything we placed there would soon be somewhere behind the seats with a stab of the accelerator. It was entertaining, but inconvenient. The glossy, downward-facing touch screen frequently had loads of glare that made it difficult to see, and the back seats are virtually useless except for cargo, or perhaps small pets. The trunk is decent, but if you're taking a long trip, you'll want to keep the top up to maximize cargo space, as dropping it cuts into the space significantly.

If you hadn't guessed, even with the minor gripes, we love this Camaro. It looks good, it's powerful, and it goes as well in corners as it does in a straight line. To get one, you'll be shelling out quite a few dollar bills. The manual-transmission ZL1 starts at $69,435, and opting for the automatic will bump the cost to $71,830. While not cheap, it's still a solid performance bargain in the grand scheme of things. For a Corvette Z06 with the very same engine, you'll be spending $87,935. The Vette is lighter and quicker, but not quite as practical. A Ford Shelby GT350 will run you less than the ZL1, starting at $57,045, and it has that amazing flat-plane-crank V8. Even the extra sporty GT350R starts at $64,545. However, the GT350 Mustangs make just 526 horsepower, and you can forget about a convertible. Really, to get a four-seat convertible with the kind of power and performance the ZL1 provides, you'll have to spend at least six-figures. After a 500-mile trip, that really puts the Camaro in perspective.