Are you not entertained? | 2017 Chevrolet Camaro ZL1 First Drive Barnum, Bailey, and all the Ringling Brothers combined aren't even half as entertaining as GM's supercharged LT4 small-block V8. This direct-injected, variable-timed, intercooled, all-aluminum, one-cam, 6.2-liter hyper-clown idles with an evil chortle, rips upward singing like Marvin Gaye at his "Let's Get It On" peak, then finishes way past 6000 rpm with the maniacal cackle of Frank Gorshin as The Riddler. The LT4 is rated at an astonishing 650 horsepower and until right now there've only been three ways to get it. First, in Chevrolet's two-seat Corvette Z06. Second, in Cadillac's four-door CTS-V. And, third, in a crate from GM Performance Parts. But it's this fourth way that's the best way. That's the LT4 powering the 2017 Chevrolet Camaro ZL1.

At a few thousand dollars less than the 707-horsepower Dodge Charger Hellcat, the ZL1 is likely the cheapest new car with a top speed beyond 200 mph. Chevrolet isn't saying anything about the maximum velocity (at least not yet), but come on. This much power? With a lot less frontal area than the broad-beamed Charger? Two bills at the top end is inevitable.

So the LT4 is a gigaton of giggles. But think of the rest of the ZL1 as the perfect engine amplifier. The chassis is almost neutral at speed, there's plenty of tire aboard to hang on through the hairiest corners, and the brakes could stop a runaway Federal budget. Plus there's enough technology aboard that a dog could hustle it through the Nürburgring in under eight minutes. Even faster if he's a mutant who has grown opposable thumbs. 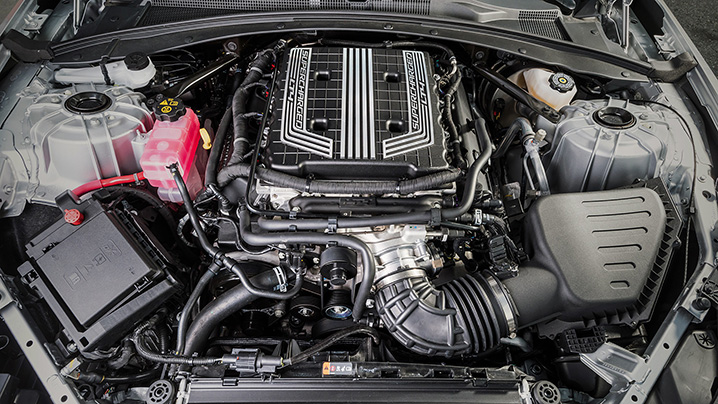 It's not fair to think of the ZL1 as merely a Camaro with a hairy engine. All the front body work is new, with wider fenders to cover 285/30ZR20 Goodyear Eagle F1 Supercar 3 front tires surrounding ginormous 20x10 forged-aluminum wheels. The front fascia has been redesigned so that air can feed all ten of the heat exchangers stacked behind it. And the tail contains a new electronically controlled limited-slip differential that securely turns power into thrust even during improvised aerobatics. And those rear tires are 305/30ZR20s around 20x11 wheels. Of course it's still a Camaro, but the substance is different enough to alter it into something else. Something better.

While the LT4 is the headliner, it's the new 10-speed 10R90 automatic transmission that is the ZL1's greatest technical achievement. Developed in conjunction with Ford (a cousin transmission is found in Ford's 2017 Raptor off-road truck), the 10R90 sets a new standard for transmission intelligence. It's not just that the shifts are strong and reassuring, but that the algorithm making the shifting decisions is freakishly prescient.

At Willow Springs Raceway in California's Mojave Desert, Chevrolet let loose a motley assortment of goofball journalists with ZL1s. First I drove a ZL1 fitted with the familiar Tremec TR-6060 – a version of the same T56 six-speed manual that's been installed in American performance cars since the introduction of the Dodge Viper in 1992. Along the main stretch, the ZL1 would freight train to about 134 mph before it was time to brake for the first corner. With the car and 10-speed both set in "Track" mode, I was at 142 or 143 mph as I arrived at the braking point. And then, simultaneous to when the calipers chowed down onto the discs, the 10R90 confidently blipped rapidly to the lower nominal gears. I'm not sure which gear it was in when the ZL1 hit the first corner's apex (a lot was going on and there are a lot of gears), but the exit speed out of the corner was startling. I know it was the genius transmission that set me up, but I felt like a he-stud driver anyhow. 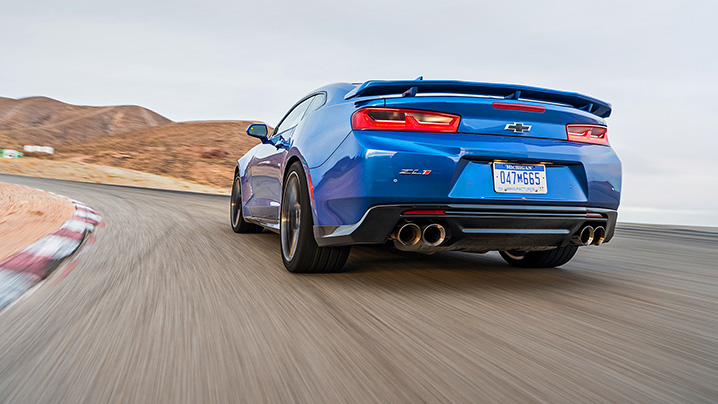 With 650 pound-feet of peak torque at 3600 rpm and plenty of torque across the rev band, the LT4 could get along fine with an old two-speed Powerglide. But the range of cogs in the 10-speed means that the logic circuits virtually always have the ZL1 primed for corner exit rocketry. It's not perfect – climbing hills out of corners seems to fluster it a moment – but it's more perfect than I could ever hope to be on my own. I was a lot quicker emerging from corners, a lot faster on Willow's long straights, and much more confident when I let the 10-speed automatic shift for me.

Of course the 10R90 can also be shifted manually and those shifts are quick and precise too, but most drivers aren't as good at gear selection as the 10R90 is.

Also, if you insist on shifting a manual yourself, here's a good word about the TR-6060. Despite that it's now a quarter-century old, this is still a fun box to stir. It takes some heft to clobber some shifts, and the gating can make some downshifts speculative, but it's a transmission full of positive male essence. It just won't be as quick on a racetrack as the 10-speed automatic. And a lot more tiring work in everyday driving. 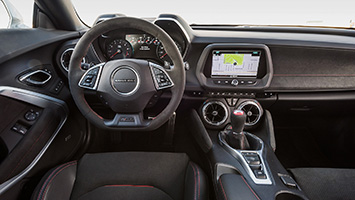 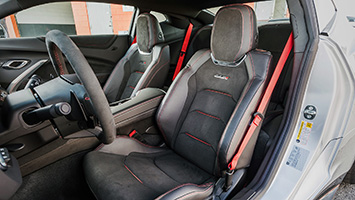 Another big plus for the ZL1 is the big brakes. The ventilated iron discs up front measure 15.35 inches in diameter and are clamped by Brembo six-piston calipers. Out back the vented rotors go 11.7 inches in diameter and are squeezed by four-piston calipers. At Willow Springs, where we were limited to three consecutive laps, fade never seemed to arise as a concern. The brake application itself was linear and easy to modulate, and the pedal was always firm.

The new trick embedded in the braking system is a line lock for performing epic burnouts. Well, at least 15 seconds of epic. There isn't any new hardware involved in the line lock; instead the computer operates on the standard Camaro ABS distribution block to hold the front wheels and leave the rears free to spin. There's an inscrutable, menu-driven electronic ritual to access the line lock, but it works great. It limits itself to only 15 seconds of operation, which is more than enough time to heat tires for a drag-strip run. But if you're entered in a local burnout contest, that won't be enough time to challenge for the win. It is, however, possible to perform championship-caliber burnouts using more traditional methods.

Even without the help of line lock heating the tires, GM expects the ZL1 to rip from 0 to 60 in 3.5 seconds or less. The quarter-mile should be consumed in about 11.7 seconds at 127 mph. Meanwhile, GM also claims it should perform a skidpad twirl good enough for 1.02 G while in steady-state cornering. 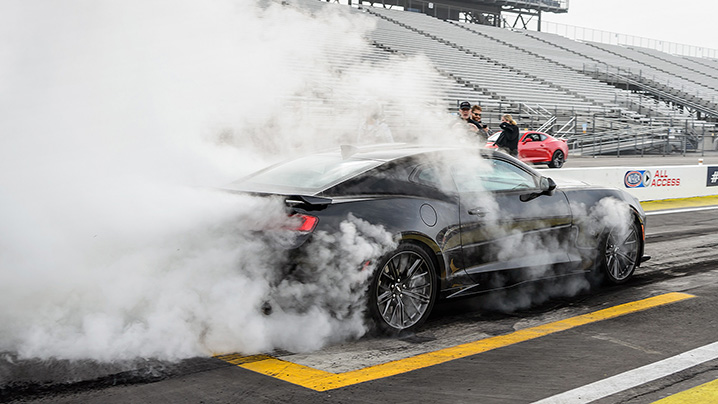 Riding on a 110.7-inch wheelbase, the Camaro ZL1 puts four inches more room between its axles than the Corvette. But that's 3.9 inches – okay, call it four again – less than the CTS-V. It's sort of a compromise, really, with the ZL1 riding more comfortably than the close-coupled Corvette, but responding more nimbly than the Cadillac sedan. Most of the chassis components, however, are shared with the Caddy, since both are built atop GM's Alpha vehicle architecture.

So up front there are MacPherson struts and in back a five-link independent system. But the truly wicked element of the suspension is GM's now-signature magnetorheological shock absorbers that use electrical current and a conductive fluid to vary damping and rebound depending on conditions and driver desires. This "Magnetic Ride" technology is almost mystifying in its ability, tunability, and general awesomeness. It works as well in this application – with various algorithms optimized for particular driving challenges – just as it does in the Corvette and several Ferraris, as well as other vehicles. Throw in a spooky Performance Traction Management (PTM) system and the result is a car that corners well, whether cruising or crushing.

Like the new L88-style hood? It's aluminum and available with a carbon-fiber center section for additional ego gratification. The front lower grille is somewhat psychedelic, but the upper grille fills a narrower slot than in other Camaros and looks better for it. 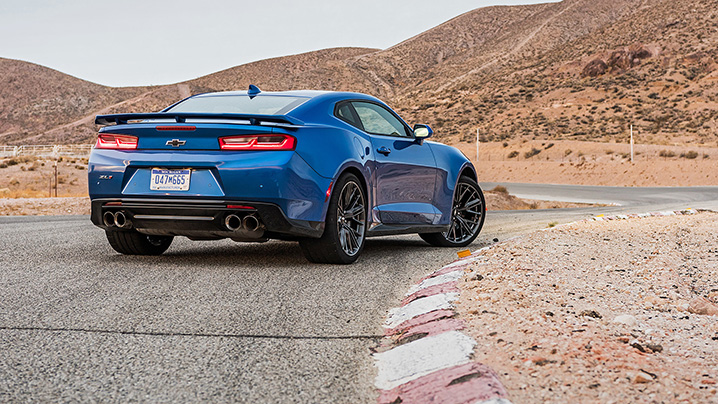 This is not a perfect car, however. The trunk is puny, some of the instrumentation is nonsensical, and the center stack screen is angled downward, making it tough for the driver to see it. The highlight of the interior is the optional Recaro front chairs that are ideally shaped for both comfort and hero work.

Beyond that, the electric power steering feels heavy and occasionally ponderous. And while overall traction is good, the front tires don't always respond with the immediacy that would result in excellent initial turn-in. And while this ZL1 is lighter than the fifth-generation Camaro, it still comes in only a few bacon strips short of two tons in overall weight. Physics can only do so much with that mass.

Prices for the new ZL1 coupe start at $63,435 including a $1,300 gas-guzzler penalty. That's not cheap, but this is the most fully realized, better performing muscle car around. A convertible model is available as well, for an extra seven grand.

The 2017 Chevrolet ZL1 is 70 horsepower more powerful than the last ZL1, and all those extra ponies want to entertain you. So be entertained.