The 2017 Honda Ridgeline is a gentleman

Ruth Manuel-Logan
The once rough-and-tumble image of the iconic pickup truck where its drivers were typically brawny sweaty macho men, who could dig mighty ditches, build cabins and hunt game, is now but a mere memory. There are very few in the current crop of four-wheeled, roughnecks that jounce and bounce down roads with many now actually rivaling quite a few luxury sedans. The 2017 Honda Ridgeline is a refined workhorse but don't get it twisted, it can still handle its fair share of heavy duty but without breaking much of a sweat.

Redesigned, aerodynamic and definitely sporting a good face, the second gen Ridgeline kind of reminded me of its cuz, the Pilot SUV. The pickup has a premium look, well-placed distinctive lines, sleek standard LED wraparound headlamps, LED vertical taillights and integrated trailer hitch (with 7-pin connector). I stopped short at the pickup's cargo bed (which is lighted btw) because it appeared less than the norm (5'4" L) but looks are deceiving, as it can actually haul a 4x8 sheet of plywood. The cargo bed is also a showstopper in more ways than one. It is made out of a textured composite polymer that is scratch, dent, and scrape proof. The pickup's dual-action tailgate swings down and also out and when opened, and there is a lockable 7.3 cu. ft. In-Bed Trunk that comes with a drain plug so tailgaters can fill that sucker up with ice and brewskies, then drain it afterward, or travelers can pile in their luggage. Honda also offers in their truck, an available 150W/400W Trunk-Bed outlet in the cargo bed's wall where folks can plug in and power anything. Lastly and an industry-first, the Ridgeline comes with its own built-in boom box of sorts, not only in the cab but a 540-watt Truck Bed Audio System uses the bed walls to pump out tunes from its infotainment center that is sure to disturb the peace in a good way, as the party people get turnt up. 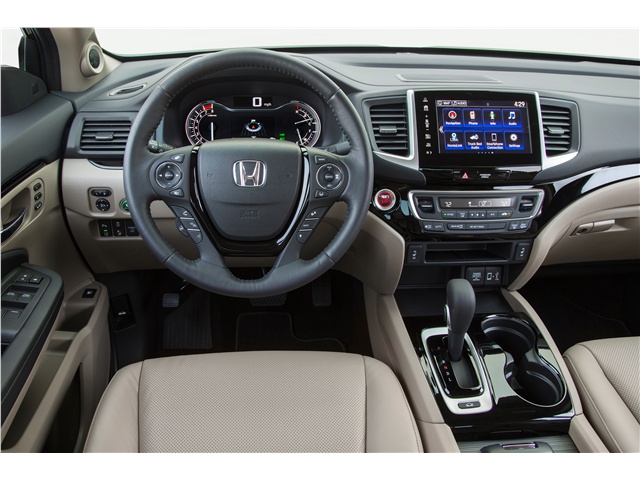 I was not ready for the Ridgeline's inviting interior because after all, "it is a pickup," I kept reminding myself. Loved the slide-in height of the truck that has a ground clearance of 7.8-inches. Getting all settled into the Japanese midsizer's innards, there was more than enough head and legroom both front and back for my card-carrying, tree-topping family members. My rear passengers loved having their own climate control which certainly makes life much less stressful especially when you're toting around whiners who are always cold! I especially appreciated the Ridgeline's commanding view of the road and in pickups, this is oftentimes not the case. Impressive fit and finish throughout, the cab's interior design is truly refined. I couldn't help but love the bolstered seating that really does provide all-day comfort for achy backs and buns that don't fare all that well on road trips. Another nice feature worth noting is the 2.9-cubic-foot storage compartment under the folding rear seats and a locking glove compartment that is surprisingly still a novelty in so many vehicles. The Ridgeline has more than enough cupholders for a thirsty crew and nifty hiding places like large front door pockets and a deep center console to stash the stuff you don't want potential car crooks to peep. 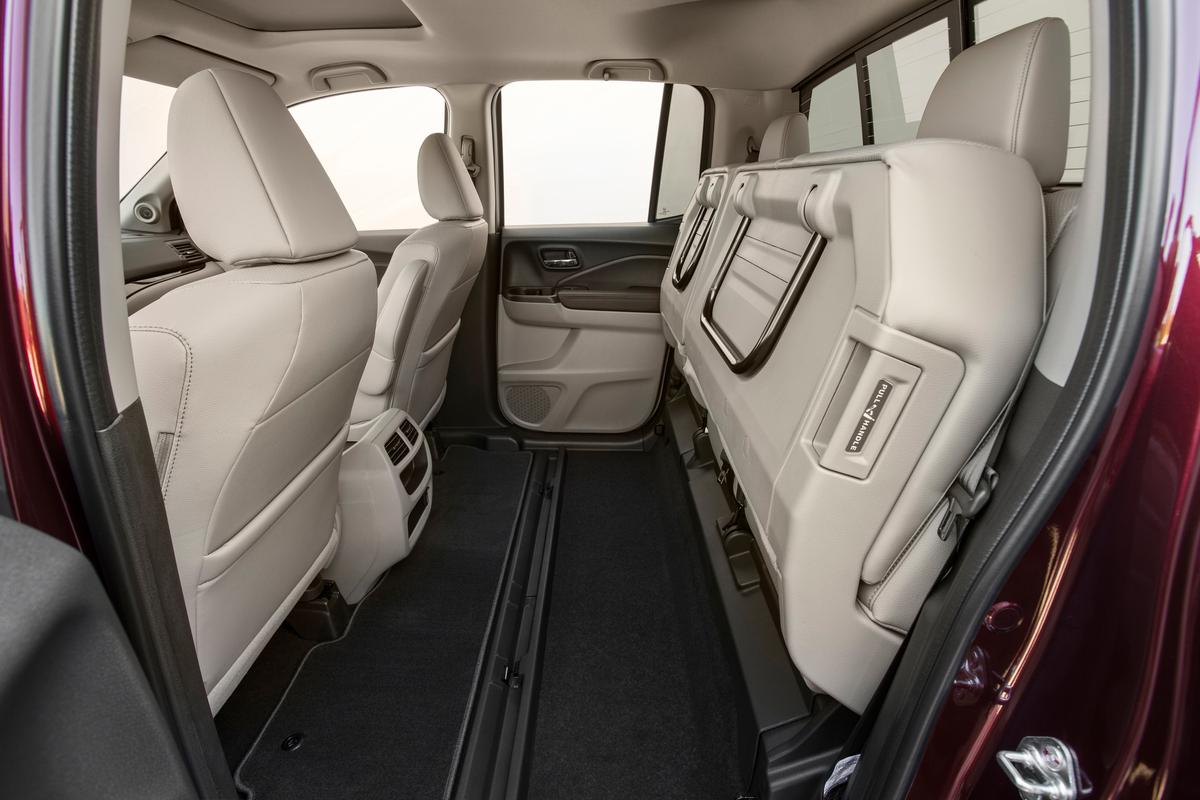 As far as technology, the Ridgeline has more than its fair share -Android Auto, Apple CarPlay and Pandora compatibility (available on higher trims) and Siri Eyes Free that lets you stay connected while on the road by sending texts, checking emails, and more with voice commands.

There are, however, a few tech wrinkles in the Ridgeline that made me want to literally kick the tires like the vehicle's Bluetooth system not wanting to make nice with my cell. I also had a shameful scream fest with the truck's 8-inch (4.2-inch is standard) color display infotainment system, in particular, the optional navigation system, that seemed to prefer the scenic as opposed to the quickest route. The array of controls on the steering wheel did look a bit off-putting at first but I managed to get the hang of them. Speaking of the steering wheel, the Ridgeline's is tilt/telescopic and can be offered with a heating feature that I found to be oh-so-soothing for my frosty hands on bitter cold days. A USB port is also a godsend in my eyes and Honda offers a second in the truck, as an option.

Driving the five-seater was not a shake, rattle and roll experience thanks to its four-wheel independent suspension and unibody construction (test vehicle—RTL-E). Again, I had to constantly remind myself, I was in a pickup and not a sedan. Ponderous? Hardly! The Ridgeline is a smooth operator; the ride was cushioned particularly when hitting those rough construction land mines. During highway passing maneuvers, the Ridgeline is quick, agile, its 3.5 liter, V6 engine that kicks out 280 horsepower and 262 lb-ft of torque delivers more than enough punch. Traversing the twisties in the truck was truly effortless and with practically no body lean. The vehicle's steering is responsive and offers good feedback, its braking is firm. As far as towing capacity, however, the Ridgeline's capability is limited compared to its rivals ( Chevy Colorado, Toyota Tacoma) topping out at 5,000 pounds, with a maximum payload of 1,584 pounds (varies by trim). At the pumps, the Ridgeline does have in common with its trucky brethren less than stellar gas mileage, coming in at 19 city/26 highway. Standard on the Ridgeline is a six-speed automatic transmission and front-wheel drive; all-wheel drive is also available. The pickup is also offered in seven trims, RT, RTS, Sport, RTL, RTL-T, RTL-E and the Black Edition.

Recently named the 2017 North American Truck of the Year, the Ridgeline does not fall short when it comes to safety, earning a best possible 5-Star Overall Vehicle Rating from the National Highway Traffic Safety Administration and a Top Safety Pick+ award from the Insurance Institute for Highway Safety. The Ridgeline's safety standards include ABS with brake assist and hill-start assist, airbags for all outboard seating positions, tire-pressure monitoring system with real-time display of individual tire pressures and a rearview camera. The gotta have Honda Sensing suite of driver assistance technologies is also an available option for the pickup that includes collision mitigation braking, lane departure warning, forward-collision warning, lane-keep assist, road departure mitigation, and adaptive cruise control.

The 2017 Honda Ridgeline can go from loyal workhorse to cushy family hauler but as far as it being categorized as a macho, Texas-style, real roughneck on four wheels, not so much. The Ridgeline, however, is a gentleman with manners and pickup capabilities that is also practical, comfortable, easy on the eye and as much truck as any average suburbanite would ever need.