When you have the right resources and expertise, it's possible to do just about anything you want. In the case of Nissan, the company decided it wanted a hard-core off-road vehicle based on its garden variety NV 2500HD cargo van. With the help of Ian Johnson, host of the TV show Xtreme Off-Road, Nissan got exactly that in the form of the NV Cargo X. But not without replacing much of the NV 2500HD.

While the body and frame are still NV 2500HD standard equipment, many other elements are swapped out. Under the hood is the Titan XD's Cummins 5.0-liter V8 diesel, and it makes the standard 310 horsepower and 555 lb-ft of torque. It's coupled to the Titan's 6-speed automatic and four-wheel-drive system.

The NV Cargo X's van body and truck powertrain ride atop a thoroughly reworked suspension. Nissan fitted heavy-duty leaf-springs and shocks to the rear, and ditched the van's independent front suspension altogether. In its place is a coil-sprung front axle. The suspension raises the ride height in order to fit the huge 37-inch off-road tires. In total, the van has 22 inches of ground clearance.

No wild off-roader would be complete without a collection of practical trail accessories, of which the NV Cargo X has plenty. A trio of LED auxiliary lights were added to the front, right A-pillar, and a tough tube-frame bumper with a skid plate was fitted to the nose. The bumper also contains a 10,000-pound winch for clearing debris or getting out of particularly tricky spots. Inside, the van's copious cargo bay is filled with a full-size 37-inch spare, recovery equipment, high-lift jack, a welder, tools, and compressed air.

As awesome as the NV Cargo X is, and even with all of the mass-produced Nissan components used, don't expect to see Nissan offering a factory-built version. However, if you want to see the van for yourself, it will be at the Chicago auto show. Ian Johnson will also make an appearance at the show on Saturday, February 11. 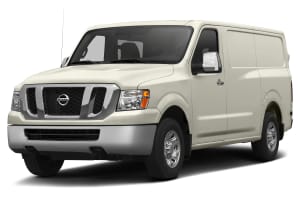