Like its iconic predecessor, the second-generation Acura NSX blazes trails. The old NSX proved that you could get reliability and daily use from an exotic car, and subsequently changed the automotive world. Acura's engineers pushed in a new direction for the prodigal successor: technology. And so the new NSX sets a new bar in the way technology is used to achieve speed.

The highlight here is the Sport Hybrid SH-AWD system, which supplements the 500-horsepower twin-turbo V6 with three electric motors, making 573 peak ponies. The two front motors each act on a front wheel, doing all kinds of tricks to help the car corner faster, brake harder, and accelerate like the proverbial cannon shot. They help make the NSX more stable at high speed, and let you sneak up on unsuspecting video producers at low speed. Then there's the third motor sandwiched between the engine and nine-speed transmission, which never lets a shift go by without filling in the milliseconds with velvety torque. If the all-wheel-drive hybrid supercar sounds familiar, yes, Porsche did something similar with the 918 Spyder. But even when you load the options on the NSX (try not to, we dare you), it's never more than a fifth the price of the Porsche.

Then there are the little details, like a new form of casting Honda engineers developed for the NSX's crash structure. Or the three-dimensional bend to the A-pillar and roof rail that makes it less obstructive to the driver and also stronger. Even the Marysville, Ohio factory gets some credit here, with 12 patents filed relating to the assembly process.

There's only so much a driver can do with two hands and two feet. The NSX takes your inputs and figures out how to maximize the contribution from each individual wheel. This is a car that harnesses all the greatness of technology to change what's possible in a sports car. 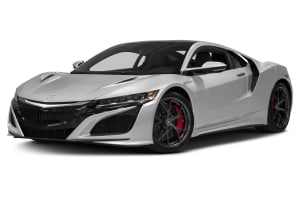