If things keep progressing in this direction, it won't be long before BMW needs a new slogan. "The Ultimate Driving Machine" only makes sense when the ultimate vehicular achievement is a car tailored solely for driving enjoyment. These days, BMW is just as focused as any other automaker on building cars packed with technology to take control away from the driver, putting it into the hands of high-tech computers, sensors, and software code.

But the industry currently only has one foot into the autonomobile revolution pool. For now, all those fancy self-driving aids still have buttons, which means the driver must choose to turn them on (or at can at least turn them off). The challenge for car companies, then, is to be at the forefront of technological advancement while still building cars that appeal to driving enthusiasts. In many ways and with varying degrees of success, BMW's latest 5 Series sedan walks a fine line between engagement and, for lack of a better term, disengagement.

BMW didn't make this seventh-generation 5 Series any larger than the model it replaces. It's also up to (depending on trim) 137 pounds lighter than the sixth-generation car, thanks to the use of magnesium and aluminum in the structure. That chassis is covered in bodywork that makes the 5 Series look like a slightly shrunken 7 Series, except that the 5er's deeply creased shoulders attract our eyes up and away from the lower hockey stick, which is a good thing. The head- and taillights are discreetly designed, with eye-catching LED lighting elements. 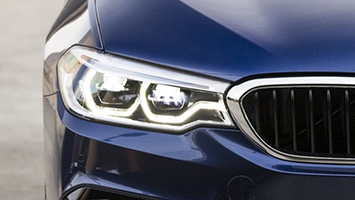 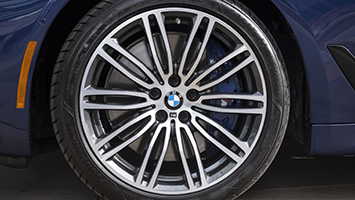 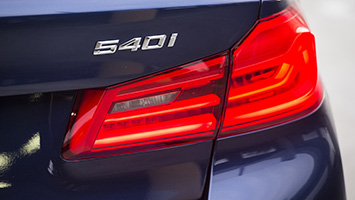 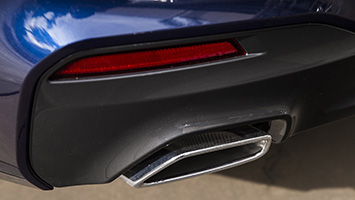 From the driver's seat, the 2017 5 Series follows BMW's tradition of restraint. Simple round dials sit front and center. The inner quarter of those dials is part of an LCD cluster that mostly mimics the look of traditional gauges. Everything is canted slightly toward the driver, from the 10.25-inch screen atop the center stack to the buttons and dials that make up the climate and audio control interface. One demerit: all those buttons and dials are tiny and difficult to distinguish with a quick glance. Of course, the latest version of iDrive means anything you can do with a physical button can also be done using the car's electronic interface.

This sixth generation of iDrive is pretty straightforward in operation. Touchscreen controls trickle down from the 7 Series, offering pinch-to-zoom and swiping functionality in addition to the well-known circular control knob on the center console. BMW's latest head-up display and gesture control also filter from the 7 to the 5 for 2017. The HUD is useful, large, full color, and high-definition. The gesture controls are less so, allowing drivers to accept or reject phone calls with a flick of the wrist or adjust the audio volume by twirling a finger in the air. Apple CarPlay is a $300 option, but Android Auto isn't available. Check out the video below for a quick demonstration of iDrive 6.0, and stick around for virtual walkarounds of the 530i and 540i models. 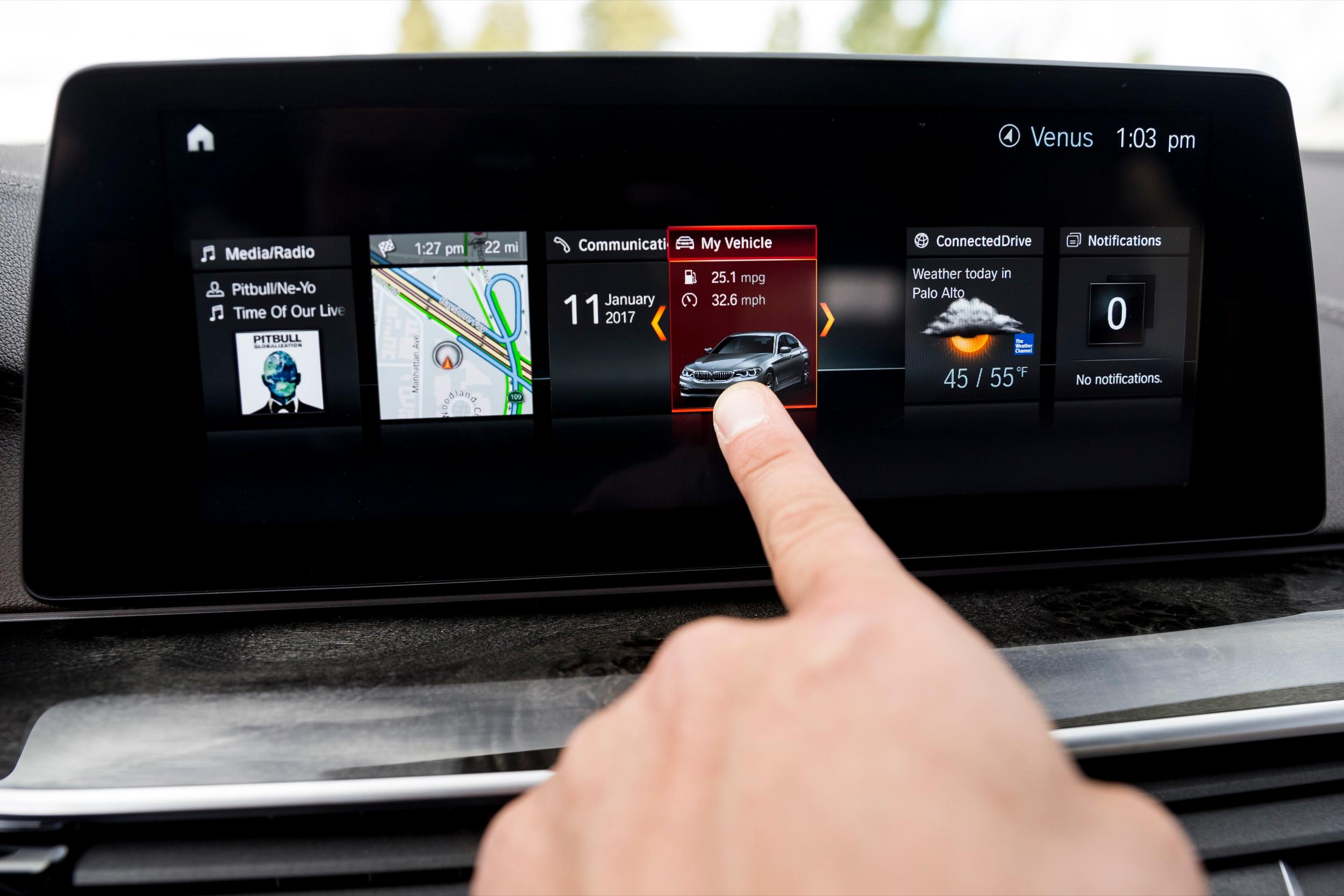 For $52,195, the 2017 BMW 530i is powered by a 2.0-liter turbocharged four-cylinder that puts out 248 horsepower and 258 pound-feet of torque. An eight-speed automatic is geared to make the most out of those ponies, getting the engine into the meat of its power quickly from a dead stop. The run to 60 takes 6 seconds flat, which is quick enough. Passing power, on the other hand, can sometimes lag as the turbos spool up. Those wanting more grunt can step up to the 540i and its 3.0-liter turbocharged inline-six for $57,445. That engine's 335 hp and 332 lb-ft push the 5 Series to 60 in 4.9 seconds, and its additional displacement over the 530i makes it feel more responsive at highway speeds.

Both the 530i and 540i can be ordered with xDrive all-wheel drive for an additional $2,300, which cuts two-tenths of a second off either model's 0-60 time. Also optional is an M Sport Package that lowers the suspension a bit and upgrades the wheels from 18 to 19 inches. Dynamic Damper Control allows the driver to choose softer or firmer settings, and either way automatically adjusts the suspension to the current road conditions. Active roll stabilization comes with the high-tech dampers, and it helps to keep body roll in check.

There's a marked difference between the Comfort, Sport, and Eco modes of the Driving Dynamics Control system. Steering feel and throttle response immediately tighten up in Sport mode, and that couples well with the transmission's own Sport mode that quickens shifts and holds onto gears nicely. Naturally, paddles on the steering wheel allow manual control of the transmission. 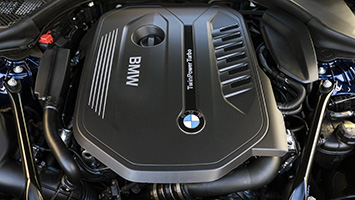 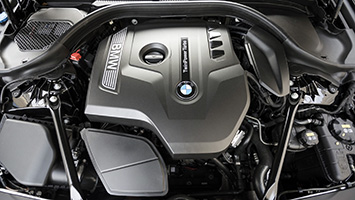 All of those electronic packages work, but they mean the driving experience always feels a bit artificial in both the 530i and 540i. We weren't able to test a 5 Series model that didn't have all those gizmos, leaving us to wonder if the most rewarding model might be the one without electronic aids. In any case, enthusiasts may be more interested in the upcoming M550i xDrive, which will be quicker than the previous M5 thanks to its twin-turbo 4.4-liter V8 engine with 456 hp and 480 lb-ft. Or even the M5 that's sure to follow shortly behind.

The 2017 BMW 5 Series also gets semi-autonomous drive modes. Active Cruise Control with Stop & Go (yes, that's actually what BMW calls it) does exactly what it sounds like, and it works from 0 to 130 miles per hour (thanks, Autobahn!). Lane Departure Warning, Active Lane Keeping Assistant, and Traffic Jam Assistant conspire to keep the car in its proper lane, unless the Side Collision Avoidance system detects a car merging into you, in which case it will try to steer you out of danger. Fortunately, we never had to test that feature. We also never experienced the so-called Evasion Aid, which will help steer you around an unexpected obstacle in your path at speeds up to 100 mph. 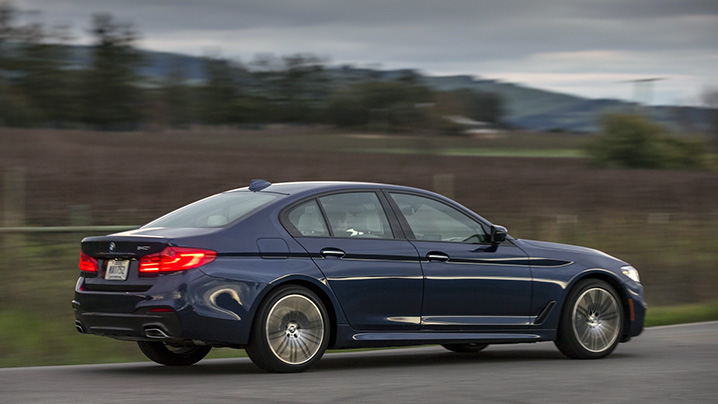 In practice, you definitely don't ever want to take your hands off the steering wheel no matter what semi-autonomous tech the 2017 BMW 5 Series you're driving may have. We tested these systems repeatedly and found that they'll keep you in your lane under most conditions, but allow the car to veer from one side to the other more than we'd like, even when the road is straight, and fail outright in challenging situations. A BMW spokesperson told us to think of steering assist as a driver aid, not as any sort of autonomy. Still, the Drive Pilot tech used by Mercedes-Benz in the latest E-Class feels much more robust in practice.

We prefer to drive ourselves, anyway, and it might not be fair to give BMW too big a demerit for a lackluster semi-autonomous driving experience because a BMW is supposed to be about the interaction between the driver and the car. But this is 2017, and a large swath of luxury car buyers are going to expect their brand-new premium sedan to offer driver-assistance aids, for better or for worse. And that's especially true when it doesn't come cheap – a fully loaded 5 Series with all the luxury and assistance packages can cost up near $100,000.

Here's hoping BMW can perfect its self-driving tech by 2021, which is when the German automaker plans to launch its first fully autonomous vehicle. But we also hope that all this gadgetry doesn't spoil the actual driving experience of mainstream models like the 5 Series. Because "The Ultimate Self-Driving Machine" just doesn't have the same ring to it, and, at least for now, the 5 Series still lives up to the brand's original tagline.