This is the 2018 Ford Mustang – a restyled, tweaked, and up-contented version of the pony car we've been enjoying since it ditched its stick axle back in 2014. As far as mid-cycle refreshes go, this one wins on some tangible aspects, but the subjective aspects are, well, subjective. And the V6 is kaput. It's not a huge surprise, but more on that later.

Let's start with the new front-end styling by way of comparing it to the old car. The 2015 Ford Mustang was a polarizing design, although most of the criticism was about it being derivative rather than unattractive. It was a handsome beast, aggressive and yet classy. You might even say that the focus was at the time to make a product that would appeal to a global audience. Ford succeeded, and (as Ford likes to loudly boast) the Mustang is the top-selling sportscar worldwide.

It seems like the main design brief for the '18 Mustang, to a biased eye well-steeped in the '15 Mustang styling "controversy", is to banish the internet troll cry of " Fusion coupe!" once and for all. The nose drops precipitously – without a measuring tape and with a bad theoretical ruler, I'd say a couple of inches. Ford showed us a presentation with a split-in-half render, the new and old car side-by-side. The old car's nose looks terribly blocky and tall by comparison. In profile, it's definitely an improvement.

Some of the front-end changes are aero tweaks, working together to drop the coefficient of drag as well as to better balance lift front and rear at higher speeds. No one was talking numbers – Ford loves to hold stuff back, dribbling it out a few drops at a time – so stay tuned for specifics. The Ford guys were quick to assure us that the changes will be quantifiable and substantive. Sprinkle a grain of salt on that.

The headlights, however, change shape drastically. Rather than the aggressive glare of the '15's scalloped headlights, the '18 goes to an "eagle's head" shape that looks more deeply inset. They remind me a bit of the front-end redesign that the original Mustang underwent in 1967 that traded some timeless character for a more contemporary vibe. Like the '67 cars, I think it looks less attractive in lower trims but should come into its own once we see the restyled Shelby G350 (or better, the rumored GT500).

Three new colors help flesh out the '67 Mustang analogy. There's Royal Crimson, a dark maroon that is a throwback to (but not exact match for) the '67 Vintage Burgundy color. The other two new colors are Kona Blue and Orange Fury, which the car Ford displayed to us was painted. Other cosmetic tweaks include a new stripe offset stripe package in white or black, and a black rear decklid applique for all trims and models. Out back, the taillights look very similar from a distance, but the individual "gills" take on a pronounced C-shape in profile. There are also a total of 10 new wheel designs, 12 in total, including several wheels that are stand-alone options.

Inside, materials (at least in the premium trims) get plusher in most of the right places. For example, the door rollover (where you'd rest your arm on the sill, if it wasn't so high) gets some soft padding, as does the center console and the new knee bolsters on the side of said console. The engine start button is now spun aluminum, and it feels nice. The premium-trim seats get some blue or red accent trimming. It classes up the joint. 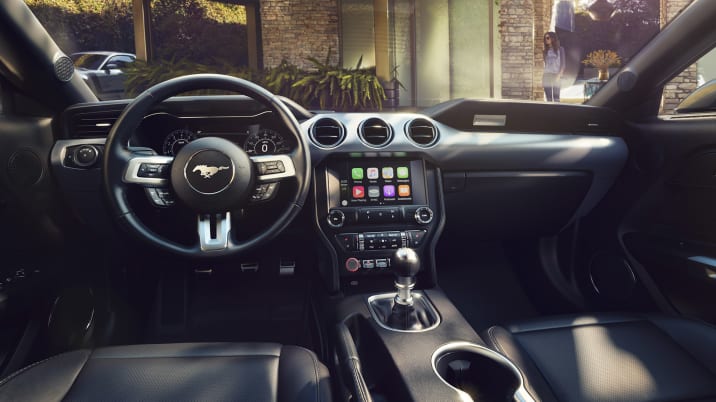 The real party trick inside is the optional 12-inch fully digital gauge cluster and its various display modes. A brief video presentation showed all the major display modes, which drastically change the position of the various instruments and secondary information. There is a traditional view, with two round gauges, and there are other display types that a utilize bar-style tachometer and numerical speedo readout. While the various gauge display modes are keyed to the basic drive modes (Normal, Sport, and Track), the driver will also be able to override and select whichever one they like. Track apps will also have more real estate on the display to take over. We don't have images and descriptions of all the functions and display times at this time, but surely there will be a detailed video closer to roll-out.

Ford's also using this occasion to introduce what it calls MyMode, which is a little like the "Individual" drive mode setting on a Mercedes-Benz. Basically, it stores your selections for drive mode, the suspension setting, steering preferences, the active exhaust valve behavior, and other preferences so you don't have to reselect them every time. It's selected with the steering wheel controls and the main gauge display.

The engine changes are minimal, other than the loss of the V6 that has finally been retired after the indignity of serving mainly the rental car fleets in bare bones trim for the last few years. It didn't have to be like this; At one point, the old V6s with the Track Pack (later called, for whatever reason, Mayhem Mustangs) had decent power and great suspensions. With the ascendancy of the EcoBoost, the V6 has been taken behind the barn and unceremoniously shot. Well, no one will miss it in its most recent incarnation, so that's that.

About that EcoBoost 2.3-liter I4, it's getting a torque bump significant enough to merit transmission revisions to handle it. Ford says the extra torque comes from its limited-duration overboost function, so it's something only appreciable a few seconds at a time, but it's there. The V8, on the other hand, gets more significant changes: increased compression and a dual injector (port- and direct-injection) setup – a technique Ford also uses on its 3.5-liter V6s, for a variety of reasons such as preventing carbon buildup on the valves. The V8, Ford promises, will rev higher and quicker than before. For both engines, Ford wouldn't discuss numbers (sense a theme here?) and didn't necessarily state that either engine would produce more horsepower. Again, stay tuned.

There are more transmission changes beyond the beefed up EcoBoost manual. The V8 manual gains a twin-disk clutch and a dual-mass flywheel, and both engines will be available with the new 10-speed auto that was co-developed with GM. Yes, Mustangs and Camaros will share bits! Sort of. But it's good bar trivia to rile up your local thin-skinned FoMoCo or Bowtie partisan. In any event, the 10-speed will offer a shorter first gear and a wider overall spread when compared to the outgoing auto. It'll also stay in first gear for extra hard launches. Selecting Sport and Track mode will lock out 10 th gear and hold gears for longer, as you might imagine. Ford wouldn't say if the auto changed top speed significantly beyond reiterating that the 'Stang will be electronically limited.

There's good news in the handling department, too. All models get revised shocks, increased lateral stiffness, and revised stabilizer bars. Ford described the base suspension improvements as on par with the previous optional performance suspension. MagneRide will be an optional upgrade on any Mustang Performance Package – yes, that includes EcoBoost models with the PP. GT models with the Performance Pack will get new Michelin Pilot Sport 4 tires. That being said, don't expect the GT350 MagneRide tuning to carry over. The Performance Package MagneRide will be matched with, and tuned for, less spring to keep things civilized for daily driving.

GT models will get quad tip exhausts, and EcoBoost models with get twin tips. Optional active exhaust valves, which will be user-configurable, should add some rumble.

Beyond the handling and powertrain improvements, the '18 Mustang also gains a bunch of safety technologies keyed off of the addition of an optical camera to compliment the existing radar technologies. This enables new safety features for Mustang, like Pre-Collision Assist with pedestrian detection, distance alert, lane-departure warning, lane-keeping assist, and Driver Alert System. It won't offer the stop-and-go aspect of the adaptive cruise technology like Ford baked into the '17 Fusion. You can, however, start, lock, unlock, and find your Mustang with the FordPass smartphone app, available on Mustang for the first time.

That's the outline of what Ford has in store for us with the 2018 Mustang. We expect hard numbers and more in-depth information to come. If you're wondering when the '18 Mustang will go on sale, North American dealers should start selling it in this fall.