Less stressful than a taxi: We ride in Hyundai's Autonomous Ioniq Electric The day after California told Uber to halt the testing of its driverless cars, Hyundai gave us a brief ride in an autonomous Ioniq Electric. The trip was mostly uneventful — our driver/engineer didn't hit anyone, and, unlike Uber's, Hyundai's car didn't run any red lights. You may think that's faint praise, but at the speed of advancement we take nothing for granted. More than once during our ride around a pre-mapped, all-right-turn route in Las Vegas, the Ioniq had to sort things out for itself, and the longer you ride the more you realize the scope of data we humans process without noticing.

This Ioniq was identified only by its Korea-spec origins — dual charging ports for fast and regular recharge and no side marker lights — and Nevada's autonomous vehicle license plate. Tourists were completely unaware that it was driving itself.

The autonomous Ioniq uses one 140-degree and two 110-degree Ibeo LiDAR units in the front fascia, plus a camera array inside the cabin at the top of the windshield. A single camera is used for traffic-light detection, with stereo units for the driving assistants. According to Hyundai, the autonomous gear detects objects knee-high but also will not drive into a low-hanging tree branch. We're also told the system works in rain and snow, citing the all-conditions approval certificate from Nevada, though that center front sensor looks prime for snow packing in heavy stuff. 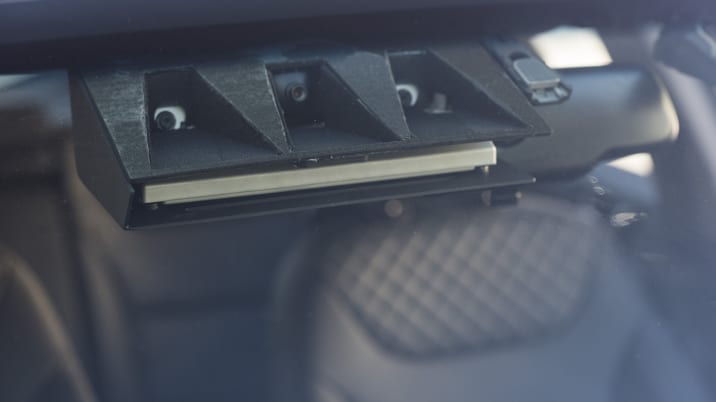 Essentially, one processor collects all the input data and combines it to a singular view, and a second processor tells the car what to do about it. Hyundai notes that minimal system power consumption was a primary target. The cabin sports the prototype-standard large red kill switch, an extra display atop the center of the dash, and two real-time monitors hanging behind the rear seats. The dash display is there so human drivers know the car is aware of its surroundings — it shows traffic lights as red or green (yellow is not detected but it will not panic stop if it loses a green light), speed limit, vehicle speed, route, a steering wheel to denote autonomous operation, and pedestrians detected. One rear monitor shows what the traffic-light camera sees, the other what the LiDAR units are picking up, from road curbs to people, vehicles and buildings.

The ride experience is drama-free if a bit on the cautious side. Braking is often moderate to heavy, more on/off than the modulation range of many human drivers, but we felt no panic braking or ABS intervention. The steering wheel ratchets through turns in what appear to be three- or four-degree increments, then calculates that's not enough, and adds more or less as needed. That kind of steering movement is a curious thing to watch, and likely not the most energy-efficient or easiest on tires, but it wasn't abrupt enough to transfer lateral motion or head-toss to occupants. Once the car has satisfied itself the road is clear, acceleration to the limit is electric-car crisp, effortless. and quiet.

During our ride, the car signaled appropriately, always used the correct lane, and stayed within the lines even on poorly marked curving roads (no lane changes on this route) and dutifully motored past Las Vegas's finest at the posted speed limit. The only potentially illegal move was a right turn with pedestrians in the marked crosswalk eight lanes away. At our speed they'd have had plenty of time to move aside if they were closer, and with that distance and a center divider the move didn't seem the least bit unsafe, especially with the two regular cars behind following suit. 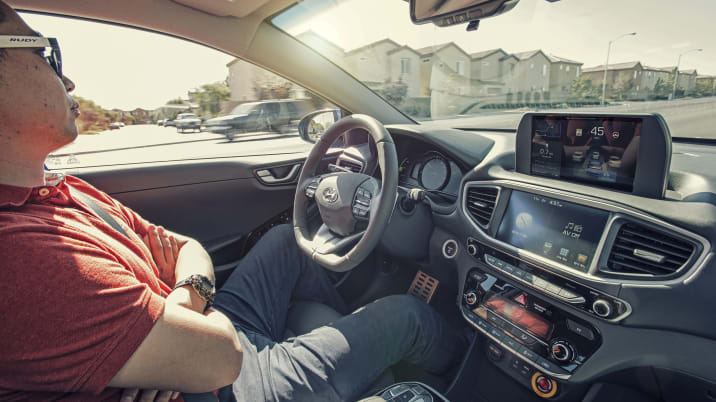 Observing from inside the cabin, the details and variety of situations the car faces become more focused. Much of the process is dependent on the accuracy and detail of the mapping the car's using, so a dip in the road or rough railroad crossing might be done faster than a human thinking about comfort or suspension longevity. It has to know if a left-turn arrow has a no-U-turn limitation, as this car did and calculated properly. It does not have the ability to separate more-dangerous pedestrians — those holding a phone or ranting at nothing in particular — and it does not have capacity to detect strobes, warning beacons, or sirens on approaching emergency vehicles. When stopped behind a pickup where the camera could see the red light but nothing below it, we wondered how long it would wait after the red light goes out before honking.

Any pricing info is a long way out, and we don't have an answer as to whether the self-driving Ioniq would aim to preserve the driver or pedestrian(s) outside the vehicle if it had to choose one or the other. If you're paying for livery service you would expect a faster, smoother ride, but this was far less stressful than the last taxi ride we took.