After showing an image of the Fiesta ST-Line earlier today on Twitter, Ford of Europe has unveiled the rest of the subcompact line-up. Four trim levels were shown, and one of them takes the Fiesta where it has never gone before.

That trim is the Active, and it further proves that no car is safe from being turned into a crossover. Though no specifics were given on whether it would have a unique suspension or drivetrain, some obvious design differences can be seen. It gets the requisite black plastic fender flares, side skirts, and bumper trim. The side skirts and bumpers also get skid plate-inspired metal-look trim as well. The Active also gets slightly raised roof rails.

The reveal of the Active trim also raises the question of whether it will come to the US. Ford has already announced that the Fiesta-based EcoSport subcompact crossover will come to America, and naturally it's roughly Fiesta-sized. It's unclear at this point if the American hunger for crossovers would support two Fiesta-based jobs. 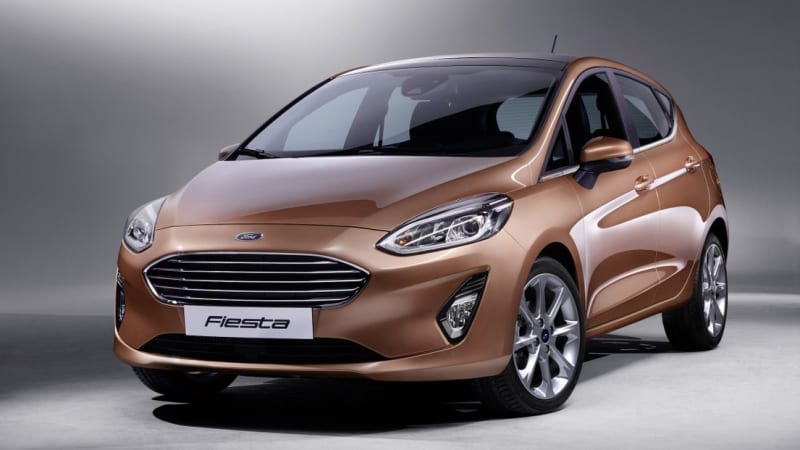 We saw the ST-Line earlier today, but we also got to see the Titanium and Vignale trims. Both the Vignale and ST-Line are preexisting European trim levels. The Vignale is a more luxurious and fashionable model, and the ST-Line provides Fiesta ST looks without the performance. The Titanium model is what we're probably going to see in the US, barring any minor changes. It features Ford's hexagonal corporate grille filled with chrome slats. It also has smaller grilles in the bumper, and the side grilles are oriented more vertically.

Ford did not provide many mechanical details. In Europe, it will be available with both gasoline and diesel engines with five- and six-speed transmissions, and Fiestas will now feature rear disc brakes across the line. One engine Ford did highlight is the 1.0-liter EcoBoost three-cylinder. This time around, the little inline-three features cylinder deactivation, though Ford didn't reveal how many cylinders are shut off when in use. At least we know it can't be more than two.

Inside, the Fiesta now offers a "floating" eight-inch touchscreen display. During the reveal, a Ford representative bragged about how it improves ergonomics and simplifies the interior by removing 20 buttons. We're not entirely sure that's a good thing based on our past experiences with touchscreen-heavy interfaces.

No availability or pricing was revealed. We believe the Fiesta will arrive in the US at about the same time as the EcoSport. This will probably be sometime in 2017, in time for the 2018 model year.