The Grand Tour hits the sophomore slump in episode two

Clarkson, Hammond, and May play soldier – hilarity does not ensue.

Brandon Turkus
Ahead of The Grand Tour's first episode, we recapped the final season of Top Gear featuring Jeremy Clarkson, James May, and Richard Hammond. Among its bright spots sat a few steaming piles of junk. We were particularly hard on the third episode, which saw the hosts modify a trio of vehicles to serve as ambulances.

Calling it the worst episode of the season and possibly one of the worst in TG history, we complained that the show "tried to do an hour of sketch comedy that just happened to involve some cars." The second installment of The Grand Tour attempted the same thing, but with fewer cars and riffs on Tom Cruise's 2014 film Edge of Tomorrow. Episode two isn't as bad as the ambulance show, but it's close.

Naturally, there are promising elements. Moving around the globe for each episode is a big part of The Grand Tour's appeal, because it blesses the hosts with new choices in beautiful scenery and a new host country to not-so-gently mock. This should bring a lot to the show, especially if this week's trip to South Africa is anything to go by. 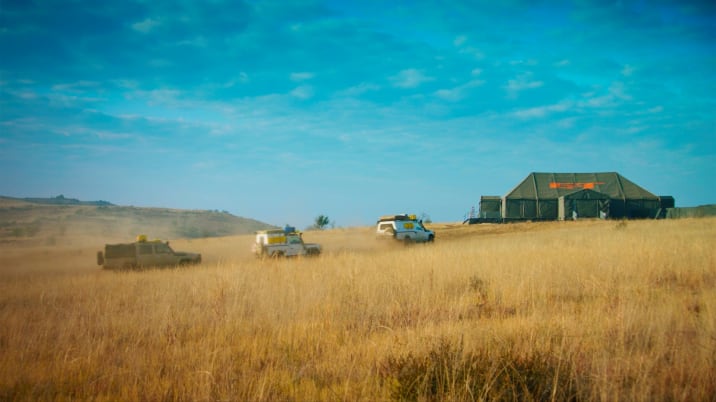 We got our first look this week at the show's new intro, which features scenes around Johannesburg and a trio of off-roaders. It's a solid, short, sweet opening, and we're eager to see how the title evolves as the hosts relocate the big tent around the globe. The opening studio segment, meanwhile, is itself an evolution on last week's opener, giving the hosts the opportunity to tease South African President Jacob Zuma's difficulty with numbers. The entire segment got strong, authentic-sounding laughs from the studio audience.

The move to South Africa also brought a new segment that Jeremy and Richard are calling – semi-seriously, we're guessing – "Making James May Do Something He Doesn't Want To Do." In the inaugural segment, James sets out to explore the South African art of spinning, or doing donuts in old BMWs until the tires burst. While spinning seems terribly unsafe, the idea of The Grand Tour exploring local automotive customs and fashions – in its own weird and confused way – is a keeper. That included this week's feature on a homemade Mercedes-Benz C9 Le Mans car. Really, if one thing excites us about The Grand Tour, it's the impact the studio location has on the material.

Jeremy's Aston Martin Vulcan segment, meanwhile, is our first look at the Eboladrome in a full vehicle test. This is a typical Clarkson review, in that it's entertaining, informative, and beautifully shot. Once again, we need to salute the high-quality video on Amazon – the color is rich and every detail seems to pop off the screen. 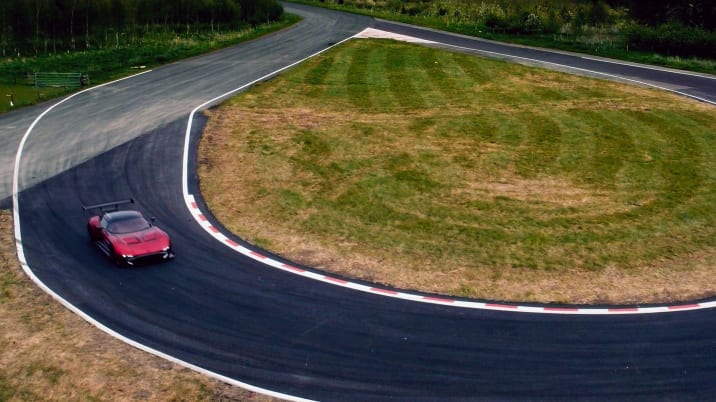 But the Vulcan test also showed problems. We don't dislike the show's new tame racing driver, The American, but the jury is still out – we're betting his stereotypical jokes will get old in the next few weeks. Mike Skinner's work aside, the Eboladrome is a bigger problem. Its most complex sections are simply too narrow for a vehicle like the Vulcan to run and still return an impressive lap time. In the Aston's case, it barely beat a road-going McLaren 650S – on the TG Test Track, we'd expect several seconds separating the two (even though the track-only Vulcan technically wouldn't be eligible on TG). The Grand Tour needs a more balanced track for power laps before they can carry the same authority as Top Gear's.

The far bigger issue in episode two is the basis for its name, Operation Desert Stumble. The two-part video takes the three stooges to a special forces training base in Jordan, where Executive Producer Andy Wilman challenges them to infiltrate a town, steal a car, get to an airport, take down a plane full of terrorists, rescue a VIP, and escape to an embassy. Like with the ambulance film, however, a promising concept falls by the wayside in favor of jokes, in this case Jeremy being molested by terrorists and James being repeatedly shot by a sniper. 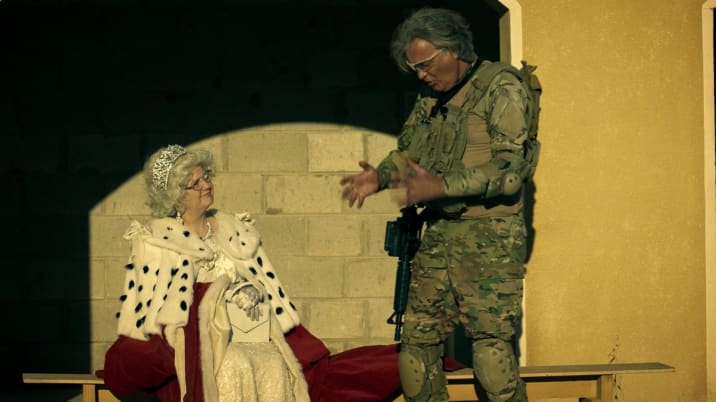 Better conceived and ultimately more entertaining than the ambulance film, Operation Desert Stumble has some authentically funny elements. Reviewing an Audi S8 Plus while dodging terrorist gunfire is good, and your author snorted in laughter when Hammond asked if he should tickle Jeremy to force him to exit a Blackhawk helicopter. There's some lampooning of war movie clichés, too, although Clarkson's bit with Samuel Barber's Adagio for Strings is a bit much. But the amusing parts and chemistry of the three hosts can only do so much with the material on offer. There's just so much deeply unfunny stuff here. A pantsless Clarkson gets blown up by a fragmentation grenade, and later, Hammond gets killed in a "knife fight." May, meanwhile, is a murderous bastard. He shoots Hammond – twice – and then executes the Queen of England.

And as for Celebrity Braincrash, it deserves a death far more gruesome than anything the team suffered during Operation Desert Stumble. This week, a "lion" mauls Charlize Theron. This may have to be our last mention of Celebrity Braincrash, because it's the worst television concept since the long-forgotten Top Gear Stunt Man.

Jeremy Clarkson warned us that cars wouldn't feature in this week's episode, and perhaps we should have listened. The Grand Tour, like Top Gear before it, is at its best when it does two things – the hosts share their screen time with the cars, and the script walks the line between primetime comedy and reality TV. Episode two is a reminder of these facts.
X