1.6 million. That's how many Q5s Audi has sold since the model's 2008 debut, making the agreeable but stylistically neutral sport-ute the best-selling premium SUV on the planet. One in four Audis sold is a Q5, which is a big part of why the German carmaker made significant improvements intended to ensure the 2018 Audi Q5 is another success story.

For starters, the Q5 has swollen in size. Not by much – we're talking 1.3 inches in length, half an inch in wheelbase, and incrementally more height – but enough to boost rear legroom by 0.39 inch and add 0.31 inch to rear headroom. If you're worried that curb weight has bloated in direct proportion to the larger footprint, fear not: The 2018 model is actually up to 198 pounds lighter than the model it replaces, thanks to a carefully modulated blend of high tensile steels and aluminum in the chassis, and incremental weight savings throughout. Two turbocharged engines are available: the Q5's 2.0-liter TFSI engine producing 252 horsepower and 273 pound-feet of torque (doing the 0-to-62-mph sprint in 6.4 seconds), and the SQ5's 3.0-liter TFSI mill that turns 354 hp and 369 lb-ft (capable of whisking it to 62 mph in 5.2 seconds). The 2.0-liter meets a new seven-speed dual-clutch S tronic transmission, while the beefier 3.0-liter gets a conventional eight-speed torque-converter-equipped gearbox to handle the higher torque.

Audi's new Quattro ultra setup (already seen in the A4 and Q7) offers fully variable torque distribution that helps achieve 20/27 mpg with the 2.0-liter and 18/26 mpg for the 3.0-liter. The system can de-couple the rear axle via an electronic clutch, which improves fuel economy; with 100 percent of torque directed to the front wheels during straight-line driving, the parasitic losses of running power needlessly through the rear differential are avoided, while a second clutch controls front/rear torque distribution. Audi says the ultra setup works proactively, not reactively, using torque vectoring to distribute power and anticipating changes in vehicle dynamics 500 milliseconds before the torque is redistributed. 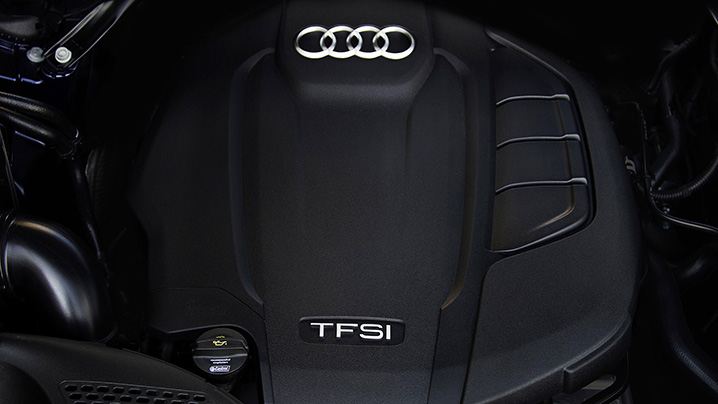 While there are numerous tech updates under the skin, the body itself is very familiar. In person, the Q5's looks are tweaked ever-so-slightly thanks primarily to a curvier, crisper character line that is so sharp, it casts its own shadow under certain lighting conditions. Inside, a Q7-like upgrade gives the cabin a more sophisticated feel.

Audi held the Q5 first drive in Cabo San Lucas, Mexico, but not for the reasons you're thinking. Sure, it's a vacation-worthy destination replete with azure coastal roads and delightfully lawless stretches of open highway. But the less obvious reason for the locale is its proximity to Audi's new factory, which opened days before in Puebla, across the sea of Cortez and several hundred miles inland. Q5s will be built at the $1.3 billion plant, which is Audi's first in Mexico. If all goes as planned, up to 160,000 cars can be built there, including other global models. Incidentally, global Q5 production will be based there, though Chinese-market cars will be manufactured in an Audi plant in China.

Back at the (admittedly sexier) Cabo San Lucas location, the drive started in a pre-production 2.0-liter model with a curious combination of options: pleasant S-line trim with quilted leather seats, but a manually adjustable steering wheel and seats. The new Q5's interior is a tidy and nicely outfitted space, with upscale, modern-feeling options like a choice of open-pore wood or real aluminum trim, and techy bits like the Q7-style electronic shift knob and the so-called Virtual Cockpit, which replaces traditional analog gauges with a slick, customizable 12.3-inch TFT screen. An available 8.3-inch center multimedia screen is operated via an MMI wheel, hard buttons (with haptic feedback), and a touchpad that enables handwriting and pinch-zoom functionality. The rear seats are adequately spacious for most normally sized adults, while the rear cargo area grows 0.4 cubic feet, to 21.5 cubic feet. 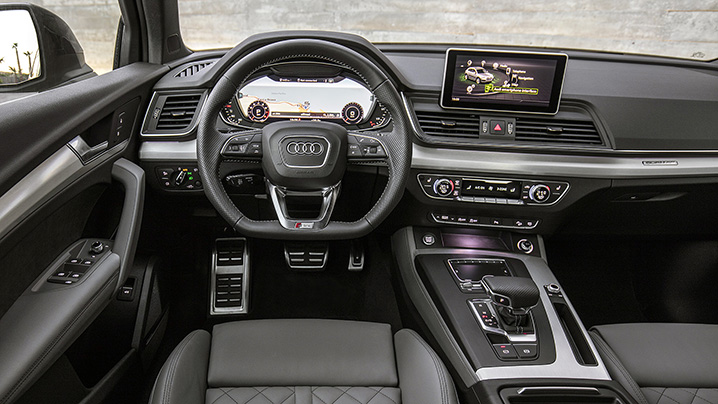 Though Audi claims its turbo four-cylinder engine sounds better than its predecessor, don't hold your breath for an R8-like roar; this four-banger has a perfectly fine exhaust note, but nothing worth writing home about. More notable, however, is the smoother-shifting dual-clutch transmission, which works invisibly to lay down power to the road and helps propel the Q5 ahead with ease when the right pedal is buried. Acceleration is responsive and reasonably strong, though the upper registers of the rev band aren't quite as beefy as the midrange. At highway speeds, there's a nice, quiet hush in the cabin that makes long-distance drives (like this six-hour stint in Mexico) untaxing.

While US-spec Q5s will be available with fixed steel-spring suspensions with or without adjustable dampers, only SQ5s will be available with the air suspension system we experienced in a regular Q5 built for a different market. That lack of availability is a shame for an SUV described as premium. During both on- and off-road driving, the air suspension delivered a smooth, controlled ride that made the Q5 feel like a bigger, longer-wheelbase, and pricier SUV. Dash-mounted Drive Select buttons enable switching modes to control parameters like steering weight and throttle response, and the air suspension is appropriately responsive to setting changes, transforming from magic carpet-like softness over bumpy bits to a stiffer, more controlled persona (with an appropriately lower ride height) on smoother surfaces. It was easy to drive the Q5 fast over the twisting bits, with body roll kept in check and steering providing enough feedback to inspire confidence. If you want more involvement, the steering-wheel paddles elicit quick yet smooth gearshifts. 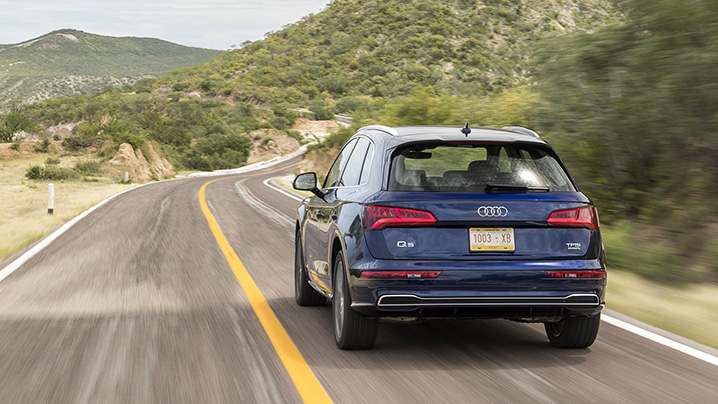 One stretch of rutted trails revealed impressive capability and adaptability from the suspension that will only be available on SQ5s. Again, air suspension had an unfair advantage over lesser setups, delivering a surprising amount of travel and articulation over some rather nasty bumps. Later in the day, our convoy of Q5s stopped for a break at a sandy basin near the beach. Given the permissiveness of our hosts (and the absence of law enforcement), we took the opportunity to hoon things up with some donuts across the low-friction surface. The impulse was juvenile, but the findings were revealing: crank the wheel and gun the throttle, and the torque vectoring driveline shoots the Q5 where you aim it, not on the sloppy, understeer-dominated trajectory most small crossovers would respond with. The pleasant surprise here is the fact that the Q5 pulled tail-happy powerslides and can also remain efficiently mild-mannered (and 100% front-drive) during otherwise sedate highway cruising. Bravo, Audi, for not succumbing to soul-sapping dynamics in the interest of efficiency.

Though we can only speculate how the US-spec Q5 suspensions perform, the rest of this crossover feels capable, thoughtfully designed, and well put together – and importantly, with a powertrain that supports a broad variety of driving habits, from low-consumption commutes to irresponsible, tire-spinning romps. If our drive along the Baja California coast is any indication, Audi's new south-of-the-border factory should stay very busy churning out second-gen Q5s.