We'd love to tell you that the incremental upgrades bestowed upon Toyota's rear-wheel-drive coupe as it made its transition from Scion FR-S to Toyota 86 have transformed it into a perfect sportscar. If only a few more horsepower, shorter rear-end gearing, and tiny aero updates were enough to quell all the complaints that enthusiasts have leveled at the machine since the platform first hit the road in 2012, this review would have been so much more satisfying to write. Sadly, that's not the case.

Don't get us wrong. The 86 is still extremely fun to toss around a twisty road. The chassis is impressively balanced, the steering is direct, and the shifter is sweet. Sorry to impart upon you this well-worn trope, but the old adage that it's more fun to drive a slow car fast than it is to drive a fast car slow is, in this case, completely accurate. The 2017 Toyota 86 is nothing if not entertaining. But it's not completely new. It hasn't been transformed. It is, in the end, the same as it ever was.

It will take about three minutes of your time to watch the videos below, in which we cover pretty much everything that's new for the 2017 Toyota 86.


Toyota 86s equipped with manual transmissions get a five-pony boost to 205 horsepower and 156 pound-feet of torque. Automatic models soldier forth with a carryover 2.0-liter four-cylinder that puts out 200 hp and 151 lb-ft. Apparently, more than half of Scion FR-S buyers chose the automatic. That's unfortunate, as it drains a good deal of the fun out of the 86 experience. Choose the manual and you'll be rewarded with an easy clutch and a rewarding short-throw shifter. And, as we said, five more ponies, courtesy of intake and exhaust tweaks and the polishing of some internal engine components. The only upside to the automatic is improved fuel economy of 24 miles per gallon in the city and 32 on the highway. Manual 86s are EPA-rated at 21/28. 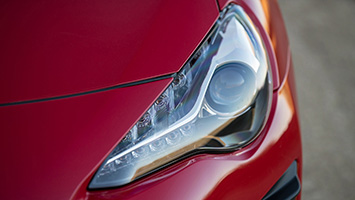 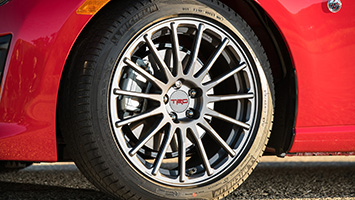 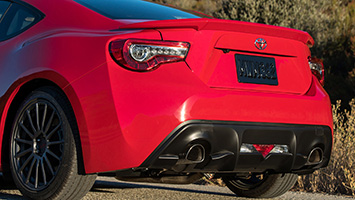 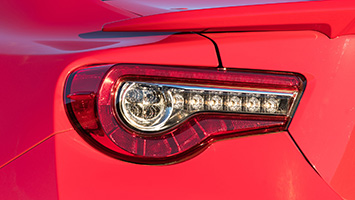 Along with the small bump in power, the 2017 86 gets a 4.3:1 rear-end gear ratio in lieu of the old 4.1:1 unit. That ought to translate into a small improvement in acceleration that really only matters on paper. In the real world, on actual roads, the difference is negligible. To eke the most out of the 86, you have to constantly work the shifter and keep the engine north of 5,000 rpm. It's still not particularly quick, but it's definitely fun.

There's plenty of noise inside the 86, from the wind, the road, and the engine. Considering its purpose as a low-cost sportscar, the 86's interior din isn't the end of the world. The 86 gets revised spring rates and damping all around, and a thicker anti-roll bar at the rear. It's not a night-and-day difference from the old suspension setup, but the rear of the car feels a bit more planted on rough roads and with steep steering angles. Its low weight of 2,758 pounds keeps the 86 feeling nimble and light on its 215/45R17 Michelin Primacy tires.

Okay, so the 2017 Toyota 86 feels about the same as the 2016 Scion FR-S did from behind the wheel. It doesn't look very different, either. There's a mild facelift, a bunch of Toyota and 86 badges inside and out, and LED lighting elements front and rear. Toyota engineers insist that the tiny vortex generators at the top of the fenders have some beneficial effect on aerodynamics, but it's got to be minimal. Same with the little strakes on either side of the front fascia, which sort of remind us of an '80s Testarossa. And not in a good way. 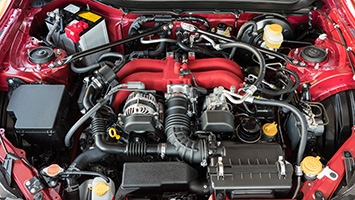 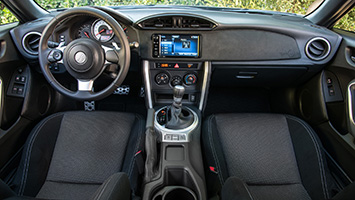 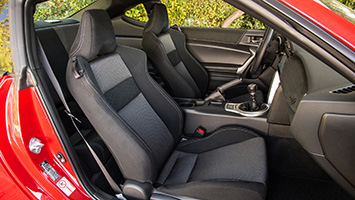 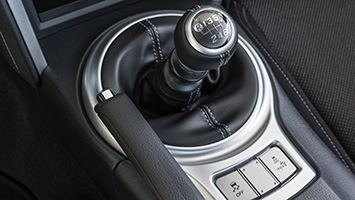 Toyota did away with the red stitching inside the FR-S, choosing a silvery shade instead for the 86. There's a suede-like textile atop the door panels and the passenger side of the dash that looks and feels better than the plastic of previous models. The fabric also cuts down on interior glare. The steering wheel is three millimeters smaller in diameter than before, but Toyota still found room to add buttons for the audio system. As before, that audio system is controlled through a seven-inch touchscreen LCD that suffers from irritating glare in uneven lighting and washes out in direct sunlight. Toyota has no plans to offer Apple CarPay or Android Auto in the 86.

It's definitely worth nothing that every single one of the beneficial updates we've covered in this review can also be found inside the 2017 Subaru BRZ. From the five-pony increase (signified on both the Toyota and the Subaru by a red intake manifold) to the rear differential gearing, the 86 remains a carbon copy of the BRZ. Except that the BRZ gets an optional Performance Package with Brembo brakes and Sachs ZF dampers that Toyota's TRD accessories catalog can't match.

As a cohesive package that prioritizes driving enjoyment beyond all else, the 2017 Toyota 86 shines. It rides and handles very well, and its starting price of $27,120 sounds reasonable. But it's still underpowered, especially when compared to something like the Ford Mustang EcoBoost, which costs about the same but offers a lot more motive force. And if you want the best that the hachi-roku has to offer, you might want to look at the BRZ and its available Performance Package for less than $30,000.

We really do like the 2017 Toyota 86. Still, we can't help but feel that it's a missed opportunity. Horsepower isn't everything, but it's also not nothing. If the 2016 Scion FR-S was a turbocharger or an extra half-liter of displacement short of perfection, then so is the 2017 Toyota 86.