Seriously, this thing deserves a hug.

Joel Stocksdale
The Daihatsu Move Canbus is too adorable to ignore, even though don't frequently cover cars outside of the US market. Just look at its face. It's so cute that fascia just seems too cold a term to use. Those big round headlights and upturned grille make for a relentlessly cheerful look. It even has a little circular chrome badge for a nose! The bleakest Monday morning would be a little brighter if this was in your driveway to greet you. The cute appearance is enhanced by the cheerful retro colors and additional chrome trim.

Even the Canbus's name is positive. Daihatsu's press release explains that it combines the verb "can" to describe the van's ability to do almost anything, with the noun "bus" to describe the shape of the car. This car literally has can-do attitude in the name. It's also the name for the internal communications hub for a car's computer, which is totally can-do. 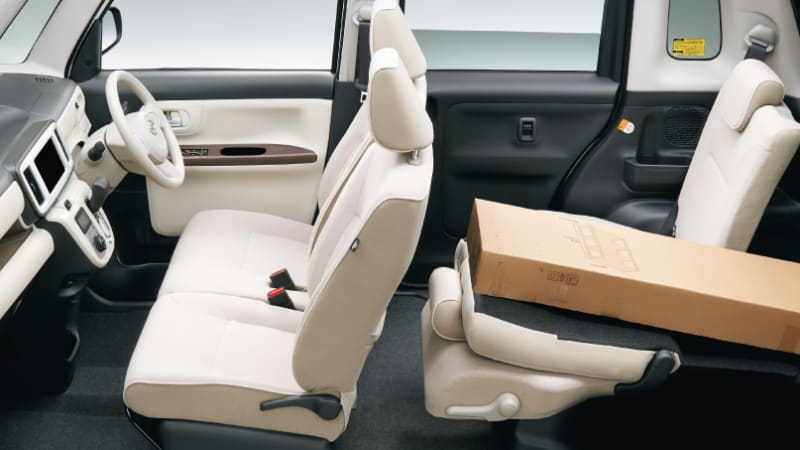 Now all the positivity in the world won't let this van accomplish everything. Compared with most vehicles from other markets, the Move Canbus a miniscule car. It falls into the "kei" class of Japanese cars which are incredibly small and have an engine displacement limit of 660cc.

It makes good use of its limited space though. The rear seats can slide fore and aft to allow for more cargo space or rear legroom. It also has little drawers under the seats for extra storage, and they can slide out to hold bags. Plus, check out the retro interior with bench seats front and rear. Those seats can also be decked out with washable covers in four styles, including, for some reason, licensed Disney designs.

We're not saying we think this van should come here, even though it totally should. As much as the Autoblog staff loves tiny Japanese cars, they're not safe in the land of F-450s and Ram Power Wagons. However, we want to acknowledge interesting car design, which this Daihatsu has, and we wouldn't mind seeing another company's take on the look. In fact, we believe a certain German automaker would be the perfect candidate for producing cute, retro van.